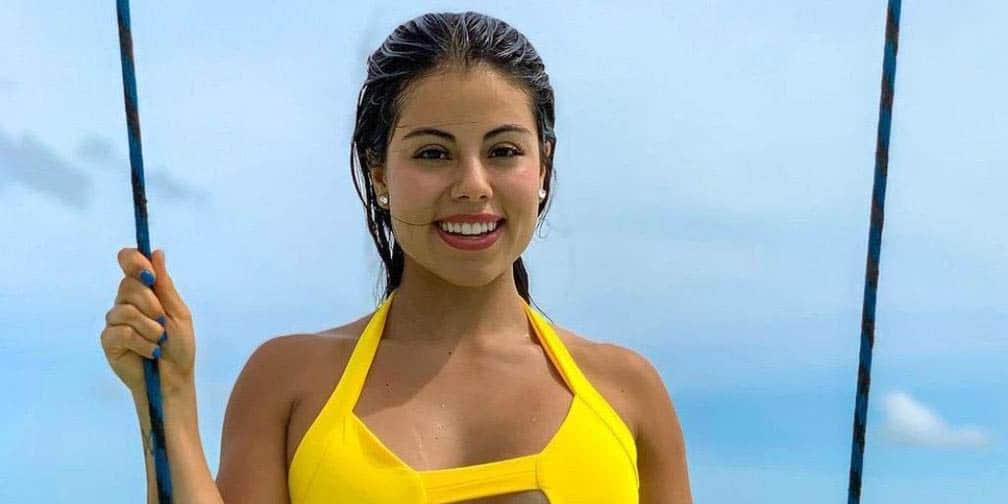 Steffy Moreno is a famous Colombian model and YouTuber, who became an internet sensation through to her travel and fitness-based content. Although Steffy is an internet personality, she never shares details about her personal life. In this article, you’ll discover everything you need to know about the popular Content Creator. Stay with us.

Steffy Moreno was born on 1 December 1992 under the zodiac sign of Sagittarius, in Medellin, Colombia, to parents of Latin American ancestry, which is thus her ethnicity; she holds Colombian nationality.

Steffy was raised in a Christian family, and her religious background is the basis of her strong faith in God. As for her early life and educational background, not much is known; ss a young girl, Steffy had dreams of studying Forensic Medicine in college. She was always intrigued about the exact cause of death. because her parents watched many TV crime shows. However, as Steffy got older, she realized that she would feel more fulfilled traveling the world.

This inspired her to enroll into intensive training, after which she became a flight attendant. She only came into the limelight when she began sharing travel videos on her YouTube channel.

Steffy Moreno single-handedly grew her largest fanbase on YouTube, the most popular video streaming platform of all time. She created her self-titled channel on 11 February 2016, but didn’t post until the following year. In November of 2017, Steffy Moreno uploaded her first YouTube, video captioned “Lisboa-Portugal| Focus on the Adventures”, thus kicking-off her career as a travel vlogger, sharing stories of her adventures in different countries, and soon enough, the subscribers came trooping in.

Some of her earliest videos are from 2018 – “Pisa-Italy| Leaning Tower, and I Joined the Mimes”, “Marina Bay Sands- Singapore| What a Stunning Hotel”, and “Siem Reap- Cambodia|Weirdest Food (Insects) I Have Ever Tried”

On 4 November 2018, Steffy released a video detailing her Halloween celebrations in Medellin. She dressed up as a spooky nun, and pranked some children in the Viva Mall, Envigado. Within the next few weeks, Steffy released her first yoga tutorial on her channel – “Yoga básico para principiantes| 8 mins de relajación mental y corporal” (2018).

In her vlog “50 Cosas Sobre Mi| Steffy Moreno” (2018), she answered 50 personal questions about herself. Her channel grew steadily, and Steffy became a celebrity of sorts in the YouTube lifestyle community.

This move attracted even more followers, and her channel became the hottest thing on YouTube.

On her videos, Steffy speaks Spanish with English subtitles, but she does speak English once in a while for her Anglophone followers.

Some of Steffy’s most recent videos include “XHALE CLUB Breathless Resort- Highest Level of Luxury” and “Breathless PUNTA CANA Resort & Spa: Relaxation and Entertainment” and “Exploring the TATACOA DESERT”, all in 2021.

While filming and producing her vlogs, Steffy doesn’t hire the services of a production team, instead, her family, close friends (whoever she travels with) help her record videos for YouTube. She also uses tools such as a Stabilizer, Go Pro, Drone, and a professional camera to create high-quality videos.

Steffy Moreno now has almost 700,000 subscribers, and has attracted 135 million views of her 152 videos on her YouTube channel.

Steffy Moreno’s influence has spread from the confines of YouTube to other social platforms. On her TikTok page (@steffymoreno2), she has over close to two million followers and over eight million total likes; she often shares videos of herself having fun with her friends.

Steffy’s job as a model and lifestyle vlogger tales her to different parts of the world such as Bruges, Cappadocia, Vietnam, Tulum, Punta Cana, among many other fascinating spots.

Steffy Moreno once mentioned in a YouTube video that ‘even though she travels with her family, she never reveals them because they are shy and reserved.’ She also shared that her passion is to travel the world. In her words, ‘I love meeting new cultures, customs, people. Trying new food, etc. I learn better when I live the experience’.  She loves studying the history of people and places.

In a Question & Answer session with her YouTube subscribers, Steffy shared the qualities her ideal man would possess; ‘an interesting man who is focused and knows what he wants, treats me with respect and shows his love for me through actions.’

She emphasized that she never falls for material things. At the moment, we are unaware of Steffy’s relationship status, but apparently single.

The YouTube star loves intense sports such as bungee jumping, rappelling, paragliding, and rafting. If Steffy could live anywhere, it would be San Andres Island. However, she still lives in Medellin, Colombia.

The 28-year-old YouTuber has long black hair and a pair of brown eyes. She’s is 5ft 4ins (1.62m) tall, weighs around 145lbs (65kgs), and is known for her curvy body and chiseled abs, which she gets from her fitness lifestyle. She likes to wear bikinis showing the butterfly tattoo on her right hip, seductive dresses, and the occasional pair of sweatpants.

As of late 2021, Steffy Moreno has an estimated net worth of close to  $500,000, earned from Google Adsense and collaborations with high-end fashion brands. Property owned by Steffy Moreno and her family remains undisclosed to the public at this time.