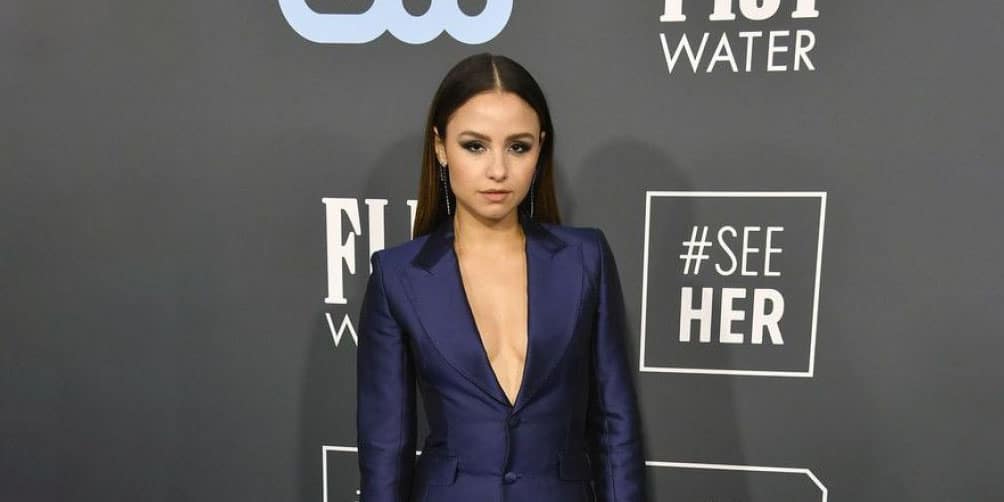 Aimee Carrero (aka Mia on Hannah Montana) Net Worth, Height

Who is Aimee Carrero?

Aimee Veronica Carrero Vila was born in Santo Domingo, Dominican Republic, on 15 July 1988 – her zodiac sign is Taurus, and she holds both American and Dominican nationality. She’s an actress with close to 50 credits to her name, perhaps known best for her voicing of Princess Elena and several other characters in the animated action adventure series “Elena of Avalor”. It was created by Craig Gerber, starred Aimee, Jenna Ortega and Christian Lanz, and follows Elena, the Princess of Avalor, who has to learn to rule her kingdom; the series aired from 2016 to 2020, and won 13 of the 43 awards for which it was nominated, including a Primetime Emmy nomination.

Aimee was raised alongside her younger brother in Miami, Florida USA, as they moved there with their parents when Aimee was still very young. Their father Rodney Carrero is Puerto Rican, and their mother Mary Carrero is Dominican.

Aimee grew up being interested in acting, and was nine years old when she joined her elementary school’s drama club. She could’ve been seen appearing in various plays performed at the school, and then continued acting upon enrolling at a local high school. Aimee was into several other activities during her time there, including playing soccer, dancing and singing.

Upon matriculating in 2005, she enrolled at Florida International University, and then launched her acting career two years later, with her roles in two short movies: “Category 4” and “The Essential Man”.

Aimee graduated with a Bachelor’s degree in international relations in 2008.

She made her debut TV series appearance in 2009, with her portrayal of Cassie in the episode “Blood Brothers” of the mystery crime drama “The Mentalist”, while the following years saw her play supporting characters in several popular series, such as the musical family comedy “Hannah Montana”, the family drama “Lincoln Heights”, and the comedy drama “Men of a Certain Age”.

Aimee gained recognition in 2012, when cast to star as Angie Prietto in the popular action science fiction comedy “Level Up”, created by Derek Guiley and David Schneiderman, and which also starred Gaelan Connell and Connor Del Rio. It follows several teenagers who are now facing video game monsters in real life.

In 2014, Aimee portrayed Sydney in the episode “Romancing the Phone” of the family comedy drama “Baby Daddy”, and the same year saw her play the supporting character Lucia in the mystery crime drama “The Americans”.

Between 2014 and 2018, she played Sofia Rodriguez, one of the lead characters in the critically acclaimed romantic comedy drama “Young & Hungry”, created by David Holden, and which also starred Emily Osment and Jonathan Sadowski. The series follows an entrepreneur who has hired a food blogger to work as his personal chef; it was nominated for 10 awards.

Three of Aimee’s most recent roles in TV series have been in 2021, in the adventure fantasy “Exandria Unlimited”, the drama “Maid” and the fantasy comedy “Narrative Telephone”.

In 2009, Aimee was cast to play Emily in the popular animated adventure comedy “Alvin and the Chipmunks: The Squeakquel”, directed by Betty Thomas, and which starred Jason Lee, Zachary Levi and David Cross. The film follows a singing group of chipmunks who have returned to school, and met their new rival, The Chipettes; it won three awards.

A couple of her following roles were in the 2010 short drama “Never Winter”, the 2012 romantic drama “Blue Lagoon: The Awakening” and the 2014 mystery horror “Devil’s Due”. We then saw her play Miranda in the 2015 action fantasy adventure “The Last Witch Hunter”, directed by Breck Eisner, and which starred Vin Diesel, Rose Leslie and Elijah Wood. It follows the last witch hunter, who has to defend humanity from witches who only he can kill; the movie was nominated for a Golden Trailer Fleece Award.

Three of Aimee’s most recent film roles have been in the 2018 short thriller “Dylan”, the 2020 drama “Wander Darkly” and the 2020 romantic comedy “Holidate”.

Aimee sang four songs in three episodes of the series “Elena of Avalor” in 2016.

She has made a guest appearance in various talk-shows, such as “Red Carpet Report”, “Rachael Ray” and “Good Morning America”.

Aimee has won two of the five awards for which she’s been nominated. She won a 2018 Behind the Voice Actors Television Voice Acting Award for Best Female Lead Vocal Performance in a Television Series, for “Elena of Avalor”, and a 2018 Cinema at the Edge Independent Film Festival Jury Award for Best Actress, for “Dylan”.

She was also nominated for a 2017 Imagen Foundation Award, a 2018 Idyllwild International Festival of Cinema Grand Jury Award, and a 2018 Chicago Horror Film Festival Jury Award.

Aimee prefers to keep the details of her love life to herself, but it’s still widely known that she’s today a married woman. On 20 August 2016, Aimee married her long-term boyfriend Tim Rock in a private ceremony attended by many friends and family members. Tim’s an American actor, film writer and producer, who has been credited with appearing in close to 30 movies and TV series, while he’s perhaps still known best for his portrayal of Michael Zamperion, in the 2010 mystery science fiction series “Flashforward”. Both Aimee and Tim seem to be focused on their careers, and their fans believe this to be the reason behind them still not having children together.

Neither of the two have spoken of any other people whom they might had been with prior to meeting each other, so as of November 2021, Aimee’s married to Tim Rock, and doesn’t have children.

Aimee’s highly active on Instagram, and seems to be enjoying the attention which she’s receiving from her close to 300,000 followers; she’s uploaded over 150 pictures onto the network, the majority of which have been taken during her everyday life.

She has multiple training sessions at the gym every week, mostly because it’s important for her acting career to stay fit; Aimee has uploaded several pictures onto her Instagram account, which feature her at the gym.

Her favorite season is summer, as she enjoys sun tanning at the beach, and going yachting.

Aimee’s a dog-lover, and her pet dog can be seen featured in some of her Instagram pictures.

She has her own favorite actors and actresses, some of whom are Robert De Niro, Leonardo DiCaprio and Angelina Jolie, while her favorite movies include the trillogy “The Godfather”, “Catch Me If You Can” and “Wanted”.