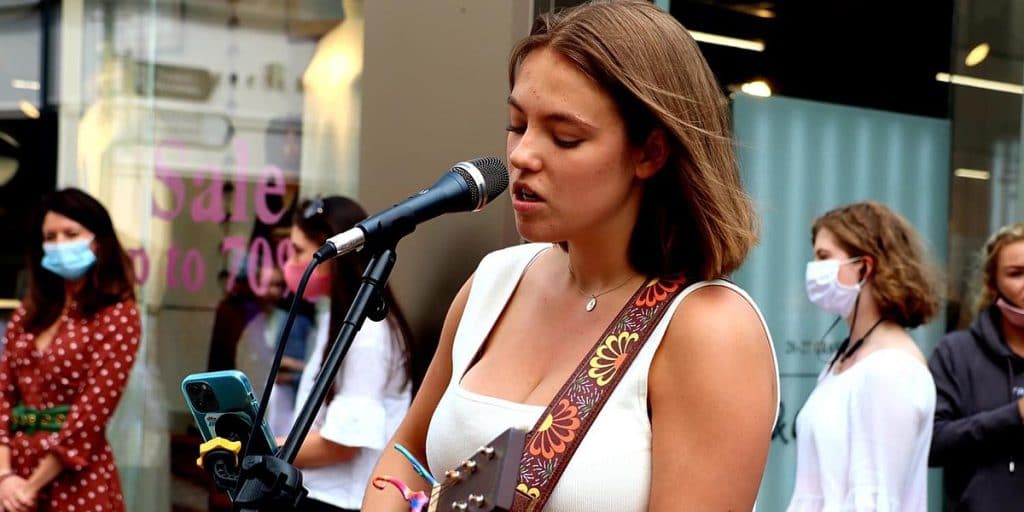 Who is Allie Sherlock?

Allie Sherlock is an Irish musician, singer and songwriter, who achieved fame through her YouTube channel on which she uploads videos of cover songs of such popular artists as Billy Joel, Ed Sheeran, Kings of Leon, and many others. She has been able to launch a professional career, and has released her own music.

Allie Sherlock was born on 7 April 2005 under the Aries zodiac sign, in Douglas, County Cork, Ireland, the daughter of Mark Sherlock, while her mother died when she was 9 years old and her name has been omitted from the media.

She went to a primary school in her hometown, however, she was forced to leave school due to constant bullying in 2016, and her father hired a tutor so his daughter could be homeschooled. Allie found solace in music, and began singing and playing guitar, though her father at first objected, but later started supporting her and even performing with her on Grafton Street, one of the two principal shopping streets in Dublin city center.

While the two performed on the streets of Dublin, Allie’s father would record videos of her, and upload them on Allie’s official YouTube channel, which was launched in 2014.

She started to be noticed by random people who would stop to listen to her perform, and later subscribe to her channel. Gradually she was becoming more popular, and as she got older, she started making her own music ,and looking for a way into professional waters.

Young Allie was slowly turning into a star, and more people were following her on YouTube, and also listening to her live performances on the streets.

Encouraged by her early success, Allie auditioned for the 12th season of the immensely popular show “Britain’s Got Talent”, but her talent only got her to the second round before she was eliminated. However, this didn’t discourage her, as she caught the eye of many important people, which led to a performance at the 2017 Miss Universe Ireland pageant.

Moreover, she released her debut self-titled album, which features 10 tracks such as “Beneath Your Beautiful”, “Let It Go”, and “Lovesong”.

She made a guest appearance in “The Ellen DeGeneres Show”, singing “Million Years Ago” originally by Adele, while later the same year she sang “Perfect” by Ed Sheeran in “The Ray D’Arcy Show”. These two performances secured her a five-year contract with Patriot Records, which is owned by Ryan Tedder, the singer of OneRepublic.

Since then, she has become a star with more than five million subscribers on her YouTube channel, and over 800 million views, with some of the most popular videos being a collaboration with Fabio Rodrigues with over 50 million views, and her cover of the popular song “Shallow”, which has over 17 million views, among many other videos.

Furthermore, Allie released her second album, “A Part of Me” in June 2020, which has 12 tracks, and has performed her songs throughout Ireland, including at the Olympia Theatre, Dublin in April 2019, and around Europe at such venues as the Elbphilharmonie Concert Hall in Hamburg, Germany, and was one of the supporting acts for OneRepublic in Paris, Cologne and London, among others. She teamed up with a collective of female artists called “Irish Women in Harmony”, with whom she recorded a version of the popular song “Dreams”, originally performed by the Irish Rock band The Cranberries, in support of a domestic abuse charity.

When it comes to her personal life, Allie was rumored to be dating another street performer Cuan Durkin. However, the two are just good friends and sometimes perform together, therefore the confusion. According to reports, Allie is currently single and focused on her career and academics, rather than finding a boyfriend.

As of late 2021, Allie Sherlock’s net worth has been estimated to be around $2 million at still just 16, earned through her successful career as a musician and singer.

Allie hasn’t just been singing songs and playing guitar, as she’s a songwriter as well. Her songs deal with her personal life, and the song “The Night Before” is about her mother’s death, while the song “Hero” is about self-confidence, and “Locked Inside” talks about her feelings during the Covid-19 quarantine period.

Before appearing in “The Ellen DeGeneres Show”, she refused the popular TV host the first time, as she wanted to focus on her singing without being judged and seen by half the world, but the second time she was invited, Allie accepted it and received a standing ovation.

She is physically active, and enjoys doing gymnastics as it is her second love after music. Moreover, she loves playing soccer, and often watches soccer matches.

She is a social media star with over 1.7 million followers of her official Instagram profile, on which she shares events from her career and personal life.