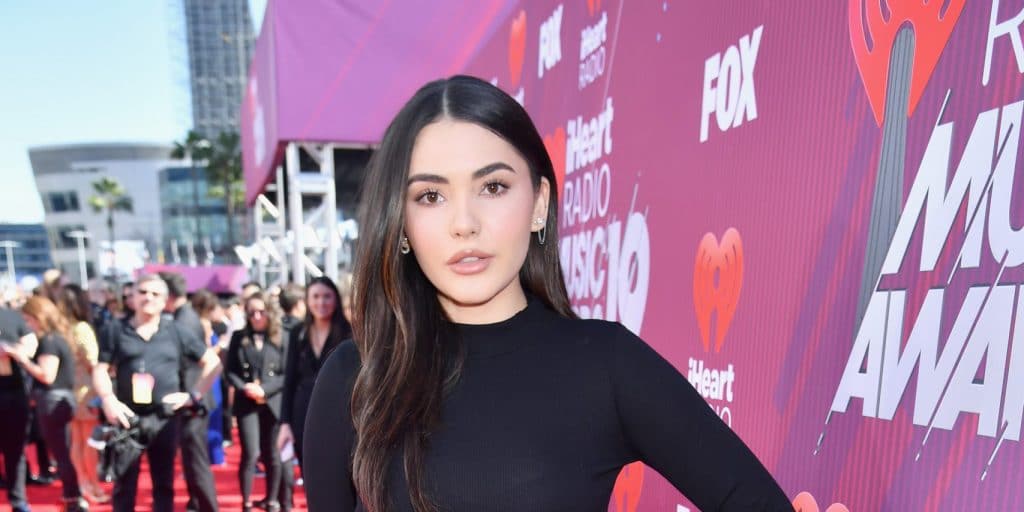 Atiana De La Hoya is an American model and artist, but possibly best known for being the daughter of American boxer Oscar De La Hoya. However, she is much more than ‘just a daughter.’ Keep reading to learn all there is to know about Atiana.

Atiana’s parents broke up a few months before her first birthday, after Shanna found that Oscar was cheating on her. Shanna Moakler moved on a few years later, when she married celebrity drummer Travis Barker in 2004 when Atiana was just five years old. They divorced two years later, but still had an on-and-off relationship, and had two children together, Landon and Alabama Barker.

The duo finally separated in 2008, but Barker remained an influential presence in his stepdaughter’s life.

Atiana matriculated from high school in 2017 – her parents reunited to be there on her big day.

Between 2005 and 2006, Atiana starred MTV’s reality show “Meet the Barkers”, alongside her mother, stepfather Travis Barker, and half-siblings, which documented the everyday life of a celebrity couple living wild and free in California. It aired on MTV for two seasons, ending with Shanna and Travis’ divorce.

Because Atiana grew up around famous people, she gained visibility at an early age. She started modeling at age 14, but gave it up for a normal teenage life. In an interview with Page Six, she said, ‘I just wanted to hang out with friends. I didn’t want to have a career or work’. However, Atiana recently returned to the modeling scene, signing with LA Models, and has since appeared in Agent Provocateur’s lingerie launch.

She was also the cover girl for Galore’s June 2021 Youth Issue, and in the same month she was photographed by Josh Ryan for Maxim Magazine, wearing Natalia Fedner’s barely-there lingerie ensemble.

Due to her large following of over 280,000 on Instagram (@atianadelahoya), Atiana has also partnered with numerous fashion/beauty companies, such as TooFaced, Skechers, and Dior.

Atiana is an artist and has been for some time, however, she only began making it a career in 2019. In an effort to create unique Christmas gifts for her family, she started hand-painting random designs on luxury bags and accessories.

Her work received such great commendation that she moved to showing off her skill on Instagram, so landing new customers. Most of Atiana’s artwork features UFOs, skulls, three-eyed aliens, and eyeballs, and according to her, ‘is very outer-space inspired.’ In 2020, she painted a realistic skull onto Travis Barker’s Louis Vuitton suitcase.

She has worked with Machine Gun Kelly, Young Blud, and K-Thrash, among others, while often displaying her work on her business page @artbyatiana.

Atiana is still somewhat indecisive on which branch of the Visual Arts she should focus. In her words, ‘anyone open to letting me scribble on their bag, I’m more than happy to do so.

The model still has a close relationship with her stepfather, Travis Barker, joining him on vacation to Aspen with his new girlfriend, Kourtney Kardashian. During the pandemic of 2020, Travis moved in with Atiana, her mother and half-siblings to spend time as a family.

Atiana still lives in Los Angeles with her rabbit, Jeffery.

Who is Oscar De La Hoya?

Oscar De La Hoya is a retired American professional boxer and Mixed Martial Arts promoter. He was born on 4 February 1974 under the zodiac sign of Aquarius in East Los Angeles, California USA. He’s of Mexican descent and holds American nationality.

Oscar was born into a family of fighters; his grandfather Vincente was an amateur fighter in the 1940s, and his father was a professional boxer in the 1960s, so Oscar and his brother Joel Jr. followed in their footsteps.

At 17, Oscar was the youngest American boxer at the 1990 Goodwill Games, where he won a gold medal. The joy of winning was dampened as he learned that his mother was terminally ill with breast cancer; she later died on 28 October 1990, and her dying wish was that Oscar would become an Olympic Gold medalist.

This fueled Oscar’s preparation for the 1992 Summer Olympics, during which he was nicknamed the ‘Golden Boy’ because of his successive victories, and after which he won the gold medal at the Barcelona Olympics. De La Hoya’s amateur career included 234 wins and only six losses.

Oscar De La Hoya made his professional debut on 23 November 1992 and scored a first-round TKO Victory. He won his first world title at 20, and defended the title once against Giorgio Campanella. Oscar competed from 1992 through 2008. In his career, he won 11 World Titles in six weight classes, and is ranked by BoxRec as the 29th best boxer of all time.

After a 13-year absence from boxing, De La Hoya was billed to make his comeback in the ring against Victor Belfort, but tested positive for COVID-19 and was replaced with Evander Holyfield.

TMZ Sports recently revealed that Oscar offered Floyd Mayweather (who defeated Oscar once) $100 million to meet him in the ring.  Mayweather’s team has disclosed his readiness to take on De La Hoya in the ring.

Oscar started dating actress/model Shanna Moakler in October 1997. They announced their engagement in October 1998, and welcomed their daughter Atiana in March 1999. The couple never married, and their relationship ended in September 2000, with Shanna filing a palimony suit for $62.5 million, claiming that Oscar was an alcoholic, abusive to her, and used their daughter to boost his public image. They settled out of court for an undisclosed amount in 2001.

Oscar married Puerto Rican singer Millie Corretjer on 5 October 2001, and they have three children together. They divorced in 2016 but are still recognized publicly as a couple.

As a fashion model, Atiana’s clothing style is ever-changing, and it depends on her mood or theme of an event.

As of late-2021, Atiana has an estimated net worth of $1 million, while her mother Shanna is reputedly worth $15 million. Oscar De La Hoya, is worth over $200 million, while Travis Barker is reportedly $50 million to the good.