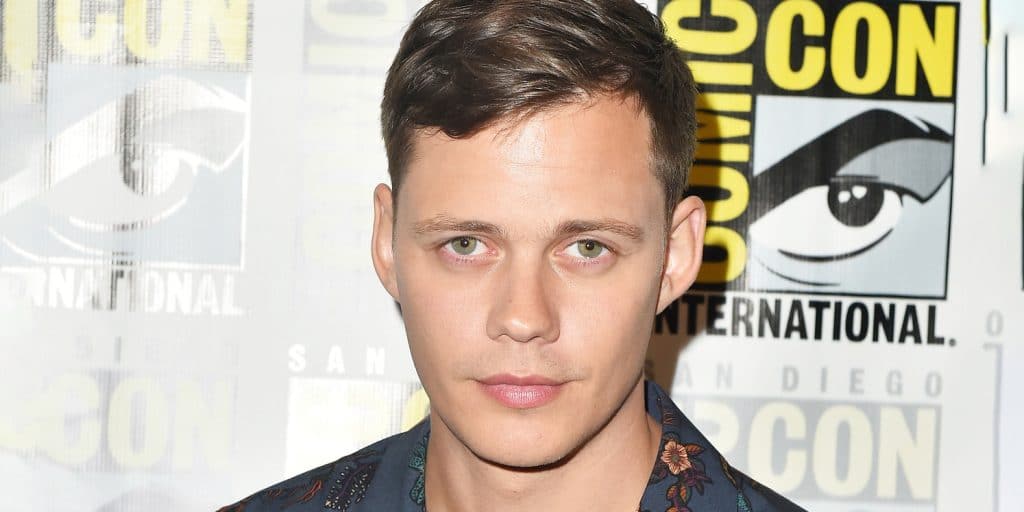 Who is Bill Skarsgard?

Bill Skarsgard is an award-winning Swedish actor, perhaps best known to the world as Pennywise in the films “It” (2017), and “It Chapter Two” (2019), and also as Zeitgeist in the film “Deadpool 2” (2018), in addition to many other roles that he’s secured so far in his career.

Born Bill Istvan Günther Skarsgård on 9 August 1990 under the Leo zodiac sign in Vällingby, Stockholm, Sweden, he is the son of the acclaimed actor Stellan Skarsgard and his first wife My Sonja Marie Agnes. He has five brothers, Alexander, Gustaf and Valter who are all actors, Eija who is a model, and Sam.

The actors’ brothers are rather famous, as Alexander is a Primetime Emmy Award-winning actor for his work on the TV series “Big Little Lies”, then Gustaf, who has won several awards in his career, and is probably best known to the world as Floki in the historical action-drama series “Vikings”. Valter is best recognized as Bard Guldvik ‘Faust’ Eithun in the film “Lords of Chaos” (2018).

Moreover, Bill is an older half-brother to Ossian and Kolbjorn, who are children of Stellan Skarsgard and his second wife Megan Everett.

Bill became interested in acting when he was in elementary school, and at 10 years old made his acting debut, but was then mostly focused on his education.

So Bill made his debut on the big screen in 2000, as Klasse in the Swedish film “White Water Fury”, known as “Jarnganget” in Sweden, also starring his brother Alexander, alongside Emil Forselius and Rafael Edholm. His next role came in 2002, in the TV min-series “Laure Trenter – Dad, the Policeman”, before returning full-time in 2007, with the role of Victor in the short film “Spending the Night”, and in 2008 playing Erik in the romantic action-drama film “Arn: The Kingdom at the End of the Road”, with Stellan Skarsgard in the lead role, next to Joakim Natterqvis and Sofia Helin.

The following year saw him star in the sci-fi action comedy film “Kenny Begins”, with Johan Rheborg and Carla Abrahamsen, and continue his career with prominent roles in the films “Simple Simon” – starring in the titular role – and the same year starring in the drama film “Behind Blue Skies”. In 2011, he co-starred alongside Alicia Vikander and Loa Falkman in the drama film “The Crown Jewels”, and the same year had the lead role in the award-winning drama film “Simon & the Oaks”, with Jan Josef Liefers.

Bill was making a name for himself as an actor, despite being somewhat overwhelmed by the success of his father and siblings. He was Roman Godfrey in the Primetime Emmy Award-nominated fantasy horror-drama series “Hemlock Grove”, starring in 33 episodes from 2013 to 2015, and then in 2016, he was Matthew in the action mystery adventure film “Allegiant”, with Shailene Woodley, Theo James and Jeff Daniels as the main stars of the award-winning film.

He was rather busy in 2017, first in a supporting role in the action thriller film “Atomic Blonde”, which starred Charlize Theron, James McAvoy, and John Goodman, then chosen for the role of Pennywise the Dancing Clown in the horror film “It”, based on the novel of the same name by Stephen King; he reprised the role in the sequel “It Chapter Two” in 2019, with his portrayals launching him to stardom, as he received high praises from both critics and fans.

He continued his career with the television role of The Kid in the TV series “Castle Rock” (2018-2019), and then in 2019 played Mickey in the horror comedy-drama film “Villains”, co-starring Maika Monroe and Blake Baumgartner. Next, he joined Tom Holland and Riley Keough in the thriller crime-drama film “The Devil All the Time”, while most recently he starred with John Boyega and Olivia Cooke in the award-winning comedy crime-drama film “Naked Singularity” (2021).

He is currently working on a number of projects, as it feels that the years of fame are upon him and his career. He is set to portray Clark Oloffson in the TV series “Clark”, about Sweden’s most notorious gangster, whose actions contributed to the Stockholm Syndrome popularity. Moreover, he will feature in the fourth installment of the popular action film “John Wick: Chapter 4”, and will appear in the film “Burn All My Letters”.

Bill Skarsgard doesn’t talk much about his love life, though it’s known that he’s in a long-term relationship with Swedish actress Alida Morberg. The two met in 2016 while on set, and after a few weeks of friendship, they got together, and in 2018 Alida gave birth to their daughter.

As of late 2021, Bill Skarsgard’s net worth has been estimated to be around $5 million, earned through his successful career as an actor, during which he has already appeared in 40 film and TV titles, all of which have added to his wealth.

This prominent actor has short brown hair and green eyes. He stands at a height of 6ft 3ins (1.92m), while he weighs approximately 195lbs (88kgs). His vital statistics are currently unknown, though he has an athletic figure.

Bill is rather active outdoors, and enjoys various winter sports, including skiing and snowboarding. Moreover, he maintains his perfect form and figure by training in the gym a few times a week.

Although he’s rather tall, all his siblings are taller than him – he’s the shortest in the family. He’s maintained a great relationship with the entire family, including half-siblings, and they all spend time together, especially for holidays.

Bill is an avid traveler, and prefers exploring Europe rather than the USA. Moreover, he aspired to travel the Trans-Siberian railway, however, his acting career took off, and he hasn’t  had time for it so far.

He isn’t active on social media, so doesn’t share all the aspects of his personal life with the fans and the media.