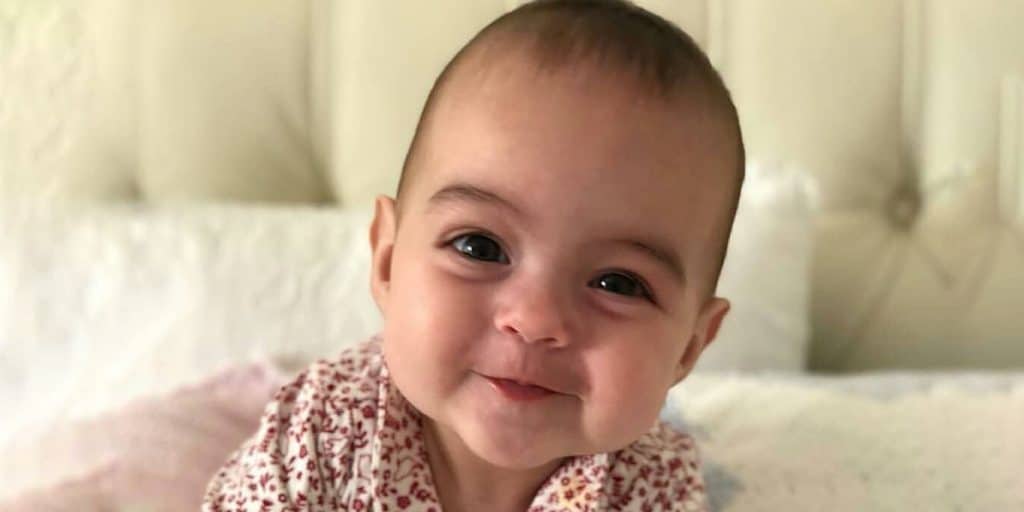 Alana Martina dos Santos Aveiro was born in Madrid, Spain, on 12 November 2017 – her zodiac sign is Scorpio, and she holds Spanish nationality. She’s only known for being the daughter of the Portuguese professional soccer player Cristiano Ronaldo dos Santos Aveiro, and his girlfriend Georgina Rodriguez, who’s a Spanish model.

Alana is being raised alongside her half-brother Cristiano Jr., who was born in the USA on 17 June 2010; nothing about Cristiano Jr.’s mother is known, as his father prefers to keep her away from the media’s attention. Alana also has two non-biological siblings, the twins Eva and Mateo, who were born via surrogacy on 8 June 2017.

Between 2010 and 2015, Alana’s father was in a relationship with the Russian model Irina Shayk, and then began dating Alana’s mother in 2016. There are rumors circulating the internet claiming that Cristiano and his girlfriend Georgina are planning to marry, but this hasn’t been confirmed.

Who is her father Cristiano Ronaldo?

Known professionally as simply Cristiano Ronaldo, he was born in Sao Pedro, Funchal, Madeira, Portugal on 5 February 1985 – his zodiac sign is Aquarius, and he holds Portuguese nationality. He’s widely believed to be one of the best soccer players in the world, and Cristiano has won various awards, including four European Golden Shoes and five Ballon d’Or awards, which is a world record; he holds several other records, including for both assists and goals in the UEFA Champions League.

He was raised in Santo Antonio, Funchal alongside his three older siblings, by their father Jose Dinis Aveiro who was a gardener and kit man, and their mother Maria Dolores dos Santos Viveiros da Aveiro, who was a housewife. While pregnant with Cristiano, Maria wanted to have an abortion, because the family lived in poverty, and her husband was an alcoholic, however, the doctor refused her request. While growing up, Cristiano and his siblings shared the same bedroom. Cristiano’s mother suffered from breast cancer in 2007 but recover – his father died of a liver condition in September 2005, aged 52.

Cristiano became interested in soccer at a very early age, and joined his first club, Andorinha, when he was seven years old. Cristiano played with them for three years, before moving on to Nacional, where he spent two years. He was 12 when he was signed to Sporting Clube de Portugal in Lisbon for $2,000. He was 14 when his mother agreed that he could quit school, and focus solely on soccer; not long after this, Cristiano was diagnosed with a racing heart, and underwent surgery to fix it.

He was 16 when he started playing for Sporting’s youth team, then in April 2003, aged 18, Manchester United paid $16.5 million to have Cristiano play for them, which made him the most expensive teenage soccer player in the sport’s history.

Cristiano got to wear the number 7 shirt, which was previously worn by David Beckham.

After seven years with Manchester United and several title wins, Cristiano joined Real Madrid for $110 million, a record at that time; he was given the shirt number 9, as his teammate Raul was already wearing number 7, which he took over after Raul left Real Madrid during the 2010-2011 season. Cristiano stayed with Real Madrid until 10 July 2018, when he signed a $120 million contract with Juventus; just recently, on 27 August 2021, Cristiano signed a two-year contract to return to Manchester United.

The two best soccer players in the world are currently believed to be Cristiano and Lionel Messi. Both have scored more than 50 goals in a single soccer season, have won numerous awards, and have also scored in several UEFA Champions League finals. Cristiano has also stated that their rivalry has helped him perform better, while Lionel says that there’s no rivalry between the two.

Cristiano is a philanthropist, who has donated money to numerous charity organizations. In 2004, he helped raise money for those hit by the 2004 Indian Ocean earthquake and tsunami, while he then donated over $100,000 to a hospital in Madeira, Portugal which saved his mother’s life. In 2015, he donated more than $5 million to the people of Nepal who were hit by an earthquake, and in the following year, Cristiano donated his soccer bonus of over $600,000 to various charity organizations.

Who is her mother Georgina Rodriguez?

Georgina Rodriguez was born in Jaca, Spain on 27 January 1995 – her zodiac sign is Aquarius, and she holds Spanish nationality. She’s a model, dancer and a social media star, but who’s probably known best for being Cristiano Ronaldo’s girlfriend.

Georgina was raised in Jaca alongside her sister Ivana Rodriguez, by their parents Ana Maria Hernandez and Jorge Rodriguez; her sister is an Instagram star, who’s today followed by close to 400,000 people. Not a lot is known about the girls’ parents, as they prefer to be left out of media.

Georgina was only four years old when she started taking dancing lessons, and she began entering competitions aged 10.

She attended a local high school in Jaca, and upon matriculating in 2013, moved to Madrid where she continued dancing, and also began working at a Gucci boutique. She has since launched her modelling career, and has been featured in many popular magazines, such as “Women’s Health”, “Love Magazine” and “VIP Magazine”; Georgina could also have been seen featured on the cover page of the Italian magazines “Diva E Donna” and “Lux”.

She’s also highly popular on Instagram, and has amassed more than 27 million followers, and has uploaded over 630 pictures, most of which have been taken during her everyday life, and which often have Georgina’s large breasts in focus.