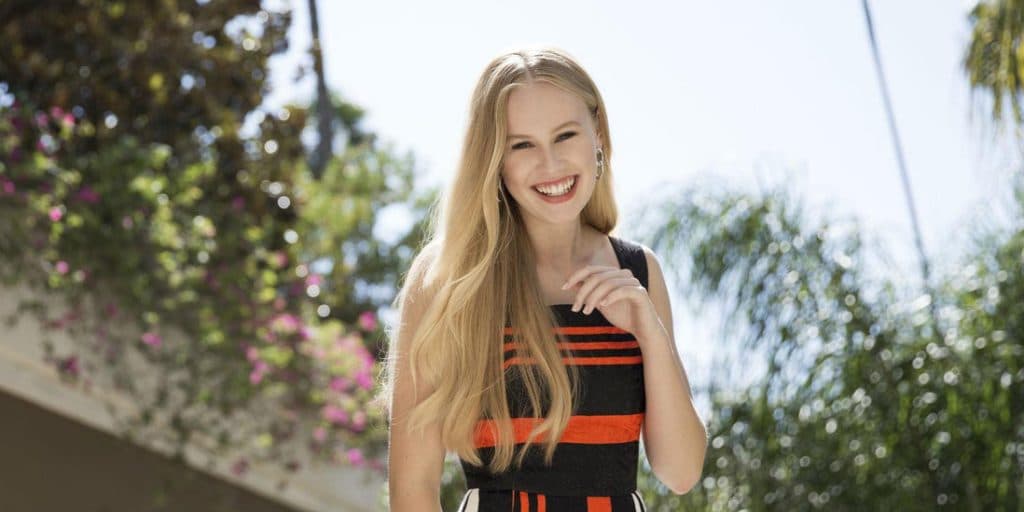 Who is Danika Yarosh?

Danika Yarosh was born in Morristown, New Jersey USA, on 1 October 1998 – her zodiac sign is Libra, and she holds American nationality. She’s an actress, perhaps known best for her role in the Nickelodeon sitcom “See Dad Run”, as well as for playing Holly Herkimer, in the Showtime comedy drama “Shameless”.

Danika was born the third of four siblings to Victor and Linda Yarosh. Her older sister, Amanda is also an actress, while her father is a former member of the US Air Force. Danika comes from a diverse ethnic background, as she is of Russian, Ukrainian, Swedish and Danish descent.

After matriculating from a local high school in 2017, she planned to study biology at university, but eventually deferred her studies after landing a role in “Heroes Reborn”, and moved to Los Angeles, California, where she still resides.

Danika made her film debut at the age of six, with an uncredited role in the 2004 sci-fi comedy horror “The Stepford Wives”, directed by Frank Oz, and which starred Nicole Kidman, Bette Midler and Matthew Broderick.

Six years later, she appeared alongside her mother Linda, in the short comedy “Crush”, centered on an 11-year-old girl falling in love for the first time. In the following year, she had roles in several other short movies, including “A Breath Away”, “Angels” and “Nerd Wars!”

In 2012, Danika appeared in the thriller “Retribution”, written by Richard Eden and Shannon Hile, and directed by Michael Feifer. In the same year, she had a supporting role in the biographical movie about the Pulitzer prize-winning writer C.K. Williams entitled “The Color of Time”, which starred James Franco, Mila Kunis and Jessica Chastain.

After exclusively working on TV series for four years, in 2016 Danika played Tom Cruise’s daughter in the blockbuster crime action thriller “Jack Reacher: Never Go Back”, centered on a man on the run from law, who is trying to uncover the truth behind a major government conspiracy theory.

Two years later, she starred in the sports drama “The Miracle Season”, directed by Sean McNamara, and had a role in the award-winning crime thriller drama “Back Roads”.

Danika’s most recent film role was in the 2019 mystery thriller “Deadly Switch”, in which she played one of the leads alongside Hayley McLaughlin. She is now set to star in the upcoming thriller “13 Steps”, expected to be released in 2022.

Danika made her TV series debut in 2010, when she appeared in an episode of the award-winning documentary series “Celebrity Ghost Stories”. Also in 2010, she made an appearance in an episode of the popular crime drama “Law & Order: Special Victims Unit”; she returned to the series in 2015, playing a different character.

In the following years, she made appearances in several other TV series, such as “30 Rock”, “In Plain Sight” and “1600 Penn”, before landing the recurring role of Olivia in the family sitcom “See Dad Run” in 2013. The series was created for Nick at Nite by Tina Albanese and Patrick Labyorteaux, and starred Scott Baio, Alanna Ubach and Ryan Newman. For her performance in the series, Danika was nominated for the 2014 Young Artist Award for Best Performance in a TV Series – Recurring Young Actress.

In 2013, Danika joined the cast of the 3rd season of the comedy drama “Shameless”, playing the character Holly Herkimer.

“Shameless” – it’s been airing on Showtime network since 9 January 2011, with the 12th and final season set to be released in early 2022. It has been highly regarded by the critics and viewers alike, winning numerous awards, including four Primetime Emmys.

In 2015 and 2016, Danika played the role of Malina Bennet, in the sci-fi drama mini-series “Heroes Reborn”, centered on a group of people with supernatural abilities who are tasked with investigating a terrorist attack in Odessa, Texas. In 2019, she appeared in six episodes of the crime horror “The Purge”, created by James DeMonaco based on the eponymous 2013 film.

Danika has been nominated for four Young Artist Awards, winning once, in 2014, for her performance in the sitcom “1600 Penn”. Furthermore, she was nominated for two Young Entertainer Awards in 2016, for her work in “Law & Order: Special Victims Unit” and “Heroes Reborn”.

Through her career, Danika has managed to keep her love life away from the public eye, thus there aren’t many relevant details available regarding her relationships and romantic affairs. On social media, she can be seen spending quality time alone, or with her closest friends, so she most likely isn’t dating anyone at the moment.

Danika currently appears to be single, hasn’t been married or engaged, and doesn’t have children.

Danika is active on all major social media networks, such as Instagram, where her account numbers over 240,000 followers, and more than 900 posts. She has also launched a TikTok account in August 2020, which now sits at more than 3,000 followers, however, she hasn’t been active on the platform in a while, and hasn’t uploaded a new video in over a year.

On Twitter, Danika has a verified account, which numbers more than 13,000 followers, while she’s tweeted over 4,000 times.

Danika loves to spend time outdoors in  nature, and often goes on hiking or camping trips with her friends, taking some time to unwind from work.

As a child, she used to spend her summer vacations at her grandparents’ ranch, where she learned horseback riding.

She loves watching comedy series in her spare time, with some of her all-time favorites being “How I Met Your Mother”, “Scrubs” and “The Office”, while her favorite actor is Steve Carell.