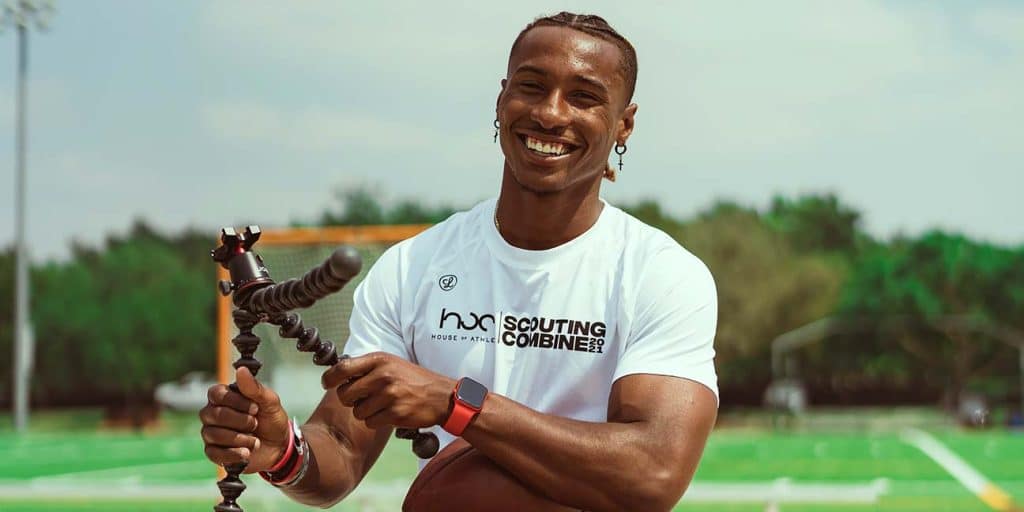 Donald De La Haye, professionally known as Deestroying, is a YouTuber, social media star, and football player who gained popularity posting football-related content and skits on his self-titled YouTube channel. He was born under the Zodiac sign Sagittarius on 2 December 1996, in Costa Rica, and as of 2021, he is 24 years old and holds both American and Costa Rican nationality.

Deestroying was born to parents Donald and Sharon De La Haye. At the age of seven, he immigrated with his parents from Costa Rica to the US and settled in Port St. Lucie, Florida, where he spent most of his formative years and youth. Upon arriving in the US, his father began working as a taxi driver, while his mother found a job as a cleaning lady.

Reportedly, he attended a high school in Port. St. Lucie, during which he developed an interest in sports, particularly football, and played for the school’s team.

Additionally, he strongly leaned toward stand-up comedy, acting, and social media. After matriculating in 2014, thanks to his exquisite physical readiness and abilities, he was given a football scholarship by the University of Central Florida.

In 2015, Deestroying launched his YouTube channel and simultaneously began playing as his university football team’s kick-off specialist. He created his YouTube channel with the goal of making interesting and entertaining sports-related content, such as his video “Football vs. Futbal vs. Rugby”. He quickly began attracting viewers and subscribers, as he incorporated video blogs, funny skits, and story time videos, including “College Football Bowl Game Experience” and “Quarterbacks be like”.

While it seemed that everything was going well for Deestroying, who simultaneously posted YouTube videos, studied at the University, and played football, in 2017, he found himself in a tight spot. The National Collegiate Athletic Association (NCAA), the organization that regulates student-athletes, ordered him to demonetize or delete his YouTube channel due to the organization’s regulation, which forbids its athletes to profit from their athletic abilities or pursue public careers such as YouTube, aside of their scholarship. At this time, his channel had already amassed a strong fan base with over a million subscribers, only making the decision even harder. Deestroying was faced with a tough choice – he could pursue his YouTube career, but only at the cost of his scholarship and NCAA eligibility. He chose to continue making videos on YouTube, and subsequently lost the scholarship and was dropped from the University’s football team.

Additionally, he posted the video entitled “I lost my full D1 scholarship because of my YouTube channel”, making the headlines, in which he said: “They wanted me to give the money away, which is crazy. I worked so hard for it, and they just want me to throw my money away. They want me to take my videos down, which again I worked so hard for. It was very unfair, in my opinion.” He also expressed his anger and disappointment, as he wanted to obtain his degree and finish his education, which at the time seemed a far-fetched idea.

In 2018, Deestroying sued the University and won the lawsuit in November of the same year; interestingly, he wasn’t the only one to suffer a similar fate. Reportedly, this was just one of many cases in which the NCAA imposed regulations on athletes to restrict them from earning money from their names, images, and likeness. Additionally, legislation that allows athletes to profit from their abilities has been issued in Florida and a few other states.

Following the court’s resolution, Deestroying was allowed to finish his education at the University, graduating in 2018.

Even though he stumbled upon a major setback, he continued making videos on YouTube, mainly focusing on recreating football stereotypes in a humorous and comedic manner. Besides his love for sports, he is a great fan of comedy, and Deestroying has been using his channel to combine his two passions – humor and sports. He has created a variety of skits, kicker trick shot videos, and impersonations of popular NFL players such as Tom Brady and Odell Beckham. He also had the opportunity to collaborate with player NFL players including Antonio Brown, Cam Newton and Tyreek Hill.

His most watched videos are entitled “I RACED LOGAN PAUL FOR $100,000.. AND WON! (CHALLENGER GAMES), which counts over 12 million views, and “DOING 1ON1’S AGAINST TYREEK HILL! (FASTEST PLAYER IN THE NFL) FT. SAMMY WATKINS” with nearly 10 million views.

Since launching his channel, he’s collaborated with numerous YouTubers, including Logan Paul, CashNasty and Flight. His channel currently has nearly four million subscribers, with over 600,000 followers.

A versatile individual, Deestroying also dipped his toes into music, releasing several music videos and tracks. In 2018 he collaborated with the rapper King Troy on the single “Paper Route”, followed by other soundtracks, including “Cocaine”, “Cupid”, and “Horns on My Tesla”.

While on YouTube, Deestroying made numerous videos in which he advocated for a National Football League (NFL) team to sign him, and in May 2019 his wish was almost granted – he signed a deal with the Toronto Argonauts of the Canadian Football League. Subsequently, Deestroying featured in pre-season games and was signed to the practice roster to begin the season. However, due to allowed limits on American players on roster practice, Deestroying was put on the suspended list.

He arranged a deal designed to give him more time for making YouTube videos, and decrease his obligations to the team, which was financially driven, as Deestroying generates more money on YouTube compared to being on the practice squad. In 2021 he posted the video entitled “I GOT INVITED TO TRAIN FOR THE NFL COMBINE (NFL COACHES GIVE ME ADVICE)”. Even though the NFL Combine 2021was canceled, he was invited to the House of Athletes Scouting Combine Showcase.

In February 2021, he participated in the Kohls Pro Combine kick-off competition, and won.

Regarding his dating history, he dated fellow YouTuber and model Kiana Wudte, whom he met at the University of Central Florida. The then-couple dated for a couple of years, and Kiana was often featured in Deestroying’s videos.

However, by the end of 2020,they’d broken-up, and Kiana explained the situation in the video entitled “The Truth”, elaborating her high expectations for the relationship, but Deestroying’s infidelity. She said: “I think that we had two different views on life. I wanted to get married, have kids, and have a life together. I had a lot of plans for us, and unfortunately, I don’t think he had those for us. He wants to be young, see the world, and that is fine.“

Since August 2021, Deestroying has been dating Lauren Fitzmaurice, the basketball player and athlete, introducing her to his fan base in the video “MEET MY NEW GIRLFRIEND”. Lauren is also a social media star, with over 100,000 followers on Instagram. Since they began dating, they’ve created several videos on Deestroying’s channel, including “The Female Deestroying” and “Out First Time Doing This”:

In February 2020, Deestroying posted a video in which he disclosed that the American Football wide receiver, Antonio Brown, was suing him for copyright infringement, and called him out for using his name in a YouTube video. In 2019, the YouTuber and receiver collaborated, and made a video about football drills.

However, according to Deestroying, the real reason Antonio went off on him was due to one of his videos in which he talked about him, showing his genuine concern after Antonio was arrested for burglary and criminal mischief. Reportedly, Antonio was frustrated with the video and decided to rant on his Instagram live, threatening Deestroying with a lawsuit. Deestroying seemed unbothered by the threats, and even made fun of Antonio, calling him Clown instead of Brown. Even though Antonio looked very determined to sue the YouTuber, he never actually went through with it.

In addition to YouTube, Deestroying is very popular on other social media, such as Instagram and TikTok. His Instagram counts 1.5 million followers, while his TikTok has nearly three million followers with nearly 60 million likes. He is also active on Twitter, on which he has over 70,000 followers.

As of 2021, his estimated net worth is around $2.2 million, acquired largely through his YouTube career. Additionally, he earns through brand deals and affiliated posts on his other social media.

A year difference in my photo quality

Deestroying is 5ft 10ins tall (178cm) and weighs around 170lbs (78kgs). His hair is black, while his eyes are brown. As an individual who has spent most of his life participating in sports and other physical activities, he has a very fit and muscular body. Additionally, he is very devoted to maintaining his current physique, and has several training sessions at the gym every week, and maintains a controlled calorie intake.

Regarding his hobbies, he likes to travel especially to Europe, and has visited France, Germany and England.

In his free time, he watches movies with his girlfriend; his favorite actor is Leonardo DiCaprio, and his favorite actress is Julia Roberts. His all-time favorite movies include “Lost In Translation”, “How to Train Your Dragon”, and “Sleepless in Seattle”.