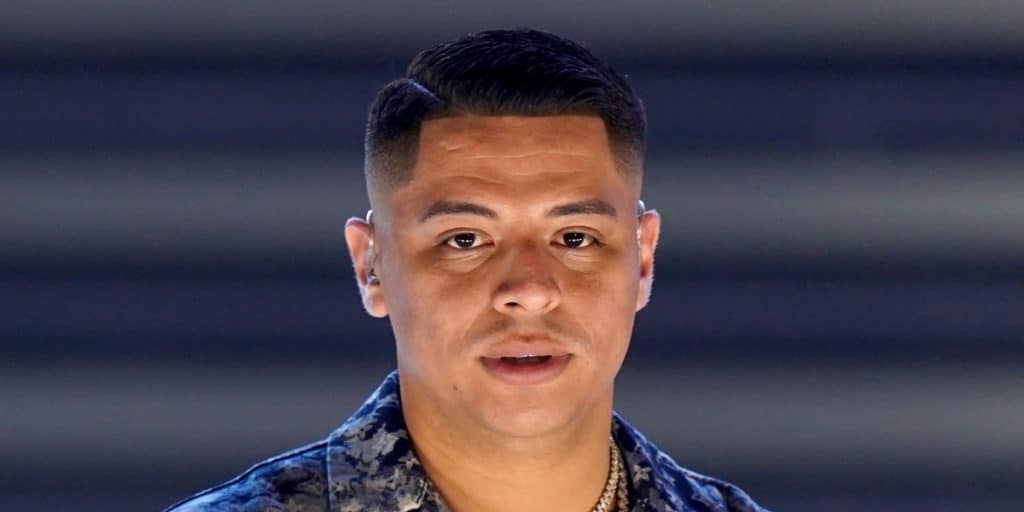 Who is Eduin Caz?

Eduin Oswaldo Parra Cázares was born on 30 July 1994 under the zodiac sign of Leo, in Culiacán, Sinaloa, Mexico. He is a 27-year-old singer and musician, probably best recognized for being the lead singer of the famous Mexican band Grupo Firme, and for releasing such popular singles as “Yo Ya No Vuelvo Contigo”, “El Tóxico”, and “El Amor No Fue Pa’ Mi”.

How rich is he, as of now? Eduin Caz Net Worth

As of late-2021, Eduin Caz’s net worth is estimated at over $20 million; earned through his successful contribution to the music industry.

He has released numerous studio albums and singles with his band, since his career started in 2014.

Eduin Caz spent his early years in his hometown of Culiacán, where he was raised by his father, whose name is unknown, and his mother, Lorena Cázares; however, the professions of her parents aren’t disclosed. His parents later divorced and his mother remarried. He has an elder brother, Johnny Caz, who is also a singer and member of Grupo Firme.

He holds Mexican nationality, belongs to Hispanic ethnic group, and is a Christian. Eduin hasn’t shared any details about his educational background, except that he studied Marketing.

Eduin Caz developed his love for music at a very young age – he began singing and performing in public transport while in high school. Upon matriculation, he moved to Tijuana to pursue his career further. He then met Joaquín Ruiz, who would later become a guitarist of Grupo Firme, and the guys performed together in a band called Reto Sierreño.

In 2014, Eduin Caz co-formed the band called Fuerza Oculta, alongside Joaquín Ruiz and three more friends, starting by doing covers and performing in local clubs and events. Once they started being noticed, the group changed its name to Grupo Fuerza; however, at the time there were a number of groups with similar names, so they eventually settled on Grupo Firme, and named Eduin as their frontman.

They soon started making their own music, and signed a contract with Music VIP Entertainment. Their debut studio album, entitled “Pasado, Presente, Futuro”, was released in April 2017. Later that year, the guys issued their second studio album, “El Barco”, with such songs as “Gente De Verdad”, “El Bueno De Tijuana”, and “Las Metas”. Their first major success came in the next year with their single “Tu Postura”, which was followed by other hit singles such as “Pídeme”, “El Roto” and “Juro Por Dios”, all of which were distributed in 2018.

During the same year, they recorded a live album entitled “En Vivo Desde Desde Medellín Colombia”, in conjunction with holding a concert in Colombia.

It was followed up by hit singles such as “Me Canse De Amarte”, “El Mundo A Tus Pies”, “El Amor No Fue Para Mi” – for which they received a nomination for Premios Juventud – and “Me Muero”, to name a few. They also released other live albums, including “Viva México”, “En Vivo Desde Anaheim, California”, and “Nos Divertimos Logrando Lo Imposible”, which earned them both a Premios Juventud award and a Grammy Latinos award.

In 2021, they also won three more awards at Premious Juventud and five awards at Premio Lo Nuestro. The single “Ya Supérame” helped them to enter the Billboard Hot 100 chart in October. Most recently, in December 2021 they teamed up with Maluma, and released the song “Cada Quien”.

Eduin Caz has short dark brown hair and dark brown eyes. He stands at a height of 5ft 7ins (1.75m), while his weight is around 183lbs (83kgs). Information about his vital statistics, biceps size, and shoe size isn’t available.

Eduin Caz is married to his high school sweetheart Daisy Anahy, who’s a social media influencer by profession. The couple became romantically involved in November 2009, and after dating for more than five years, exchanged their wedding vows in January 2015. They have a son named Eduin Gerardo, born on 3 July 2015, while they welcomed their daughter, named Dhasia Geraldine, on 10 August 2020. The family resides in Mexico.

Most recently, rumors surfaced that he’s been unfaithful to his wife for a while, since a woman named Stephanie Hernández revealed in a TikTok video that she didn’t only have an affair with Eduin, but also had a son. She even shared a video in which he reportedly is in a bed with her. Following the scandal, his wife allegedly ended their marriage. However, he denied everything.