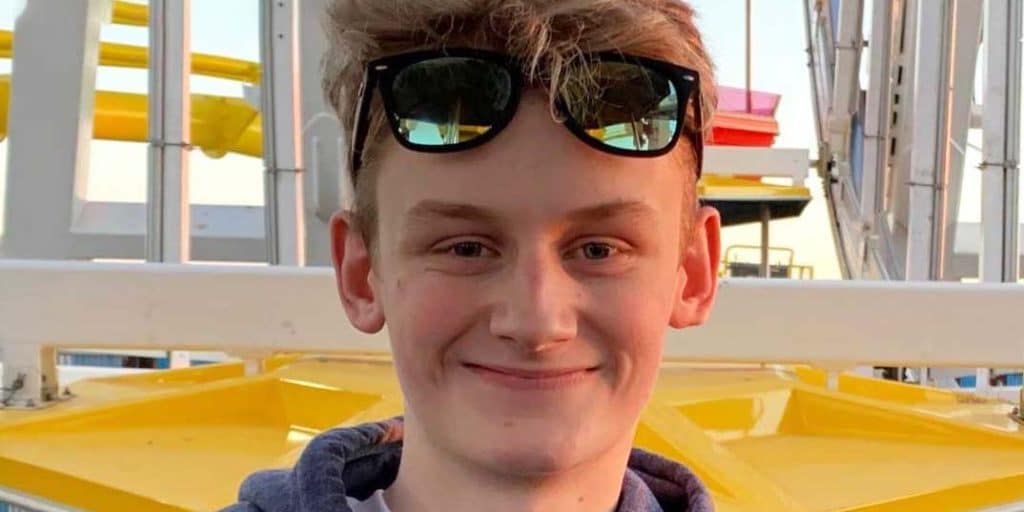 Who is Evan Joseph Asher?

Evan Joseph Asher is the celebrity son of the well-known model, actress, and political activist Jenny McCarthy. Evan was born under the Zodiac sign Taurus on 18 May 2002 in Los Angeles, California, USA. As of 2022, he is 19 years old and holds American nationality. He lives in New York City with his family.

In 2007, his mother, Jenny publicly disclosed that in 2005 at the age of two,Evan was diagnosed with Autism Spectrum Disorder (ASD), after suffering a series of seizures. She also revealed that he was an “indigo child”, which according to the pseudoscientific concept means that he was endowed with special and supernatural abilities. After seeing a doctor, Evan was given the necessary medication, which improved his health and stopped the seizures.

However, the seizures were not to the full extent of his condition, as he also showed signs of impaired speech and mental difficulties. According to the experts, the symptoms that he displayed were more indicative of a disease called Landau-Kleffner syndrome, a rare neurological syndrome that often gets misdiagnosed as autism.

He was then taken to the University of California, Los Angeles (UCLA) Autism Evaluation Clinic at the Neuropsychiatric Hospital, where he was diagnosed with autism. The diagnosis was later confirmed by the Regional Center of the State of California. As he grew up, it was visible that his mental health lagged by a couple of years.

With these hardships, Jenny focused on seeking alternative methods and treatments to improve Evan’s health, which were not scientifically approved. Some of those included chelation therapy, aromatherapies, and hyperbaric oxygen chambers.

Jenny also experimented with various diets, such as gluten-free and casein-free. Regarding her persistence and dedication to curing Evan, she said in an interview: ‘Try everything. Over the course of doing this, it was amazing to watch how certain therapies work for certain kids, and they completely don’t work for others. When something didn’t work for Evan, I didn’t stop. I stopped that treatment, but I didn’t stop.’

At some point, she claimed that his condition was caused by measles/mumps/rubella vaccines, and began advocating for the ban of vaccines, making the headlines and causing a huge commotion. However, her theory, which was based on the information that mercury in vaccines causes autism, was completely rejected by the National Institute of Mental Health. In 2014, she talked to the press about her son’s health, saying: ‘Evan’s amazing. He does not meet the diagnostic characteristics for autism.

He definitely has quirks and issues from the seizures. He has a little bit of brain damage due to his seizures. He doesn’t qualify for any more services, but he does have issues in his school.’ Besides advocating for alternative ailments, she wrote three books on the subject of parenting and raising a child with autism.

Evan was born into a family rooted in the entertainment business as his father, John Mallory Asher, is an actor, director and screenwriter, perhaps best known for his projects “A Boy Called Po”, “Dirty Love”, and “Token”. His parents initially met in 1998, and after a year of dating, they married in 1999. Reportedly, from the start their marriage was on the rocks, and in 2005 they divorced.

Despite his condition, over the years, Evan has shown great improvement in mental, physical health, social abilities, and speech, as he was able to deliver a small toast at his mother’s subsequent wedding to Donnie Walhberg.

Regarding his education, he matriculated from the St. Charles East High School in May 2021.

Evan has two step-siblings, Xavier Wahlberg and Elijah Wahlberg, from his mother’s marriage to the actor, singer, and producer Donnie Wahlberg, perhaps best known for his roles in “Blue Boys”, “Boomtown”, and “Saw II”.

According to his Instagram bio, Evan is a gamer, video editor and drawer. It appears that he wants to become a social media personality and YouTuber, as he launched his self-titled YouTube account in 2018. In his first video, he says: “Hello guys, it’s Evan here, and welcome to my official YouTube channel. I can’t wait to get so many subscribers, which I’m glad, and I hope it is gonna happen. Enjoy my videos”.

In 2019, he launched the mini YouTube series, consisting of four episodes entitled ”Evan Dog’s Adoption Show”, which features Evan at the Anderson Animal shelter, presenting the available dogs for adoption.

During the same year, he posted the video “Updates”, in which he explained that he planned to center his channel on games and holiday videos. Evan plays video games such as “Minecraft” and “The Hunt”. At the moment, his channel has over 2,000 subscribers with a total of 36,000 views of his 12 videos.

Additionally, Evan appeared numerous times in the reality show entitled “Donnie Loves Jenny”, which follows the lives of his family, with a focus on Jenny and Donnie. The show ran for one season, after which it was canceled.

Regarding his dating history, not much information is available, but since June 2021, Evan has been dating a girl named Natalie Gallo, often posting photos with her on his Instagram account.

Given his age, it is too early to talk about his net worth.

On the other hand, his mother and stepfather’s combined net worth is estimated at around $25 million. His father’s wealth is around $3 million, which he earned through his career in the entertainment industry.

The information about his height and weight is unavailable. Evan has blonde hair, a fair complexion, and grey eyes.

He likes to watch movies, play video games, and spend time with friends and his girlfriend.

For his 19th birthday, his mother gifted him his first car, and he proudly shared the moment on Instagram.

In 2016, his father, John directed the movie entitled “The Boy Named Po”, which was based on his relationship and experience raising a child with autism. The film follows a widowed engineer who tries to navigate life and the hardships of taking care of a such a child.

Jenny McCarthy Wahlberg, an Illinois native, started her career in 1993 posing as a nude model for the October issue of Playboy, and was later awarded the title “Playmate of the Year”. Jenny was picked out of 10,000 applicants due to her “girl-next-door” appearance and her religious background, as she was raised in the spirit of Catholicism. However, the taste of success was bitter-sweet for Jenny and her family, as they stumbled upon a lot of criticism and negativity for her nude photos.

In 1996 she made her debut as an actress, landing a small role in the comedy movie “The Stupids”. Confident in her skills and charisma, she launched “The Jenny McCarthy Show”, which proved to be very successful, so soon after launched another show entitled “Jenny”.

In the following period, she landed several roles in popular movies such as “Scream 3”, “Scary Movie 3 “, and “Diamonds”.

Jenny also tried her luck as a writer and director, working with her then-husband John Asher, on the movie “Dirty Love”, but earning only the Razzie Award for Worst Actress, Worst Screen Play, and Worst Picture”.

During her lengthy career, she also made numerous guest appearances in series such as “Two and a Half Men”, “Charmed”, and “The Drew Carey Show”. Despite her obligations and busy schedule, she resumed her association with the “Playboy” magazine, appearing on the covers and in other capacities.

Jenny has hosted ABC’s “Dick Clark’s New Year’s Rockin Eve” since 2010, and broke the tradition in 2020 when she refused to participate. She is also known as a co-host of the talk show” The View” and as the panelist of the popular competition show “The Masked Singer”.