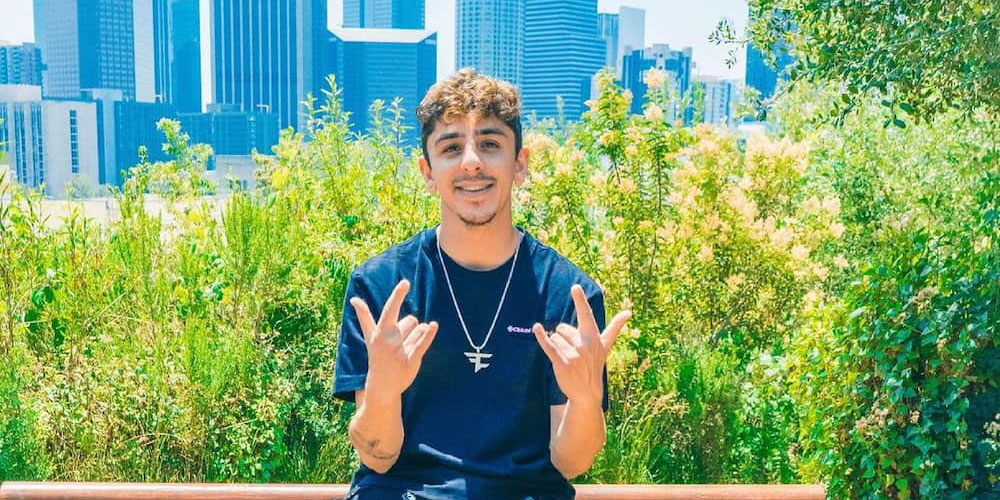 FaZe Rug is an American YouTuber, social media personality and business man, best known for his gaming content and pranks on the video-based platform. Keep reading to learn all about the famous YouTube sensation.

Brian ‘FaZe Rug’ Rafat Awadis was born on 19 November 1996 under the star sign of Scorpio, in San Diego, California USA.  His parents are Chaldean Catholic immigrants from Iraq, who settled in America for a better life. Thus, Brian is of Chaldean descent, but holds American nationality.

When Brian’s parents moved to the US, his father bought two liquor stores which he ran for years. Brian’s older brother, Brandon Awadis is also a YouTuber and social media personality.

Brain Awadis attended San Diego Miramar College, then dropped out after his freshman year to focus on YouTube and gaming. His parents were initially against the idea but after seeing his first five-figure paycheck (worth $11,000) from YouTube, they were convinced that YouTubing was indeed an actual career.

On 11 October 2008, Brian and his brother Brandon teamed up to create the YouTube channel called FatherSonChaldean, however, they posted hardly any content on the channel. From the creation of the channel, ‘til 2009 when it became inactive, they only uploaded four videos, but FatherSonChaldean currently has 70,500 subscribers.

Brian Awadis created his own YouTube channel under the name of RugRat on 12 July 2012. His first video was uploaded a few days later – “Welcome to my Channel- By Squeak” – which attracted over 700,000 views. Subsequently, he focused on sharing gaming content, such as “RugRat Funnies and Fails! FaZe Rug”, “1st Shot in Era”, and “Invisible Gun Hitmarker”, all uploaded in 2012.

As his audience grew overtime, he started to transition, diversifying his content and incorporating clips from his daily life onto his channel. Faze Rug first revealed himself on 31 December 2013, in a video thanking his fans for getting him to 150,000 subscribers.

As a matter of fact, Brian uploaded his first vlog “Rug @ Being Active? VLOG ft. Bosley” in January 2014, and went on to create many others.

In recent times, Rug has focused more on creating content around his fans, pranking them, but also making some of their dreams come true. Some which attest to this fact are “A Fan was Really Sad, So I Surprised Him With This”, “A Fan Wanted to Hangout, So I Built His Dream Gaming Setup” and “Giving My Credit Card to My Biggest Hater”, all uploaded in the last quarter of 2021.

Faze Rug’s YouTube channel currently has over 20 million subscribers, and over 51 billion views in total.

Aside from his main channel, Faze Rug has another YouTube channel called Faze Rug Games, solely dedicated to gaming. The channel only has 12 videos, but still almost 850,000 subscribers.

Brian Awadis saw his dream become a reality when he was recruited into FaZe Clan, a popular esports team on 26 November 2012, which initially was just a group of friends who enjoyed gaming and had to post clips, it wasn’t a business organization. It was around 2017 that the team started to look at business expansion and began giving shares to the big members of the Clan, Bran and seven others.

He now co-owns FaZe Clan with 84 other people, such as Offset (the rapper), basketball player Ben Simmons, music mogul Jimmy Iovine and so much more.

In 2020, FaZe Clan was worth $240 million, and was listed on Forbes as one of the most valuable esports companies.

Faze Rug made his acting debut in “Crimson”, a 2020 horror film produced by Faze Clan and directed by Gregory Plotkin. Brian mentioned in an interview that watching how the professionals worked behind-the-scenes of “Crimson” motivated him to apply the same level of professionalism to his own YouTube channel. He said, ‘after a few days on set I went to the equipment store and spent like $7,000 on equipment.’

Brian Awadis has a close relationship with his mother, who once described him as ’smart, loving and handsome’. Brain also retired his father from active employment by giving him a $100,000 check; his father sold off one of his liquor stores and retained the other one.

On the Tom Ward Show, Brian admitted that he was a socially awkward teenager, but YouTube helped him become more outgoing. Brian started dating Kaelyn Wilkins in 2016, but they only went public with their relationship a few years later. They broke up in April 2021, because things just weren’t working out. He also dated YouTuber Molly Eskam briefly, but they broke up as well.

Brian still lives with his parents and dog, Bosley in San Diego.

In late 2021, FaZe Rug has an estimated net worth of $10 million which he’s earned from YouTube, sponsored posts, FaZe Clan and various personal projects. He owns a 2016 Range Rover Autobiography, and a Lamborghini Huracan, which he customized in 2017.