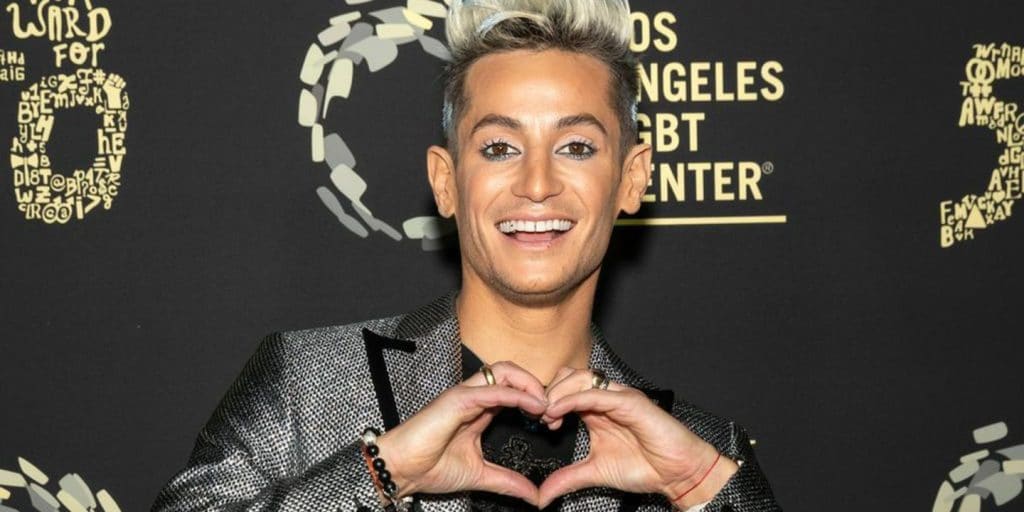 Who is Frankie Grande?

Frank James Michael ‘Frankie’ Grande Marchione was born in New York City, USA, on 24 January 1983 – his zodiac sign is Aquarius, and he holds American nationality. He’s an actor, dancer, TV show host, and a YouTuber, who’s probably known best for his self-titled YouTube channel, which he launched on 2 October 2012; it’s today subscribed to by close to 500,000 people, and numbers over 30 million likes of all his videos combined. Frankie is mostly focused on uploading videos which feature him during his everyday life.

He’s also known for being the older half-brother of the famous American singer-songwriter and actress Ariana Grande, and his half-brother is James Marchione.

Frankie was raised in Englewood in New Jersey, as his family moved there after he was born.

His parents are Joan Grande, who’s the CEO of the alarm and telephone system company Hose-McCann Communications, and Victor Marchione who was a physician.

At the age of 10, Frankie moved to Boca Raton, Florida with his mother, and in 1997 enrolled at Pine Crest School; he was mostly interested in acting and singing during his four years there, and appeared in various school musicals.

Upon matriculating in 2001, he enrolled at Muhlenberg College, graduating with a Bachelor of Arts degree in 2005, having majored in dance, theatre and biology.

Frankie then wanted to become a doctor, however, he actually went for a career as an actor.

Frankie is mostly popular on YouTube for the music videos which he’s uploaded, especially those which feature him singing with his half-sister Ariana. We’re going to mention his three most watched videos, which have helped him attract many subscribers.

Frankie’s #1 video “Frankie Grande ft. Ariana Grande – Seasons of Love” has been watched close to three million times since 13 December 2018, and features Frankie and Ariana singing the song “Season of Love” from the Broadway show “RENT”.

His second most popular video “How to Whistle Tone!!!! With Frankie & Ariana Grande” has been watched more than two million times since 21 January 2013, and shows Frankie and Ariana singing and screaming in the streets.

Third on his popularity list is “Goin’ Grande in DISNEYLAND!!”, viewed over two million times since 22 December 2012, and shows him travelling to Disneyland with Ariana.

Frankie made his debut film appearance in his half-sister’s 2013 music video “Ariana Grande Feat. Big Sean: Right There”. Two years later, he starred in the short musical “Beauty and the Beat Boots”.

He played The Flamingo in the 2017 action comedy “The Revengers”, and then starred in his own 2018 music video “Frankie Grande ft. Ariana Grande: Seasons of Love”. In 2020, Frankie portrayed Richard Venti in the popular crime comedy drama “Spree”, written and directed by Eugene Kotlyarenko, and which starred Joe Keery, Sasheer Zamata and David Arquette. The movie follows the rideshare driver Kurt Kunkle, who has come up with a horrible way to go viral on the internet; it was nominated for five awards.

Three of Frankie’s most recent roles in movies have been in the 2020 short fantasy “Immortal”, the musical “Rocky Horror Show: Livestream Theater” both in 2020,  and the 2021 comedy “Titanique: The Maiden Voyage Concert”; he’s currently shooting for the upcoming horror thriller comedy “Summoning Sylvia”.

Frankie made his debut TV series appearance in the 2017 episode “Broadway or Buts” of the family comedy drama “Haters Back Off!”, while he was then invited to make a guest appearance in an episode of various series’, including the comedy mini-series “Love Your Life” and the comedy “Firework Live”.

Between 2017 and 2019, he portrayed Frankini in the popular action family comedy “Henry Danger”, created by Dana Olsen and Dan Schneider, and which starred Jace Norman, Cooper Barnes and Riele Downs. The series follows the 13-year-old Henry Hart who’s working as Captain Man’s sidekick; it aired from 2014 to 2020, and won 18 of the 39 awards for which it was nominated, including a Primetime Emmy nomination.

He’s also known for his portrayal of Tyler in the comedy “Indoor Boys”. It stars Alex Wyse, Wesley Taylor and Michael Tacconi, which follows two gays who are spending all of their time in their apartment; it’s been airing since 2017, and has won 15 of the 39 awards for which it’s been nominated.

Three of Frankie’s most recent roles in TV series have been in a 2020 episode of the musical family comedy “All That”, three episodes of the comedy “Danger Force” in 2020, and the 2021 episode “Video Game Frankini Dance Off!” of the adventure drama “Danger Goes Digital”.

In 2014, Frankie was one of the 16 people who competed in the reality game-show “Big Brother”, spending 12 weeks in the Big Brother house, and placing fifth.

MTV network stated that Frankie’s presence in the house was controversial, but it also had its impressive moments.

He could’ve been seen featured in the 2019 documentary series “E! True Hollywood Story”, the 2019 TV special “88th Annual Hollywood Christmas Parade”, and the 2020 TV special “Love in Action: A Telethon to Support the LGBTQ Community During Covid-19”.

Frankie has made a guest appearance in a number of talk-shows, most recently in “Celebrity Page”, “Steve Varley Show” and “Stars in the House”.

He was also nominated for a 2016 People’s Choice Award for Favorite Social Media Star.

Frankie is openly gay, and often speaks about his love life in his YouTube videos. In 2019, he started dating Hale Leon, an American actor with three credits to his name: Hale has appeared in the 2016 short comedy film “The Gay Police”, the 2017 short comedy drama movie “Sweet and Sour” and the 2018 short comedy film “My Piano Lesson”.

In June 2021, Frankie announced on his social media accounts that he’d become engaged to Hale; they haven’t spoken of the date of their wedding, but most of Frankie’s fans believe that it has been planned for July 2022.

Frankie dated a couple of men prior to meeting Hale – the actor Tayte Hanson in 2017, the social media star Mike Pophis in 2018, and the actor Daniel Sinasohn also in 2018.

As of December 2021, Frankie is engaged to Hale Leon, hasn’t married and doesn’t have children.

Frankie loves to put on a costume and attend costume parties, which is why Halloween is his favorite time of the year.

He’s a philanthropist, and in 2007 he co-founded the non-profit organization Broadway in South Africa; Frankie spent the following six years often travelling to South Africa, where he taught performance arts to underprivileged children. In 2013, his organization was merged with another non-profit called buildOn, and Frankie has helped them build two schools in Malawi, for which the organization honored him with their Global Impact Award. He has also helped gather money for AIDS/LifeCycle, which aims to help people fight HIV and AIDS.

Frankie loves to travel, and has been all around the world for both work and pleasure; his dream travel destination is Paris in France.

He enjoys watching movies late at night – his favorite actors and actresses are Brad Pitt, Matt Damon and Kristen Stewart, while a couple of his favorite films include “The Curious Case of Benjamin Button”, “Meet Joe Black” and “Good Will Hunting”.