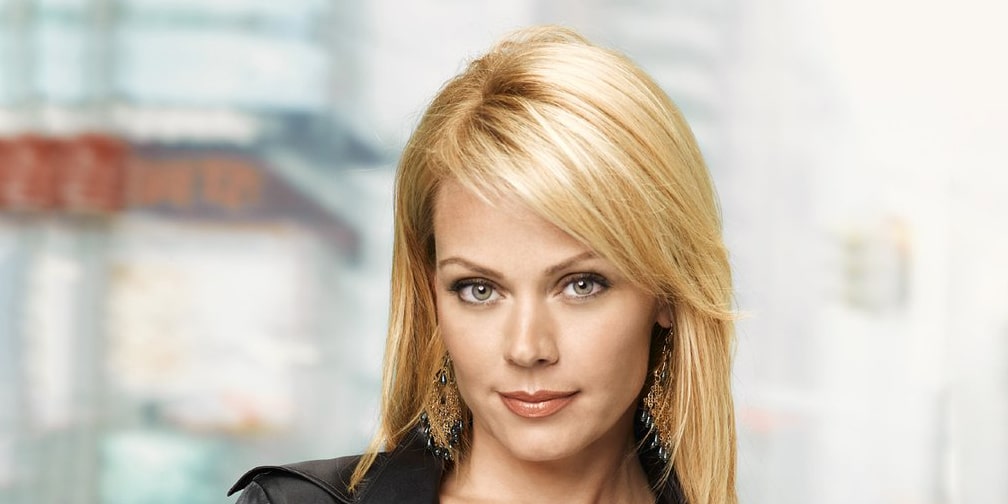 Who is Gail O’Grady?

Gail O’Grady was born under the zodiac sign of Aquarius on 23 January 1963, in Detroit, Michigan USA; she holds American nationality, and her ethnicity is White. She is an actress with 105 credits to her name, perhaps known best for her role as Donna Abandando, in the series “NYPD Blue”, a crime mystery drama about detectives in the New York Police Department who are investigating homicides; the series had 203 award nominations and won 88 awards, including 20 Primetime Emmys.

Although Gail was born in Detroit, she was raised in Wheaton, Illinois by her parents; her father Jim was a financial planner, and her mother Jan O’Grady was a housewife. Gail had a brother Michael, who died in 2004.

She attended Wheaton North High School, and upon matriculating in 1981, she didn’t enroll at college, but instead launched her modeling career, first appearing in a few commercials, and then in 1986, she moved to Los Angeles, California to try her luck. She worked as a model for Montgomery Ward, a leading department store chain in that time.

Gail made her acting debut in the series “Werewolf” in 1987, in which she played one of the victims, followed by her minor roles in the series “In the Heat of the Night”, “China Beach”, “Superboy”, and “Cheers”.

For almost a decade she made appearances as a guest star in several series, such as “Matlock” in which she played Julia McCullough, and in the series “Murder, She Wrote” Gail was cast to play Robin Dishman.

She also appeared in an episode or two of the series’ “Time Trax”, “Designing Women”, “Silk Stalkings”, “Burke’s Law”, and “Promised Land”.

In 1993, she portrayed Donna Abandando in 58 episodes of the series “NYPD Blue”, one of her most significant roles, and for her performance in the series she was nominated for three Primetime Emmy Awards for Outstanding Supporting Actress in a Drama Series.

In 2002, she was cast to play Helen Pryor in the series “American Dreams”, an historical family drama which had 27 award nominations, and won 10 awards including two Primetime Emmys; this was followed by her roles in the series’ “Hot Properties”, “Two and a Half Men”, “Hidden Palms”, “Monk”, and “CSI: Crime Scene Investigation”.

In the series “Boston Legal”, she was cast to play Judge Gloria Weldon; this comedy crime drama had 67 award nominations, and won 16 awards, including five Primetime Emmys. After this, Gail had support roles in several series, such as “Cane”, “The Mentalist”, and “CSI: Miami”. She also portrayed the character Anne Schilling in the series “Desperate Housewives”, which had 189 award nominations and won 66, including seven Primetime Emmys.

In the following years, Gail played supporting characters in several series, before she was cast to play Wanda Perkins in the series “Hellcats”, and she then made an appearance in a couple of popular series, such as “Memphis Beat”, “Necessary Roughness”, “Hawaii Five-O”, “Castle”, and “Rules of Engagement”.

In the series “Revenge”, she portrayed Stevie Grayson, acting alongside Emily VanCamp, Gabriel Mann and Madeleine Stowe, followed by her portrayal of Krystall Richards in the series “Criminal Minds” in 2020, which has been her most recent role in a TV series.

Gail made her big screen debut in the 1988 movie “She’s Having a Baby”, in which she portrayed Laura, acting alongside Kevin Bacon, Alec Baldwin and Elizabeth McGovern in this romantic comedy drama, written and directed by John Hughes. In the following years, she made an appearance in movies such as “Blackout”, “Spellcaster” and “Nobody’s Perfect”, and had supporting roles in the TV movies “People Like Us”, “Parker Kane”, “The Hit Man”, and in the movie “She Stood Alone: The Tailhook Scandal”, she starred alongside Cameron Bancroft and Bess Armstrong.

She also starred in the 1995 movie “Nothing Lasts Forever”, in which she was cast to play Dr. Paige Taylor, alongside Vanessa Williams and Brooke Shields, followed by her supporting roles in the movies “The Three Lives of Karen”, “Every 9 Seconds”, “Two of Hearts”, and “Hope Ranch”.

In the following years Gail appeared in several TV movies, such as “After the Fall”, “Shadow on the Mesa”, “Sins of the Preacher”, Love on Ice”, and “Identity Theft of a Cheerleader” in 2019, which has been her most recent movie role.

Fans of Gail are happy to hear that there are two movies which will feature Gail, the comedy “The Baby Pact” and the thriller “Deadly Draw”, which are in post-production, and should be released in 2022.

Besides modeling and acting, Gail showed an interest in producing; in 2004, she was the producer of the movie “Tricks”, in which she also starred alongside Erika Alexander and Stephanie Romanov, in this drama about three girls who have become prostitutes.

Gail is more or less open when it comes to her love life – it’s widely known that she has been married six times, mostly for very short periods.

Her first husband was her high school sweetheart Richard Dasko; they married in 1981, but divorced two years later.

In 1990, she married Jeffrey Byron, an American actor from Santa Monica, California, however, this marriage lasted only a year, and soon after the divorce, Gail married Severin Wunderman, who is the owner of a company which has acquired the license to distribute and manufacture Gucci and Fila sports watches; however, this love story also ended after a year. In 1995, Gail worked with Steven Fenton, a writer and producer of her TV show “The Gail O’Grady Project”, and they started dating; the two married in the same year, however, because of some misunderstandings between them, they divorced in 1996.

In 1998, Gail married Anthony J Pellegrino, whose occupation is unknown, however, this marriage lasted for two years, as they divorced in 2000.

Interestingly, immediately before her next marriage, Gail gave birth to her son Michael Colton O’Grady on 22 May 2004; his father is her ex-boyfriend Chris Byers. In early 2004, Gail met John Stamatakis, an actor known best for his roles in the movies “Circle” and “Windfall”; they married after a couple of months on 4 June 2004, and this love story lasted until 2008.

As of October 2021, Gail seems to still be dating her long-term boyfriend Josef Shamir; they’ve been together since April 2009, much longer than any of her marriages.

Gail’s favorite hobby is collecting perfume bottles, however, she hasn’t revealed how many she has in her collection. In her spare time she likes to read, and one of her favorite writers is Virginia Woolf. In an interview, she has talked about her love for reading, and said that when she was younger, she worked as a librarian, but was fired because she was messy.

It seems that Gail hasn’t had plastic surgery; she once stated in one of her interviews that if she had needed it, she would have gone ahead, but didn’t specify what surgery that might mean.

As of October 2021, her net worth has been estimated at over $3 million, accumulated largely from her involvement in the entertainment industry over more than three decades; divorce settlements haven’t been made public.