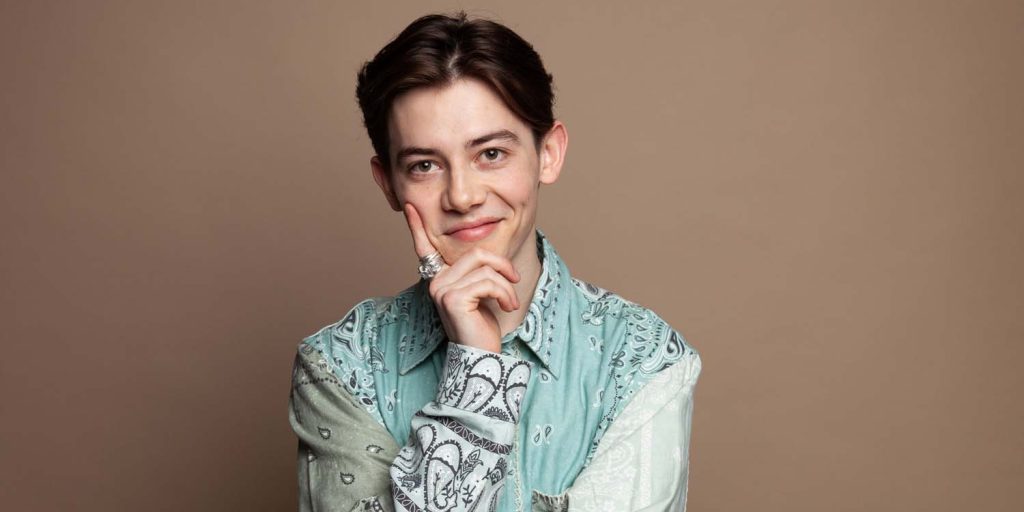 Who is Griffin Gluck?

Griffin Alexander Gluck is an actor, perhaps best known for his recurring roles in popular series such as “Red Band Society”, “Private Practice”, and “Locke & Key”. He’s also made notable appearances in movies such as “Tall Girl”, “Just Go With It”, and “Big Time Adolescence”. Griffin was born under the Zodiac sign Virgo on 24 August 2000, in Los Angeles, California, USA, of mixed Japanese-American descent. As of 2021, he’s 21 years old and holds American nationality.

As an individual born into a family deeply rooted in the entertainment business, it seemed that Griffin was destined for an acting career.

His mother, Karen Gluck works as a production assistant and line producer, and his father, Cellin Gluck is a film director and assistant director/production manager, best known for his projects such as “Persona Non-Grata”, “Lorelei” and “Godzilla”.

Griffin’s father was born in Japan to parents of mixed Japanese American descent. Griffin has an older sister, Caroline Paris Glock, who is also an actress, and has appeared in several short films such as “Through the Lens”, “Still”, and “Time Out”.

Talking of his education, from a young age, he juggled education and his acting career, eventually matriculating from Oak Park High school. According to reports, he is attending the University of Southern California.

Griffin kicked off his career at the age of six, portraying the lead role in a children’s showcase of the musical “Guys & Dolls” at Palisades Playhouse. Having developed an interest in performing, in 2009 he appeared in the Japanese drama film “Sideways”, directed by his father, followed by a minor role in the popular series “The Office”.

In 2011 he landed his breakthrough role as Michael in the romantic comedy movie “Just Go with It”, sharing the stage with Adam Sandler and Jennifer Anniston. In addition to social recognition, his convincing portrayal garnered him his first nomination, for the Young Artist Award in the category Best Performance in a Feature Film – Supporting Young Actor.

During the same year, he was cast as Monty in the comedy-drama series “The United States of Tara”, starring in three episodes. Additionally, he landed one of his most notable roles, starring as Mason Warner in the medical drama series “Private Practice” in the fifth and sixth seasons.

In 2013, he portrayed Phillip in the comedy/drama movie “Trust Me”, opposite Clark Gregg and Allison Janney, and during the same year, he was cast as the main character, Danny Gannon, opposite Maggie Lawson in the short-lived sitcom entitled “Back in the Game”.

After making a one-episode appearance in “Silicon Valley”, he starred as Zeke Morgan in the comedy/drama movie “Just Before I Go”, and then landed the main role in the teen/comedy series “Red Band Society”, which suffered the same fate as his previous sitcom, and was canceled after 10 episodes.

In 2015 he did a handful of TV shows and movies, such as “Batman vs. Robin”, “Larry Gaye: Renegade Male Flight Attendant” and “Life in Pieces”. He also starred as Clay in three episodes of the sitcom “About a Boy”, and appeared in “All Hallows’ Eve 2”.

The following year, he portrayed the titular character in the family comedy film “Middle School: The Worst Years of My Life” and appeared in the Christmas comedy film, “Why Him?”

In 2017 he joined the cast of the Netflix mocumentary series “American Vandal”, which ran for two seasons before it was canceled. His other notable credits include movie “The Boxcar Children: Surprise Island”, “Big Time Adolescence”, and “Tall Girl”.

His Latest and Upcoming Roles

In 2020 he landed several roles; he portrayed Kevin in the coming of age comedy film “Dinner in America” opposite Kyle Gallagher. After making a one-episode appearance in the comedy streaming series “Love Life”, he landed the recurring role as Gabe in the popular supernatural horror series “Locke & Key”, which has run for two seasons garnering success and popularity, while the third season is set to premiere in late October 2022.

Griffin gained substantial popularity and media attention following his performance in the comedy movie “Big Time Adolescence” alongside the “Saturday Night Live” (SNL) comedian Pete Davidson. The film which was released in 2020 on the streaming platform Hulu, scooped generally favorable reviews, while many critics praised Griffin’s individual performance. In an interview, he talked about his experience working with Pete, saying: ”I learned a lot of comedic skills off him, how to play naturally and be funny. I don’t think he necessarily taught me those things more than I observed them, because I thought he was really funny.”

Griffin also portrayed the recurring character, Aaron, in the comedy series “The Real Bros of Simi Valley”, starring in the third season. In 2021 he shared the stage with Vince Vaughn and Miranda Cosgrove in the film “North Hollywood”.

When it comes to his upcoming roles, he’s set to reprise his role as Jack Dunkleman in the sequel “Tall Girl 2”, opposite Ava Michelle and Sabrina Carpenter.

In 2019, he dated the popular actress and singer Sabrina Carpenter. However, the following year they called it quits for unknown reasons. He hasn’t been linked to anyone since, so it’s believed that he’s currently single.

As of 2021, his estimated net worth is already around $1 million, acquired through his career which began 15 years ago at the age of six.

He enjoys photography, swimming, and traveling.

Griffin is an avid animal lover; he has two dogs and a squirrel.