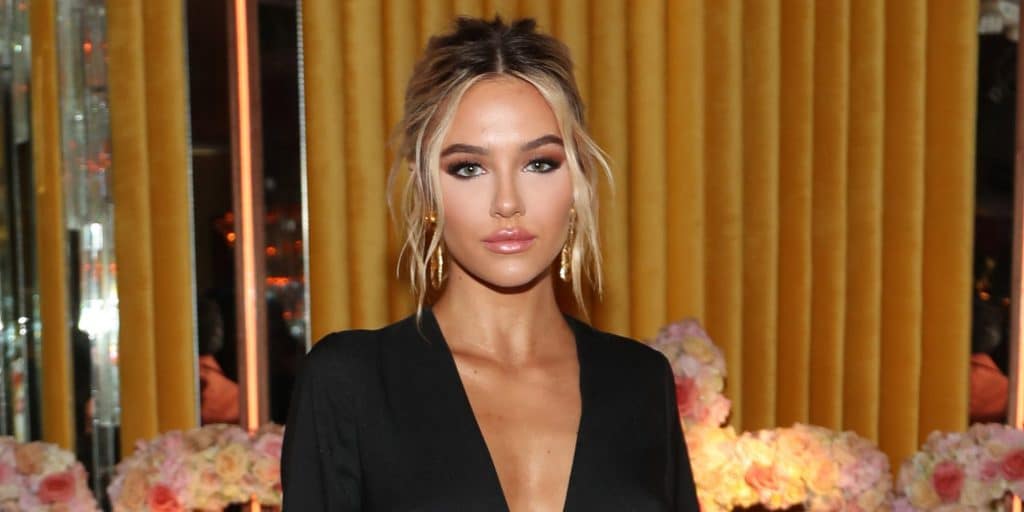 Delilah Belle Hamlin is an American model, but probably best known as Harry Hamlin’s daughter. Keep reading to find out the interesting details concerning her career and personal life.

Delilah Belle Hamlin was born on 10 June 1998 under the zodiac sign of Gemini, in Los Angeles, California USA. She has traces of Portuguese, German and Scottish ancestry, and holds American nationality. Delilah grew up partly in the spotlight; her mother Lisa Rinna is an actress and TV personality, while her father Harry is an actor and entrepreneur.

Delilah was raised in Beverly Hills, with her sister Amelia Gray and an older half-brother Dimitri Hamlin. She attended Halstrom Academy, California where she had two hours of study sessions per day. She enrolled into New York University in 2018, majoring in Psychology.

Delilah Hamlin made her television debut in 2010, in the comedy club episode “Harry Loves Lisa”, co-starring with her parents. She has also appeared in”The Real Housewives of Beverly Hills” and “Access Hollywood”.

According to Delilah, she didn’t set out to be a model, but her social media feed attracted the attention of one of the best modeling agencies, and by August 2016 she was signed to Elite Model Management. Delilah made her fashion catwalk debut at the Tommy Hilfiger show, then  in 2017, the model made her Milan Fashion Week debut in the Dolce & Gabbana show, which was attended by many celebrities.

However, Delilah prefers magazine shoots to walking the catwalk; in her words, ‘I’ve only done it a few times, but the runway is a rush! On a shoot, there’s more time to make connections, I love meeting people in the industry.’

Despite her parents’ fame, Ms. Hamlin has shared that she would rather work her way up the ladder. She shared that the best piece of advice her parents ever gave her was ‘stay true to yourself and don’t let the industry change you.’ Gigi Hadid remains her primary influence in the modeling industry.

Due to a combination of her parents’ fame and modeling career, Delilah has over 1.6 million followers on her Instagram page (@delilahbelle).

She’s made sponsored posts for brands such as Pepe Jeans and Baja East, and also has a collaboration with UK fashion brand Boohoo, for social media endorsements.

Delilah Hamlin dated Aidan Reilly in 2014, but they soon broke-up. She started dating “Love Island” star Eyla Booker in May 2019, and the couple are still going strong. Even her mother is in support of their relationship, as she often posts pictures of the couple on her Instagram page.

The model revealed that the pandemic and global lockdown opened her eyes to many possibilities, and she has hinted at interests in singing and fashion design.

Delilah has struggled with physical health issues for a long time. She shared on Instagram that she was diagnosed with PANDAS, encephalitis, Epstein-Barr virus and Lyme disease a few years back.

She started experiencing frequent attacks in early 2021, so saw a psychiatrist who overprescribed her medications, which led to Delilah becoming dependent on Xanax. In an Instagram video she shared, ‘one my body got dependent on Xanax, two I overdosed but I didn’t mean to, at all. I overdosed on this medication called propranolol. I took it with Benadryl and for some reason, I ended up in the hospital.’ Delilah was rushed to the emergency center late in October 2021, and described feeling hopeless and helpless after the incident. She ended the live video by asking fans for recommendations on what specialist to meet.

The Hamlin family also experienced another loss, as Delilah’s maternal grandmother, Lois DeAndrade Rinna passed away on 15 November 2021, after suffering a stroke at the ripe age of 93. Lisa shared the news on social media with the caption, ‘heaven has a new angel.’

Delilah Hamlin is 5ft 7ins (1.71m) tall and weighs around 108lbs (49kgs). She has blonde hair and green eyes. Delilah, as a model, has an ever-changing clothing style. Sometimes she’s dressed in elegant gowns for the red carpet, other times you may find her in designer two-piece suits. She also likes to dress casually in sweatpants and sneakers.

In late 2021, Delilah Belle Hamlin has an estimated net worth of $2 million, while her father is reputedly worth $12 million. Details of property owned by Delilah and her family remain undisclosed.

Who is Harry Hamlin?

Harry Hamlin is an American actor, author and entrepreneur. He was born on 30 October 1951 under the zodiac sign of Scorpio, in Pasadena, California US. His father, Chauncey Jerome Hamlin was an aeronautical engineer, while his mother Bernice was a Californian socialite.

In his teenage years, Harry attended the Flintridge Preparatory School near Pasadena, then moved to The Hill School, a private boarding school located in Pennsylvania, where he was active on the soccer and lacrosse teams, also participating in various school plays.

Hamlin obtained two Bachelor of Arts degrees in Psychology and Drama from Yale University in 1974. Upon graduation, he enrolled at the American Conservatory Theater’s advanced program where he received a Master of Fine Arts degree in 1976.

Harry Hamlin made his film debut in 1978, playing Joey Popchik in Stanley Donen’s “Movie Movie”, a role for which he received a Golden Globe nomination. The following year, he made his television debut as Bill Lonigan in “Studs Lonigan” (1979).

Subsequently, he played Perseus in the 1981 adventure film “Clash of the Titans”, and starred in “Making Love” (1982) as Bart McGuire.

Harry Hamlin made his Broadway debut in 1982, portraying Moe Axelrod in the revival of Clifford Odets’ “Awake and Sing!”.

In 2001, Hamlin starred in “Perfume”, a Michael Rymer-directed film in which actors had to improvise the dialogue. The film featured an ensemble cast, including Leslie Mann, Michelle Williams, Paul Sorvino and Jeff Goldblum.

Harry and his wife, Lisa Rinna had their own reality TV show, “Harry Loves Lisa” in 2010. His role as Jim Cutler in “Mad Men” from 2013 through 2014 earned him a nomination for a Primetime Emmy Award.

"HAPPY NEW YEAR FROM HARRY HAMLIN AND ME LOVE YOU! #cdnye2016 #platinumblonde 💋"(via @lisarinna)

Posted by Real Housewives Fans on Bustle on Monday, January 4, 2016

Hamlin released his first book in 2010, “Full Frontal Nudity: The Making of an Accidental Actor”, which documented his foray into Hollywood, and the entirety of his career.

Harry met Ursula Andress in 1979; she gave birth to their son, Dimitri Hamlin in 1980, and the couple were engaged but never made it to the altar as they broke up in 1983. Then he married actress Laura Johnson in 1985, but they divorced in 1989.

Then he had a year-long marriage to actress Nicollette Sheridan between 1991 and 1992. Hamlin’s third and last marriage is to reality TV star Lisa Rinna, since 1997; they have two daughters, born in 1998 and 2001.