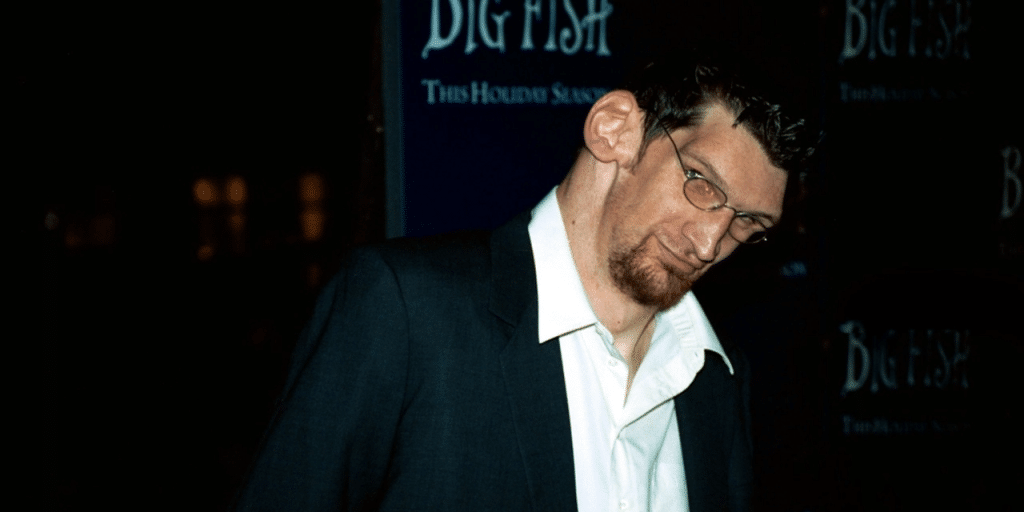 How did Matthew McGrory die? Disease, Height, Wife, Net Worth

Who is Matthew McGrory?

An American who held the Guinness World Record for the tallest actor, Matthew Michael McGrory, was born under the zodiac sign of Taurus on 17 May 1973, in West Chester, Pennsylvania USA. He had over 15 acting credits to his name, and is perhaps known best for his role as Karl the Giant in the 2003 movie “Big Fish”, starring Ewan McGregor, Billy Crudup and Albert Finney; the movie had 69 award nominations, including an Oscar for the Best Music, Original Score – it didn’t win any, but was well accepted by the public.

Matthew was raised in West Chester alongside his three siblings whose names and genders are unknown, by their parents; father William Henry McGrory was an accountant, and mother Maureen Catherine McGrory was a housewife. Matthew was born with a disorder called acromegaly, which results from excess growth hormone after the growth plates have closed – by the age of six, he was already over 5ft (1.5m) tall.

He attended a local high school, and upon matriculating in 1991, he enrolled at Widener University to study pre-law, and he then studied at West Chester University, from which he graduated with a Bachelor’s degree in Criminal Justice in 1995.

In 1996, Matthew was heard in the American radio talk show “The Howard Stern Show” as a member of Wack Pack, which was assembled of the personalities who are unusual in some way, such as having a comical voice, appearance, or ability.

He was also a guest in the “Oprah Winfrey” talk show, before he pursued his acting career.

Matthew made his acting debut in the music video for Marilyn Manson’s song “Coma White”, in 1999, followed by his appearance as Gunt in the horror comedy “The Dead Hate the Living”, in 2000.

In the following year, he made his television debut in the series “Malcolm in the Middle”, portraying Lothar in this comedy drama, which had 118 award nominations, and won 46, including seven Primetime Emmys.

The same year, he was cast to play Human Sasquatch in “Bubble Boy”, a romantic comedy adventure, starring Jake Gyllenhaal, Marley Shelton, and Swoosie Kurtz, and then he had an uncredited role as Tall Alien in the 2002 sequel “Men in Black II”, acting alongside Tommy Lee Jones, Will Smith and Rip Torn.

Because of his appearance and his deep voice, Matthew mostly acted in horror movies, and in one of his interviews he was talking about his voice, saying that his actual voice is the same as that heard in movies, that it isn’t part of his acting.

In Rob Zombie’s horror “House of 1000 Corpses”, Matthew portrayed Tiny Firefly, before he was cast to play his most notable role as Karl the Giant in “Big Fish”, a fantasy comedy drama based on the novel of the same title written by Daniel Wallace. The movie follows the story of a reconciliation between a dying father, Edward, and his son Will – Matthew’s character is a misunderstood giant, who was terrorizing the town and eating livestock from the farms.

One day, Karl the Giant and Edward left the town together, got jobs in the Calloway Circus, and the adventure starts.

In 2004, he portrayed Toto in the action comedy “Planet of the Pitts”, written and directed by Andreas Brandy, followed by his role as Richard Blunderbore in “Big Time”, before he was cast to play Giant in the five-time Primetime Emmy- awarded series “Carnivale”, starring Clancy Brown, Michael J. Anderson and Adrienne Barbeau.

In the horror “Constantine” starring Keanu Reeves, Matthew had an uncredited role as Demon, before he portrayed Tiny in “The Devil’s Rejects” and Hort Willows in “ShadowBox”, in 2005.

The movies “Existence” and “Dark Place” were released after his death, and his last movie “The Evil Within” was released in 2017, Matthew portraying Giant at Overlook Café in this horror starring Sean Patrick Flanery, Frederick Koehler and Dina Meyer, which had three wins – this movie was dedicated to Matthew McGrory’s memory.

There isn’t much known about Matthew’s previous relationships, however, it’s widely known about his relationship with Melissa Davis, with whom he lived in Sherman Oaks, California until his death on 9 August 2005.

Melissa prefers to keep her private life away from the media’s attention, and hasn’t revealed information regarding her occupation and age, nor details of her relationship with Matthew.

Matthew never married or was engaged, and didn’t have children.

At the time of his death, it seems that he was alone at home, and the Los Angeles Police Department found him dead in his residence in Sherman Oaks, on the Tuesday evening of 9 August 2005. Paramedics proclaimed his death, and the autopsy showed that the cause of death was congestive heart failure.

After he died, one of his cousins talked about him saying:  ‘He must have seemed so intimidating to people who didn’t know him, but since I grew up with him I saw him differently than everyone who only saw him as a 7 1/2 foot giant.  To me, he was just Matt, just plain old Matt, no better, worse, or different than me.  He was just a really cool and laid-back kind of dude. He liked everyone.  And he was definitely one of the coolest people in our family! He looked forward to his many years of acting to come, and it’s a shame we won’t get to enjoy the many great roles he would have played.’

Height and net worth