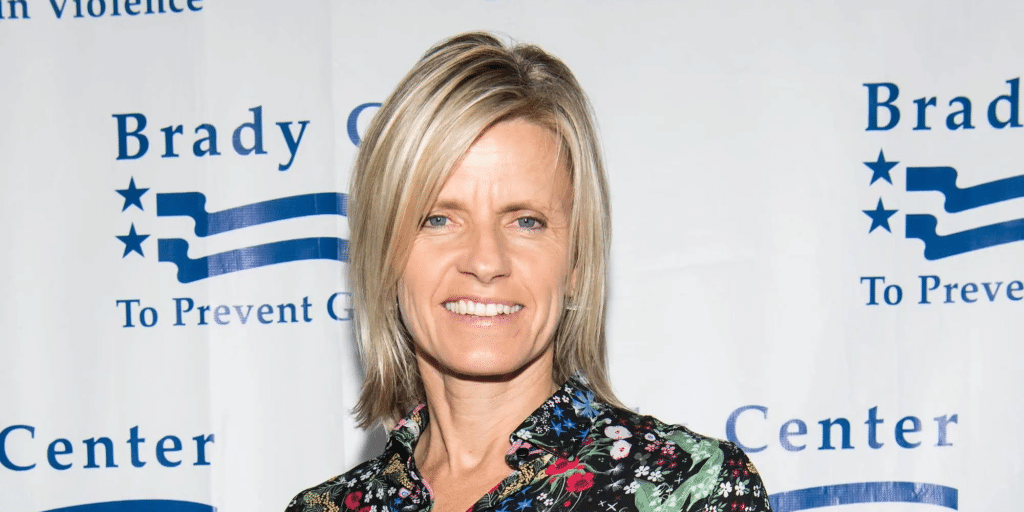 Swedish actress and producer Viveca Birgitta Paulin, was born on 24 April 1969, in Askim, Göteborg och Bohus län, Sweden, into a working class family but who were financially comfortable; her mother was a homemaker, and her father ran his own business. It’s unknown if Viveca has any siblings, or if she is an only child. After matriculating from high school, she attended Pomona College from which she graduated in 1991 with a Bachelor of Arts degree, majoring in History.

Viveca is probably best-known for her work in 1997’s “Money Talks,” 1998’s “A Night at the Roxbury”, and 2018’s “Ralph Breaks the Internet.” She is also known for being American actor and writer Will Ferrell’s wife.

Viveca and Will’s oldest son, Magnus Paulin Ferrell is following in his parents’ footsteps, by working as an actor. Aside from his cameo in “Anchorman 2: The Legend Continues,” he also appeared in “If You Build the House They Will Come” in 2017. As young as he is, Magnus’ net worth is already $150,000. The young actor looks a lot like his mother, he has blue eyes and blond hair just like her.

It is too soon to tell if Magnus’ younger brothers, Mattias and Axel will also join the entertainment industry, but it would come as no surprise if they do.

Who is Will Ferrel?

American comedic actor John William ‘Will” Ferrell was born on 16 July 1967, in Irvine, California, USA. His mother, Betty Kay Ferrell (née Overman) was born in 1940 and worked as a teacher at Santa Ana College and an elementary school called Old Mill School.

His father, Roy Lee Ferrell Jr.  was born in 1941, and worked for the Righteous Brothers as a keyboard and saxophone player. Both of Will’s parents are from Roanoke Rapids, North Carolina, and moved to California in 1964. Will has a younger brother named Patrick. Their ancestry includes Irish, German and English.

Will suffered from pyloric stenosis when he was a baby, narrowing of the stomach opening, and had to undergo a pyloromyotomy to rectify his condition. He was eight-years-old when his parents divorced, and when asked about their split, Will said that he was always an optimistic child, “I was the type of kid who would say, ‘Hey, look at the bright side! We’ll have two Christmases.’”

Luckily for the children, the divorce was not nasty, and both parents were determined to give their children the best life possible. The reason for their divorce was Roy’s job – he worked in the entertainment industry, his paychecks were inconsistent, and he had to travel often, leaving home for months at a time. Ironically, Will looked at his father’s life and decided that he didn’t want to go into show business, but rather wanted a steady job.

In 1995, NBC’s sketch comedy series, “Saturday Night Live” asked Will to join their cast, and he became one of the most famous SNL cast members, after his seven seasons. Will then hopped to the big screen, and starred as Buddy in the 2003 Christmas film, “Elf”, 2004’s comedy “Anchorman: The Legend of Ron Burgundy” as Ron Burgundy – reprising his role in the 2013 sequel, “Anchorman 2: The Legend Continues” – as well as many others, including animated films such as “Curious George” in 2006 and “Megamind” in 2010.

In 2007, he got together with close friend Adam McKay to create the website, “Funny or Die,” on which they upload comedic skits, starring or featuring other celebrities.

Will is a member of what’s known as the “Frat Pack,” a group of leading Hollywood comedy actors who rose to fame in the late 1990s and early 2000s. Other ‘members’ include Steve Carell, Ben Stiller, Owen and Luke Wilson, Jack Black and Vince Vaughn.

Will has received many awards for his achievements in the film industry, including three Primetime Emmy Awards, a Tony Award and a Golden Globe Award.

Prior to the COVID-19 pandemic, Viveca had a full schedule. In 2018, she voiced an auctioneer in the animated film “Ralph Breaks the Internet,” and appeared as Annika Bjornberg in the television series “Younger”.

As she is not as famous as her husband, Viveca has appeared in many small roles in films and series, including in the 1998 romcom, “A Night at the Roxbury” as Porsche Girl #1, whereas Will played one of the leading roles, Steve Butabi. The film is based on a recurring SNL sketch called “The Roxbury Guys”, about two dim-witted brothers who dream of owning their own club. Will plays one brother alongside Chris Kattan, who plays Doug Butabi.

In 2006, Viveca was an executive producer on the comic drama coming-of-age film, “Nail Polish.” The protagonist, Allison Silverman has always felt like an outcast, and when facing challenges in different aspects of her life, she decides to spend her summer holiday on the Jersey Shore, where she is forced to grow out of her shell, and go through life experiences she’d never had before then.

Viveca was heavily pregnant in 2010 when she joined her husband for the taping of the “The Tonight Show with Conan O’Brien” finale.

She performed a sketch at the end of the final episode, playing Dawn, the wife of Will’s rock ‘n’ roll character, performing “Free Bird” with Conan, Beck, Max Weinberg and Ben Harper to close the show. Viveca gave birth to her and Will’s last child, Axel Paulin Ferrell only a few hours later.

Viveca and Will met in 1994 while attending an acting class, and dated for a short period before deciding that they were better off as friends. Viveca was a great friend to Will, and even got him a typing job when he needed money to support his acting and pay his rent. Once Will was cast in SNL, he moved to New York City, but even though they lived far from one another, they ensured to remain close friends. Will spoke about that time of their life with Elle magazine, “I was in another relationship… Viv and I would talk as friends for two hours, and it would feel like five minutes, and then my girlfriend would call and after 15 minutes I’d be like, ‘… I should get some sleep.’ For me, Viv was the one that got away.”

Happy Anniversary Will Ferrell and Viveca Paulin! The hilarious actor and his wife are celebrating 19 years of marriage today!

When SNL was on a season break, Viveca invited Will over for a beer. Will told Elle that Viveca could only confess her feelings to him after downing her beer, “I didn’t play it cool at all,” he told Elle, “I went, ‘I just told my uncle that I’m going to marry you one day!” Will made his prediction come true, after a few years into dating. Will took Viveca to a beach they went to on one of their first dates, but in an interview with People magazine, Will shared that the proposal didn’t go according to plan, as Viveca didn’t want to go to the beach at night, because she found it too creepy, but Will argued that it was romantic. Will recounted popping the big question, “I was trying to think of what I was going to say and it just turned into, ‘So I, uh, really like you and, uh, anyway…’ So it was kind of funny, but not on purpose.”

The brothers made brief appearances in “Anchorman 2: The Legend Continues” and in 2017, the family made an appearance together on the red carpet premiere for “Daddy’s Home 2.”

The Ferrell family usually split their time between their houses in Los Angeles, New York City and Sweden, however, during lockdown in 2020, they chose to live in Sweden. Their Swedish home is a cute cottage located in Gnesta, – they typically spend their summers vacationing there. Their main home is in Los Angeles, and it has four bedrooms and four bathrooms.

When asked how you know when you have found ‘the one’, Will replied, “Before you marry a person you should first make them use a computer with slow internet to see who they really are” – it may have been a joke, but it was solid advice.

Viveca is a lover of art.

She became an auctioneer at Los Angeles Modern Auctions after leaving her position as an independent auctioneer, where she had famous clients including Butterfield & Butterfield and Bonhams.

She has been on the Board of Trustees of the Los Angeles County Museum of Art since 2011. Her and Will support the Hammer Museum, the MAK Center and the Museum of Contemporary Art.

In December 2021, she made her Instagram account @viveca_paulin private. When her account was public, most of Viveca’s posts were of the family’s pets, showing how fond she is of them, and showcasing her love for animals.

Viveca has shoulder-length blonde hair, bright blue eyes, stands at 5ft 9ins (1.75m) and weighs 176lbs (80kg), with vital statistics of 32-28-30. She has a slim build which she maintains by exercising regularly, and practicing yoga to keep both her mind and her body young and active. She doesn’t have tattoos, and her only piercings are in her earlobes.

As of April 2022, Viveca’s net worth has been estimated at $80 million; half of her husband’s reputed wealth which is around $160 million.