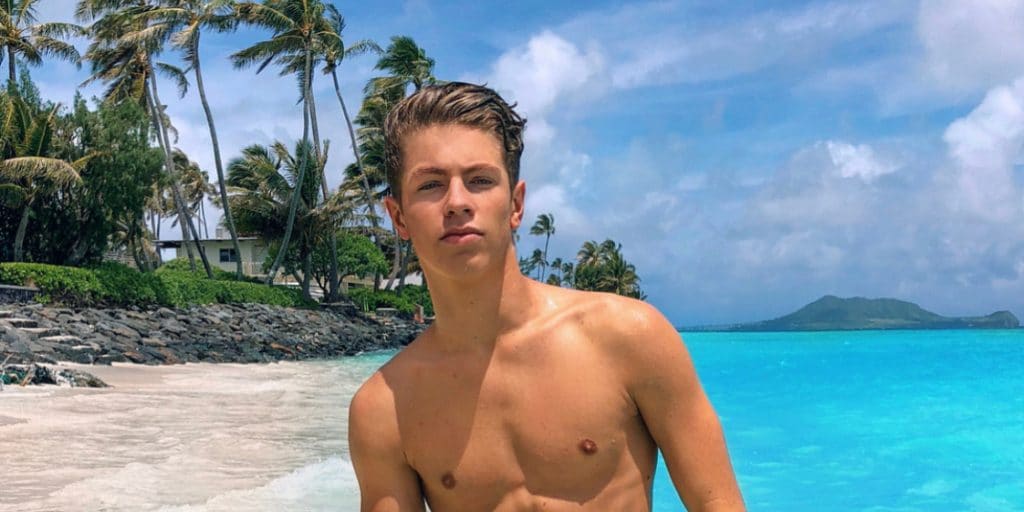 Who is Ben Azelart?

Ben Azelart is an American YouTube star, social media personality, and an actor, probably best known to the world for his YouTube channel on which he uploads various funny content from challenges to pranks, and details from his daily life, having already amassed millions of fans.

How Old is Ben Azelart? Childhood, and Education

Ben Azelart was born on 10 January 2002 under the Capricorn zodiac sign, in Texas USA. He is the son of Lionel Azelart and his wife Jill, and has an older brother Julien, with whom he spent his childhood in Hawaii. He went to Kailua Intermediate School in Hawaii, but there is no information about him obtaining a college or a university degree.

Ben started his YouTube channel in 2014, but uploaded his first video only in August 2018, entitled “The Start of My YouTube!”, which showcased him with his friends exploring the beautiful island of Maui, and skateboarding around the area. He continued uploading skateboarding videos and picturing the landscapes of the eponymous island, which brought attention to his channel, and encouraged him to continue in the same fashion. Hawaiian videos continued to appear on his YouTube channel, and the number of his followers increased at a rapid pace.

This encouraged Ben to introduce different content, such as the “Q&A” video, and the “Couple Yoga Challenge”, among many others.

His career as a YouTuber was heading in the right direction, which is mirrored in the number of his subscribers, today amounting to more than 8.6 million people from around the world. He’s continued to make new videos until the present day, and has changed his content a bit, making it more mainstream, such as giving people mobile ‘phones, earphones, and prize money after successfully completing a certain challenge.

His videos have been viewed more than 1.4 billion times, and some of the most popular include “Cutting People Earphones, Then Giving Them Airpods”, which has over 40 million views, then “BUYING Everything In One COLOR For 24 Hours CHALLENGE!”, viewed over 30 million times, and “Spin The DARE Wheel Challenge w/ CRUSH! (crazy)” which has been watched around 30 million times, among many other videos that have only increased his popularity.

Additionally to YouTube, Ben is a TikTok star with close to 15 million followers, and more than 340 million likes on his official TikTok account.

He’s amassed this kind of fame by uploading short and funny videos of himself and his friends dancing and having a good time.

Ben is a rising actor, having made his debut in 2018 with the role of Bobby in the sci-fi series “Brobot”, co-starring Kenny Johnston and Circus-Szalewski, and continuing with the role of Dorian in the TV comedy-drama series “No Good Nick”, with Siena Agudong, Lauren Lindsey Donzis and Kalama Epstein in the lead roles. Most recently, he launched his own show – “Stay Wild” – which he hosts, the first episode having aired on 14 March 2021.

When it comes to his personal life, Ben has showcased his personal endeavors through his videos, sharing all the ups and downs that have struck him on his journey to becoming a YouTube star. He was in a relationship with Lexi Rivera from 2018 to 2020, and fans were crazy about them and how cute they were when together, so were left devastated following the news of their break-up, however, Ben and Lexi have remained on good terms and close friends. Lexi Rivera is a YouTube sensation with over seven million subscribers on her official YouTube channel, uploading challenges, pranks and daily vlog videos.

Ben was single for some time following their break-up, however, a few months ago he came forward with a new date, Hannah Thomas.

As of late 2021, Ben Azelart’s net worth has been estimated to be around $2 million, earned through his successful career as an online content creator and actor. Moreover, he’s launched his own clothing line, StayWild, which includes hoodies and sweatpants.

Skateboarding turned him into an early star on YouTube and he has continued to perform skateboarding tricks to the present day, though not on camera as it’s his number one hobby.

He’s also an avid scuba diver and loves to spend time in the water.

He’s more than active physically, as he also goes to the gym several times a week, thus maintaining his perfect figure. He’s taken the liberty of sharing info on his training and dieting with his fans, in hopes that it will be useful to some of them.

Since launching his YouTube channel, Ben has made a lot of friends, including Brent Rivera, who is his ex-girlfriend’s brother.

Ben is allergic to peanuts; he’s afraid of drowning, cockroaches, and other flying insects.

He’s fluent in the French language.

An avid animal lover, Ben has a pet dog, and sometimes uploads his pictures onto Instagram.

Although he loves summer the most, Ben is no stranger to winter and winter sports, as he also likes to ski and snowboard, however, showing off muscles in the sun is his activity number one.

He loves to watch films, and has said that his favorite actor is Keanu Reeves, and his favorite films are the “Matrix” and “John Wick” franchises.