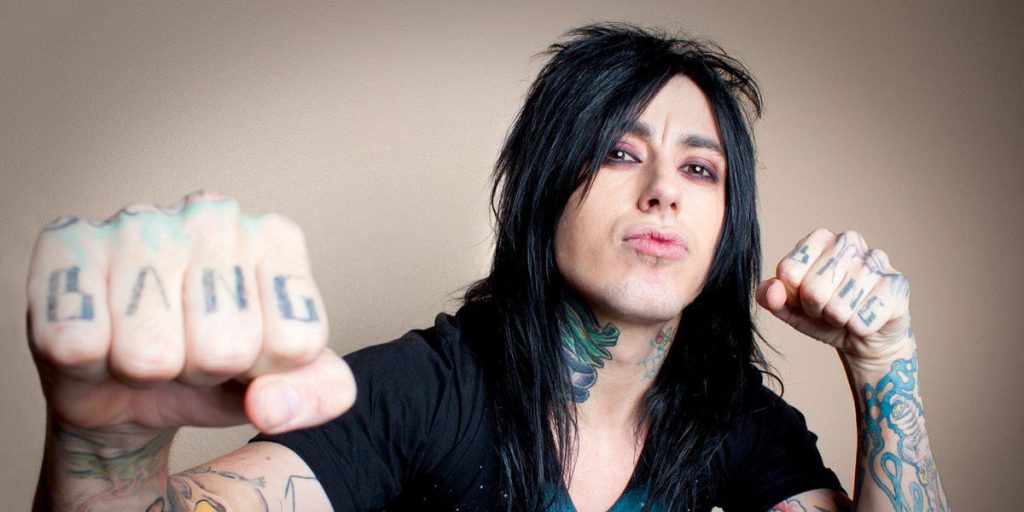 Ronnie Radke is an American singer, rapper, and record producer, best known for being the former frontman of the band Escape The Fate. All you need to know about Radke’s life and musical career is detailed in the biography below.

Ronald Joseph ‘Ronnie’ Radke was born on 15 December 1983 under the zodiac sign of Sagittarius, in Las Vegas, Nevada USA, to Russell Radke and an unnamed mother. He has traces of Blackfoot Indian and Portuguese ancestry, but holds American nationality.

Ronnie grew up with his brothers Anthony James Radke and Matthew Radke. Their mother was absent for most of their childhood because she was a drug addict, and according to Ronnie, this caused him to have a ‘general lack of respect for women.’ However, they reunited in 2014.

In 2013, Ronnie’s older brother, Andrew Radke, died due to a traffic collision. He has a niece and four nephews from Andrew, namely; Sabrina, Troy, Nathan, Joshua, and Dylan.

At an early age, Ronnie learned to play the piano and guitar, mostly inspired by the rock band ‘Blink-182’, and so played their songs. Ronnie formed several bands in high school, and eventually ran away from home to play in his first formal band, ‘3.0’, with his friend Mitch. He lived with Mitch and his family for a while before returning home to his father and to school, but finally dropped out again. According to Radke, he couldn’t concentrate in school because he kept daydreaming of great things he could be doing.

He joined another band called ‘Lefty,’ then created ‘True Story’ with Max Green, whom he met at a talent show – they recorded a demo track, “This Is Not the End”, so Ronnie’s musical career started.

Ronnie Radke’s musical career officially kicked off when Escape The Fate was formed in 2004. Bryan Monte Money (lead guitarist) contacted Max Green (bassist), who referred Radke as a lead vocalist, and the trio formed the rock band later recruiting Robert Ortiz, Omar Espinosa and Carson Allen. In September of 2005, the band won a radio contest judged by the American rock band My Chemical Romance. Winning the contest enabled them to open the show during My Chemical Romance’s headlining tour with Alkaline Trio, and Reggie and the Full Effect.

The band caught the attention of Epitaph Records and landed a record deal with the label.

In May 2006, the band released its debut EP “There’s No Sympathy for the Dead”, produced by Ronnie’s close friend Michael Elvis Baskette. Then in September, the group released their debut album, “Dying is Your Latest Fashion”, which performed averagely on the music charts. On 20 November 2007, Radke released his last project with the band, their “Situations EP”.

On 6 May 2006, Ronnie was involved in an altercation with Marcel Colquitt, which resulted in the killing of 18-year old Michael Allen Cook. Although Radke didn’t shoot Cook, he and Marcel Colquitt were charged for their involvement in Cook’s death. In court, it was determined that Ronnie had acted in self-defense, so the District Attorney did not prosecute him.

Two years after Cook’s death, Ronnie pleaded guilty to battery with substantial bodily harm, indicating his criminal involvement in the death of the 18-year old. Radke was placed on a five-year probation and was ordered to pay the sum of $92,372 as restitution for Michael Colquitt’s (the wounded one) medical bills.

Subsequently, Ronnie Radke failed to report to his probation officer, and was sentenced to two and a half years in prison. During his prison sentence, Escape The Fate fired Radke in mid-2008,  replaced by Craig Mabbitt, a former member of Blessthefall.

While he was incarcerated, Ronnie with the help of Nason Schoeffler formed another rock band, From Behind These Walls, in 2008.

As soon as he was released from prison in 2010, Ronnie dived back into work, and the band name was changed to Falling In Reverse. The original band members were Ronnie himself (lead vocalist), Schoeffler (bassist), Jacky Vincent (guitarist), and Derek Jones (rhythm guitarist). Later they recruited former Bigger Lights drummer Ryan Seaman. The band signed with Epitaph Records in 2011, and released its debut album “The Drug In Me Is You” on 26 July 2011. The album sold 18,000 copies within the first week, and peaked at number 19 on the Billboard 200.

In the early 2010s, Radke also started pursuing a solo career, while still the lead vocalist of Falling In Reverse. He created his YouTube channel on 13 May 2013, subsequently releasing a solo song, “Fair-Weather Fans”, and the following month another song, “What Up Earth?”.

In 2014, he released a solo rap mixtape, “Watch Me” which featured artists such as Tyler Carter, Jacoby Shaddix, Craig Mabbitt, and Deuce, among others.

In 2012, Ronnie Radke was in a relationship with Sally Watts, but was accused of striking her. He didn’t attend any of the court hearings, so was arrested in Glendale, California, and released on $30,000 bail.

Then he started dating model Crissy Henderson, and they were engaged by 2013. They welcomed a daughter in May 2013, but called off the engagement due to Ronnie’s infidelity.

In late 2018, Ronnie started dating Saraya Belvis (former wrestler also known as WWE Paige), and they’ve been together since then.

Ronald Radke is 6ft 1in (1.85m) tall and weighs around 187lbs (85kgs). He has short black hair, which he sometimes dyes blonde, and brown eyes. He likes to wear big black vests, leather jackets, and sweatpants.

In late 2021, Ronnie Radke has an estimated net worth of $4 million from his long career as a rock musician and songwriter. The 38-year-old singer bought a home for himself and his girlfriend WWE Paige, which she gushed about online.