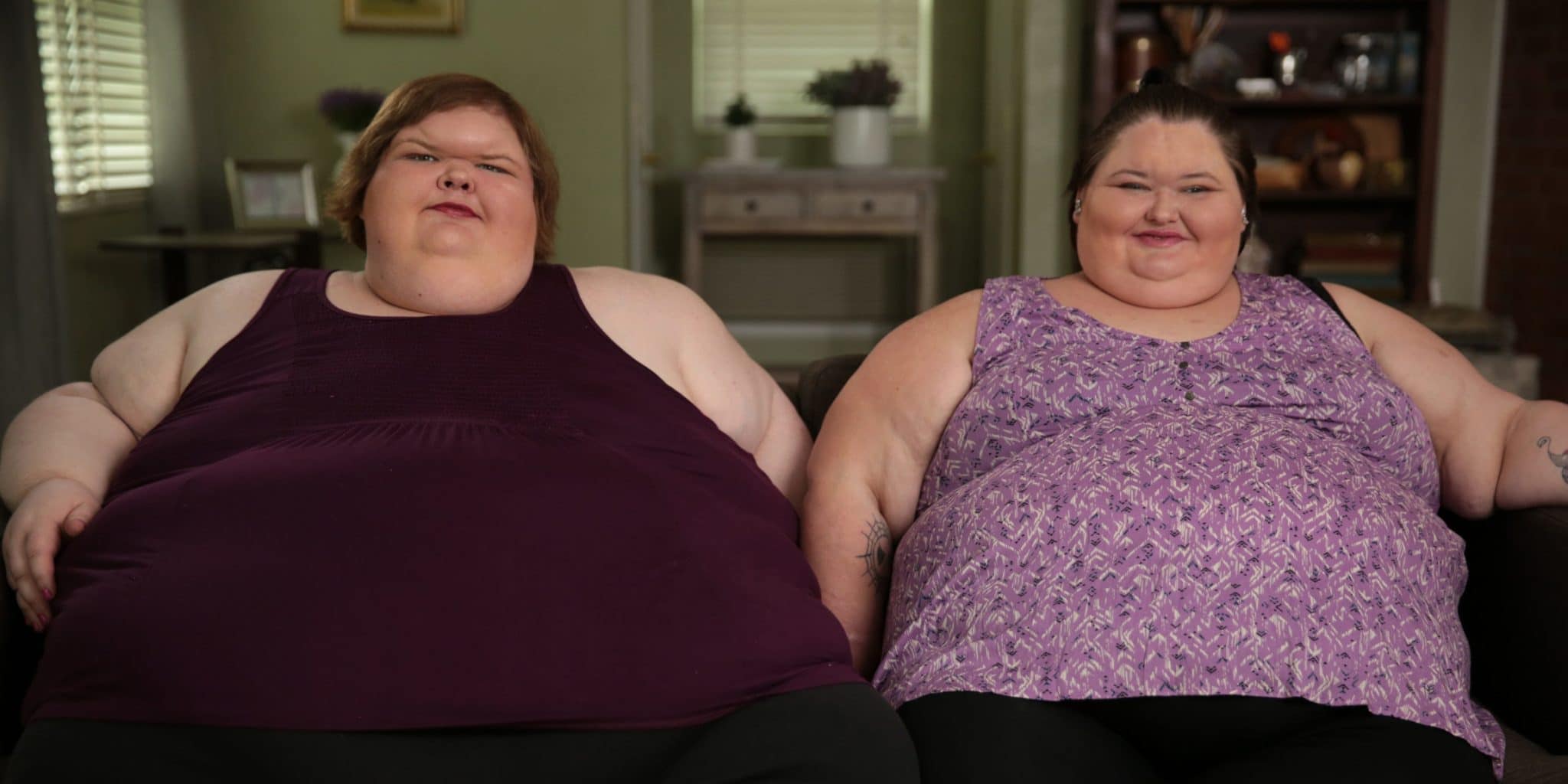 Those who are fans of the television channel TLC have certainly come across the popular reality show “1000-lb Sisters”, which follows the lives of the overweight sisters Tammy Slaton and Amy Slaton-Halterman. TLC has a couple of other popular series which features obese people who are trying to lose weight, but unlike the other shows in which each season follows several unrelated people, “1000-lb Sisters” is focused solely on Tammy and Amy, but also features Michael Halterman (Amy’s husband) and their relatives Amanda, Misty and Chris.

The two women are in their 30s, and decided to lose weight because they were both planning to have children. Prior to the show’s airing, Tammy weighed around 640lbs (290kgs), while Amy weighed about 400lbs (180kgs), and we’re going to check up on their progress later on in this video/article. Tammy was in a lot worse situation than Amy, as she was nearly permanently bedridden, and needed help performing even the simplest tasks around the house.

“1000-lb Sisters” has been airing since early 2020, and already numbers three seasons, initially depicting Amy and Tammy they’re talking to the doctors about the surgery which they could undergo to remove additional weight. However, only Amy has achieved the necessary wight loss to qualify for bariatric surgery, which she had in 2020, while Tammy has learned that this is still impossible, because she hasn’t lost any weight at all.

How rich are the sisters?

The sisters have similar but still different net worth, because they are apparently not paid equally for their roles in the show “1000-lb Sisters”, but also because Amy is making more money on the internet than Tammy.

The girls aren’t making money only from this show, as they also have their own YouTube channels, and Amy’s today subscribed to by more than 500,000 people. She’s nowadays mostly focused on uploading videos which feature her baby boy, although she’s also into sharing details of her everyday life, and talking about her progress in losing weight.

Tammy is less popular than Amy on YouTube, although her self-titled channel’s still today subscribed to by close to 150,000 people. Similar to Amy’s videos, Tammy’s show talks about her everyday life, and doing various popular challenges; many of the videos show how Tammy and Amy were getting along while Amy was pregnant.

Amy launched her YouTube channel “Amy Slaton-Halterman” on 11 January 2011, but she only uploaded her first video “New slaton sister vlog” on 30 January 2014.

She has amassed more than 50 million views of all her videos combined, and it’s widely believed that she’s more popular on the network than her sister because Amy’s more mobile and committed to her goal, thus making her everyday life more interesting. We’ll be mentioning three of her most watched YouTube videos, which have helped her attract many subscribers.

Amy’s #1 video “The power of make-up” was uploaded on 4 April 2016, and shows her putting on make-up, as well as teaching her fans how to do it properly, as a way to point out the amazing transforming power of make-up.

Her second most popular video “Trying new makeup” has been viewed over 2.5 million times since 22 January 2017, and is quite similar to her #1, but this time features her putting on make-up which she has just bought.

Amy’s third most watched video “Chubby bunny challenge” has been viewed close to 2.5 million times since 10 November 2014, and shows Amy and Tammy taking on the ‘Chubby Bunny Challenge’; it’s a game which requires the contestants to put increasing number of marshmallows into their mouth, while they then have to pronounce difficult sentences.

Tammy launched her YouTube channel on 1 March 2018, which has since amassed more than six million views of all her videos combined; her debut video was uploaded on 20 May 2018, entitled “I’m baking a cake”. Tammy uploads less often than Amy, but she often collaborates with her on her videos; we’re going to mention three of Tammy’s most popular YouTube videos, which have helped her attract many subscribers.

Her #1 video “Day one of my diet” has been viewed more than 350,000 times since 3 September 2018, and shows Tammy on the very first day of her diet; this was shot long before she started starring in her and her sister’s show “1000-lb Sisters”.

Tammy’s second most popular video – “so happy to be home” – has been watched close to 200,000 times since 28 November 2020, and shows her talking about the two weeks which she spent in hospital suffering from pneumonia.

Her third most watched video, ”the trick or treat challenge”, has been viewed over 150,000 times since 9 February 2021, and shows Tammy and Amy taking on the ‘challenge’, which is actually a game of apple bobbing.

The worth of Tammy’s YouTube channel has been estimated at more than $15,000.

Amy Slaton was born in Kentucky, USA, on 28 October 1987 – her zodiac sign is Libra, and she holds American nationality.

People like Amy for a couple of things, but mostly because she’s so determined to succeed in losing weight, most of her motivation coming from in wanting to have a baby.

Amy was raised in Kentucky alongside Tammy, by their mother Darlene Slaton, and father Bugger Bob about whom nothing’s known, as the sisters still prefer to keep some details of their lives private; it’s been reported that he passed away before Amy had turned 10. Darlene went on to marry Robert ‘Frank’ Franklin, an American TV personality, and gave birth to Amy and Tammy’s half-brother Chris Combs.

Amy began gaining weight while she was still attending a local high school, as she wasn’t physically active and preferred to spend her time alone (or with Tammy), mostly because she was often bullied by her peers.

It was also in high school that she met her future husband, Michael Halterman; the two married in Nashville, Tennessee in 2019, and in December 2020, after around two years of struggling to lose weight, Amy gave birth to their son Gage Deon Halterman.

Amy prefers to only appear in her and her sister’s show “1000-lb Sisters” – it’s said that she has been invited to make a guest appearance in a number of talk-shows, but that she’s refused for various specified reasons. She has also talked about how she and Tammy got their own show in the first place; it was their YouTube followers who contacted TLC and told them about the sisters, and when the producers watched their videos, they fell in love with how they joke around and enjoy spending time together. Amy is quite passionate about her show, and has even asked for a bigger budget for its third season.

Amy’s age is 34. She has long black hair and brown eyes, her height is 5ft 4ins (1.65m) and since losing weight including through surgery, she today weighs around 270lbs (120kgs), while she’s planning to lose an additional 100lbs (45kgs).

Tammy Slaton was born in Kentucky on 27 July 1988 – her zodiac sign is Leo, and she holds American nationality. Even though her sister has managed to lose weight, it appears that this hasn’t been enough of a motivation for Tammy to follow in her footsteps, as she’s still today overweight, however, a recent life-threatening event has made her become more serious about having a healthier lifestyle.

The two girls supported each other while they were growing up, and occasionally worked various jobs to help their mother financially. They attended the same school, but the year younger Tammy was one grade behind Amy. Both girls follow Christianity.

Tammy’s today in a relationship with Jerry Skyes, a non-celebrity American man who has appeared alongside her in a couple of episodes of the show “1000-lb Sisters”.

Tammy is 33 years old. She has long black hair and brown eyes, her height is 5ft 9ins (1.75m) and she weighed 640lbs (290kgs) on 6 December 2021, actually an increase  since “1000-lb Sisters” began airing – she lost 60lbs in the first season, while her goal was to reach 100lbs, so went to a special hospital to seek help, but left because she missed home, and during her subsequent stay at home managed to gain 70lbs.

Amy’s an Instagram star, and is today followed by more than 400,000 people, while she’s uploaded close to 500 pictures onto it, most of which today feature her baby boy.

She launched her Twitter account in November 2019, and it’s today followed by over 10,000 people, and on which she enjoys tweeting her opinion on various topics. Unlike her sister, Amy’s not active on TikTok, but several accounts with her name have been launched by her fans.

Tammy is nearly as popular as her sister on Instagram, with her account numbering more than 300,000 followers, but has uploaded only 50 pictures, most of which only feature her face. She launched her Twitter account in May 2017, and it’s today followed by close to 5,000 people, while she’s mostly focused on sharing other people’s tweets. Tammy is a TikTok star, and is today followed by close to a million people on the network, while she’s amassed over five million likes of all her videos combined; she mostly uploads comedy content, and occasionally videos in which she’s showing her make-up.

Tammy’s life is threatened by her weight, and in the third season of her and her sister’s show, she returned to rehab because of her depression, drinking problems and vaping, however, only a day after that, she had to be taken to hospital in an ambulance, with her brother Chris by her side, because she had stopped breathing. The doctors told Chris that Tammy’s lungs were giving up, and that her entire body was ‘shutting down’. The family had already started thinking about making funeral arrangements, while the doctors had put Tammy into a medically-induced coma and on a ventilator. Tammy could’ve died at any moment, remaining in a coma for four days; she woke up on the fifth day, saw her sister and brother close to her, and told them how she loved them and only wanted to go back home.

After she’d awoken, Tammy underwent a tracheotomy, a surgical procedure in which a breathing tube is inserted into the patient’s hole in the throat. She stayed at the hospital for three additional weeks, prior to returning to rehab.

What are Amy and Tammy doing today?

Amy’s today mostly focused on raising her baby, but is still actively working on losing more weight. She has cut most ‘bad food’ from her diet, and her current goal is to reach a weight of 165lbs (75kgs). Latest news is that she is expecting again, apparently another son.

After her near-death experience, Tammy has started taking better care of herself, and after only a month in rehab, following her tracheotomy, she reputedly lost 115lbs (50kgs). In an episode of her show’s third season, Tammy spoke about how she was tired of being sick all the time, tired of partying and drinking, and that she was ready to return to rehab. She also added: ‘I’m not doing this for anybody but myself. I’ve decided to put myself first. Take care of Tammy.’

What happened to “The New Yankee Workshop”?

Where is Tom Oar from “Mountain Men” now?