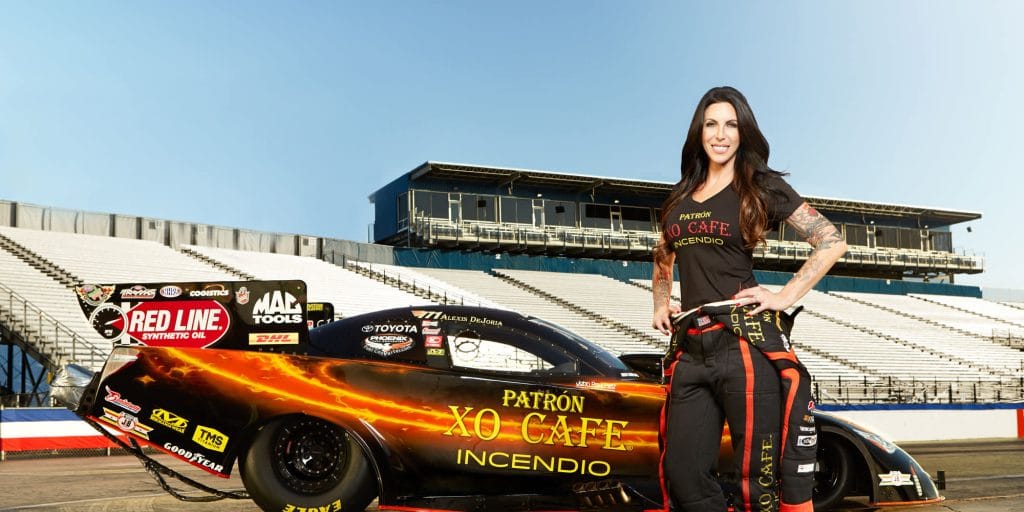 Alexis DeJoria is an American competitive drag racer for the National Hot Rod Association. She has also been the spouse of famous entrepreneur and TV personality Jesse Gregory James.

Her father, John Paul, is a very well-known American figure, a self-made billionaire who went from rags to riches by working hard and having a business mindset.

John grew up extremely poor, and stayed in multiple foster homes as a child. He eventually earned his wealth from being co-founder of John Paul Mitchell Hair Products and The Patrón Spirits Company, and was also a founding partner of the House of Blues chain of nightclubs, plus has interests in a variety of oil and technology companies. He has even made an impact on the TV and film industry by making multiple cameos as himself on different shows, as well as being an investor on “Shark Tank.”

John Paul Dejoira is known to have a net worth of at least $2.5 billion.

As a young teen, Alexis started off by working for her father’s companies, trying to find her place by moving around many different departments, including marketing and public relations.

Yet, she always had a passion for cars, and start her drag racing career in 2005. In the beginning, she competed in the Super Gas category, later turning to the Super Comp category; only eight months after her first NHRA race, she had first place in the Sportsman Nationals held in California, an impressive feat and should be credited to her love for the activity. After her first big win, she spent two years racing in the Top Alcohol Funny Car category.

Sometime in 2009, she briefly co-owned and operated a racing team called Stealth Motorsports, but which was active for only three years. The, she went solo again, and won an NHRA national event in the funny car category, at the NHRA Northwest Fall Nationals held in 2011, just the second woman to ever win this. Afterwards, she joined Kalitta Motorsports as a funny car driver. in 2011, and around the same started racing a fuel funny car for the Texas Fall Nationals.

In 2014, Alexis set another record by becoming the first woman ever to complete a sub-four second pass, at the Pomona NHRA Winternationals. In the following race in Phoenix, she won another race in the funny car category, and in May the same year, she set another Funny Car track record at the Atlanta Dragway. She also broke the Brainerd International Raceway’s Funny Car record in 2014, and won the Indianapolis US Nationals. After many more wins, Alexis announced a two-year hiatus that would end in 2020.

She returned with sponsorship from ROKiT Phones and ABK Beer, who placed their branding on her car, uniforms, and other merchandise.

During her career, Alexis has only had two major accidents, in 2009 and 2016, the latter causing a minor fracture of the left pelvis. As of 2022, she is still actively racing, and updates on her schedule can be found on her website.

Alexis has a daughter, Isabella DeJoria, born in 2003, the father of whom is unknown; there is no information anywhere about this relationship. However, her most notable and public relationship was with motorcycle expert and TV personality Jesse James. They married on 24 March 2013 at a festive yet intimate event on John Paul DeJoria’s large estate.

Seven years later in 2020, the two divorced due to Jesse’s infidelity, sources revealing that he cheated on Alexis at least 20 times with proof from multiple social media platforms such as Snapchat and Instagram. In fact, this wasn’t the first time Jesse cheated on his wife.

Alexis is estimated to have a net worth of $100 million as of early 2022, earned largely through competitive drag racing. Her father’s net worth is in the billions, as the creator of internationally known Patrón Tequila.

Her most notable features are the colorful tattoos running up her arms.

Who is Jesse James?

James is a noteworthy entrepreneur who caught his big break when he became part of Discovery Channel’s “Motorcycle Mania” documentary. After the show was aired, he became a sought-after designer, building motorcycles for celebrities such as Keanu Reeves, Kid Rock and Shaquille O’Neal. He’s still active in the motorbike industry today, as well as pursuing other business ventures.

Despite being recognized for his motorbike talents, he also gained quite a reputation for his messy personal life. Jesse has been married four times and is a father to three children.

His first marriage was with Karla James and lasted 11 years, and produced two kids before divorcing in 2002. Only a few months later, James married again, to adult-film star Janine Lindemulder; the two had a daughter but divorced in 2004. Jesse’s third marriage occurred in 2005 to famous film actress Sandra Bullock. Amid tabloids exposing him cheating and partaking in many affairs, Sandra divorced him in 2010. Jesse then spent a month at a rehab facility to treat his anger management and sex addiction issues, before in 2013 marrying Alexis DeJoria, only for the almost inevitable divorce to happen seven years later.