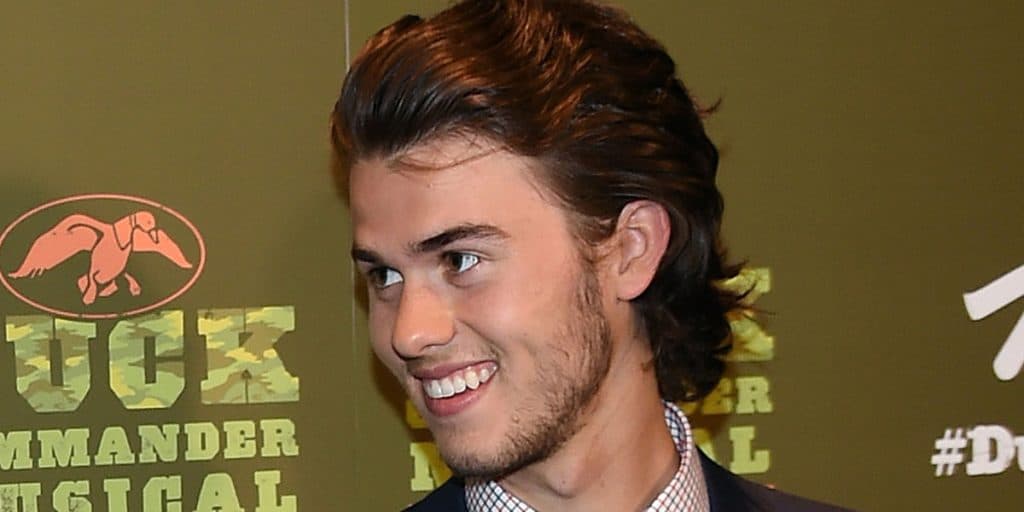 John was born in West Monroe, Louisiana USA, on 11 October 1995 – his zodiac sign is Libra, and he holds American nationality. He’s a reality TV star, actor and an author, perhaps known best for appearing on the reality TV series “Duck Dynasty”.

John Luke was born to the businessman Willie Robertson and his wife Korie. He has five siblings, sisters Sadie, Bella and Rebecca, and brothers Will and Rowdy, who all grew up to be devout Christians. John Luke and his siblings spent summers at a Christian youth camp, Ch-Yo-Ca, started by their great-grandfather in 1967.

Their family life was partially documented in the reality TV show “Duck Dynasty”, which aired from 2012 to 2017 – viewers of the show saw John Luke transition from a teenager into an adult, matriculating from Ouachita Christian High School in 2013, and enrolled at Liberty University in Lynchburg, Virginia, where he studied Camping Outdoor and Adventure Leadership.

John Luke made his TV debut in his father’s reality TV series “Duck Dynasty”. The show premiered in March 2012 on A&E network, and ran for five seasons. It followed the lives of the Robertson family, as they operated their family business, Duck Commander, which makes products for duck hunters. The main stars of the show were family patriarchs Phil and Si Robertson, along with their sons Alan, Jase, Willie and Jep, who are all known for their long beards and Evangelical Christian lifestyle.

Prior to “Duck Dynasty”, some members of the family appeared in the Outdoor Channel show “Benelli Present Duck Commander”, and its spin-off “Buck Commander”.

During its five years long run, “Duck Dynasty” was one of the most popular reality TV shows in the US, with its fourth season premiere drawing more than 11.8 million viewers, making it the most-watched non-fiction cable series in history. In its first season alone, the show generated more than $80 million in ad revenue, and another $400 million from the merchandise sales. All of the members of the Robertson family went on to appear in various other TV shows, and some have capitalized on their fame by launching their own businesses.

More recently, in 2021 we saw John Luke in four episodes of the talk-show “At Home with the Robertsons”, hosted by his mother Korie.

Since “Duck Dynasty” concluded, John Luke has been working on various other projects; he has started a career a motivational speaker, sharing his passion for faith, and has also written five children’s books, featuring his family members as main characters, including “Be Your Own Duck Commander”, “Phil and the Ghost of Camp Ch-Yo-Ca” and “Jase & the Deadliest Hunt”.

Furthermore, John Luke is also the owner of the Railway Coffee, a chain of coffee shops in Ruston, Louisiana, and runs the Ch-Yo-Ca summer camp, which he attended as a child.

John Luke is married to Mary Kate McEacharn. The two met as teenagers in 2010 at the Ch-Yo-Ca camp. After dating for more than four years, they became engaged in October 2014, and in June 2015, John Luke and Mary Kate who were 19 and 18 years old respectively, tied the knot at the Robertson family farm in West Monroe, Louisiana. The wedding was officiated by John Luke’s father, Willie, in front of more than 800 guests – footage from the wedding was also featured on “Duck Dynasty”.

In October 2020, Mary Kate gave birth to their son Shep, and in April 2021, the couple welcomed their daughter Ella.

What happened to John’s house?

In April 2020, Luke’s old home in Monroe, Louisiana was splattered with bullet holes, but luckily no one was injured. It was later revealed that the shooter was a man named Daniel Dean King Jr., who was subsequently detained and charged with aggravated assault by drive-by shooting, criminal trespassing and criminal damage to property. In addition, he was given a restraining order, which requires him to stay at least 1,000ft (305m) away from John Luke and his family.

Who is John’s father Willie Robertson?

Willie Jess Robertson was born in Bernice, Louisiana USA, on 22 April 1972 – his zodiac sign is Taurus, and he holds American nationality. He’s a reality TV star, entrepreneur, author and a news contributor, but known best for being one of the main stars of the reality TV series “Duck Dynasty”.

Willie was born to Phil and Marsha Kay Robertson, three days before his father’s 26th birthday; he has three brothers, Alan, Jase and Jep, and a younger sister Phyllis.

In 1994, Willie graduated from Northeast Louisiana University with a Bachelor’s degree in business – his expertise later helped his family’s small business grow into a multi-million-dollar empire. The sudden success of Duck Commander generated a lot of interest in media, and eventually inspired the inception of the TV show “Duck Dynasty”.

In 2006, Willie started another business, Buck Commander, which focuses on the manufacture and sale of hunting equipment. The company has also created the “Buckmen” DVD series, and the reality TV show “Buck Commander Protected”, which aired on Outdoor Channel.

In 2014, Willie was a guest of the US Representative, Vance McAlister at the State of the Union Address, and in the same year, the Louisiana Governor Bobby Jindal rewarded Willie with the inaugural Governor’s Award for Entrepreneurial Excellence.

In 2021, he was a contestant as ‘Mallard’ in season six of the singing competition show “The Masked Singer”.

Willie is known for his Christian faith and conservative political views, also for being a patriot, wearing a bandana in the pattern of the American flag at almost all times.

As of February 2022, his net worth has been estimated at more than $40 million.