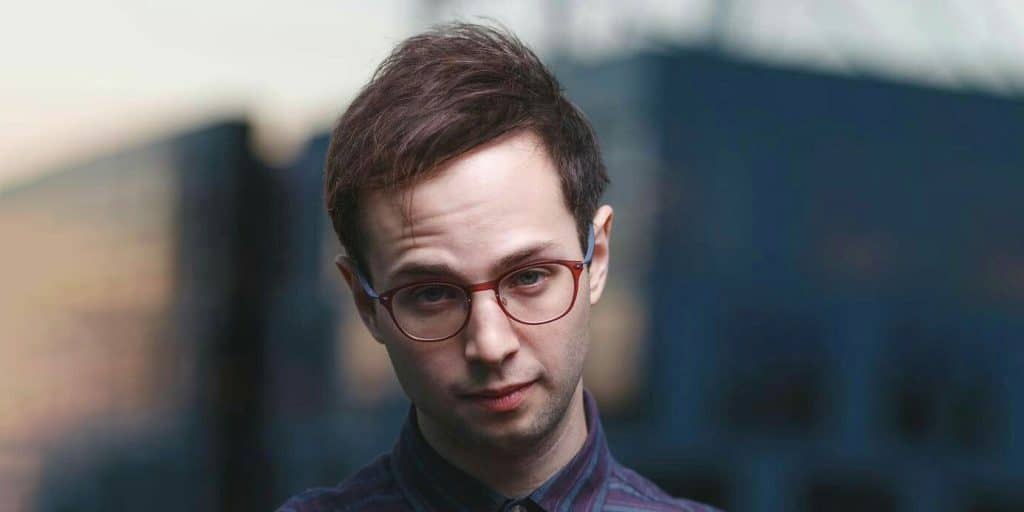 Zach is a multi-talented American producer, writer, YouTuber, actor and director, perhaps most famous for his works with The Try Guys comedy group, in which he develops videos – he’s captured public attention with his crazy and mischievous ideas and interesting character.

Born in Scarsdale, New York State, on 26 July 1990 under the Sagittarius zodiac sign, Zach Kornfeld is 31 years old as of 2021. He was born to Margo and Adam Kornfeld who are Jewish, and was raised with his sister Stephi. Despite being born to his Ashkenazi Jewish family, Zach didn’t celebrate his bar mitzvah (coming of age ceremony) and doesn’t follow kosher (Jewish dietary restrictions), as he revealed in a YouTube video.

He grew up a super creative child, and at the age of 10, he used stuffed toy animals and Lego to make short videos.

Upon the completion of his primary school education, Kornfeld went to a local Hebrew School, but soon dropped out to join a regular school. During his early days, the YouTuber was involved in a car accident that left his neck injured by a seat belt, and was fortunate to survive; during an interview he revealed that the experience was very traumatizing. He attended a local high school before he relocated to Los Angeles for further studies, enrolling at Emerson College, and graduating with a Fine Arts bachelor’s degree in 2012.

Zach is an animal lover who kept a pet cat a few years ago. He currently owns a blue-eyed Australian Shepherd dog named Bowie, whom he got as a puppy in 2017.

When it comes to his eating habits, Zach has dairy allergies as his fiancee revealed during an interview, adding that her husband-to-be likes ramen and ice cream.

After graduating, Kornfeld began his career as an intern at the Weinstein Company, an independent film studio where he worked as a “Step Up 3D” dance film Production Assistant, and was also a comedy writer at the firm.

2014 saw him beginning his career journey with a digital media firm called BuzzFeed; he was tasked with content creation and rose to prominence when he started making appearances in several oddly hilarious and weird YouTube short videos, including “If Men Were Disney Princesses.” During the same year, he joined The Try Guys, and was seen entertaining his fans with videos such as “The Try Guys Recreate Celebrity Make-up Looks Drunk,” in which they put on make-up to look like celebrities such as Jennifer Lopez, Rihanna, Lady Gaga and several others. As a member of Try Guys, Zach was one of “TryPod’s” hosts, and later hosted its spin-off called “Guilty Pleasures.”

What The Try Guys Is All About

The Try Guys online show was launched on 12 September 2014, and has Keith Habersberger, Eugene Lee and Ned Fulmer as its other members. They hosted “Squad Wars” YouTube Red competition show, which featured several American socialites, and were rewarded with a Streamy Award nomination in the category Show of the Year in 2017 and ’18, as well as contributing to the awards ceremony as the hosts.

The team made videos together until they left BuzzFeed (which owned The Try Guys) in 2018, to start their own firm, which they named 2nd Try LLC. The group wrote a book entitled “The Hidden Power of F*cking Up” in 2019, which featured their stories and challenges, and which became a New York Times bestseller.

Apart from YouTube, Zach is popular on other social media platforms and uses his handles to update his fans about his current career endeavors, as well as featuring his fiancee in many short video clips. He joined Twitter in 2009, and has amassed a huge following. He is also active on Instagram (@korndiddy) as well as TikTok, on which he posts his hilarious content.

Kornfeld’s obsession with dogs drove him to open an Instagram account for his dog, Bowie the Pooch, who is named after rock music icon named David Bowie.

The account is followed by more than 150,000 followers, who became obsessed with Bowie immediately he started posting his photos. He likes dressing him (together with Maggie) with garments, hats, and bandanas, which his fans find hilarious.

Kornfeld is engaged to Maggie Bustamante, whom he has been dating for more than three years now. According to Maggie, they met in a club and fell in love shortly afterwards. His fiancée is an established wellness and health advocate, who is popular on Instagram, going by the name @magsbustamante. He had initially kept his relationship details away from the public eye, but later revealed through  a YouTube video on 12 December 2018 that he was seeing someone.

Maggie announced on 1 September 2020 in the “Try Wives” podcast that Zach had proposed to her, adding that Zach popped the question a few days after his birthday when having dinner together, and that it caught her by surprise. Subsequently, Zach organized a picnic set-up at a beach that was toned with beautiful flowers and macaroons.

On 9 September 2017, Zach posted a video on BuzzFeed revealing that he was suffering from ankylosing spondylitis, a very common autoimmune disease, an ailment of the immune system that attacks the body’s healthy cells, which causes inflammatory arthritis affecting large joints and the spine.

He stated that he lived with the disease for a long time without knowing, saying ‘…when I sneezed, I could feel the pain shoot through my back through the front through my chest cage.’ At first, he assumed that the complications were caused by scoliosis, but when he went to a rheumatologist, his problem was diagnosed. He is currently working out regularly, observes a healthy diet, and has changed his lifestyle completely.

Zach is of Caucasian ethnicity, with blue eyes and short brown eyes.

He’s 5ft 8ins (1.74m) tall and weighs around 130lbs (58kg), his chest and waist sizes are 38 and 29 respectively, and he wears shoes size 8(US). He has a smiley face tattoo drawn on his buttock. The famed YouTuber suffered from patchy hair loss (also known as alopecia areata), and in 2009 underwent a medical procedure to restore it, through a special combination of microblading and surgery.

Zach has accumulated his net worth mostly through his YouTube career. He’s also an entrepreneur who owns a tea shop and several other independent projects that have also contributed to his fortune. As of 2021, he is authoritatively worth around $2 million.