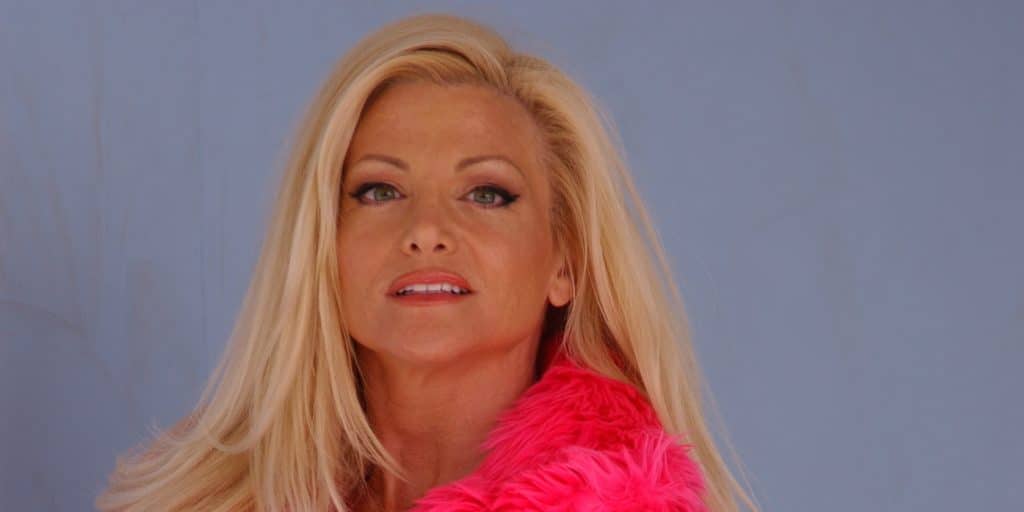 Who is Julie Michaels?

Not to be confused with the musician of the same name, Julie Michaels is an American actress born in Northwest Washington, Washington D.C, USA, on 20th July 1970. The feisty blonde, who is 5ft 4in (1.65m) tall and weighs about 150lbs (68kgs), is best known for her fight scene with the Hollywood hunk Keanu Reeves in the film “Point Break”.

An avid fanatic of gymnastics, Julie attended the University of Washington as an NCAA gymnast, and later developed an interest in martial arts, which led to her training with the famous sensei Benny Urquidez, having previously also studied kick-boxing in Thailand.

There’s little information available regarding her parents, Juan Manuel and Julie Doreen, but it’s believed that the blonde was brought up as an only child on a ranch. With that said, an article states that both Julie and her husband were raised in military families.

1989 was the year Julie made her cinematographic debut in “Road House”, consequently taking the world by storm in her role as Denise. Co-starring opposite Patrick Swayze, the Washington native’s performance was dubbed as “iconic” and “impossible to forget”, receiving rave reviews and cementing her position in showbiz, despite being a newcomer.

The following year was considerably slower for Julie, who only appeared briefly in an episode of “1st & Ten” and “Super Force”. Nevertheless, she more than made up for it with her role in 1991’s “Point Break”, starring Keanu Reeves, Patrick Swayze and Gary Busey. Julie’s unforgettable fight scene with the first actor led to her being dubbed “the babe who nuked Keanu”, and the action thriller became a box office success, which was nominated for three MTV Movie Awards. In 1992, Julie was spotted by fans in an episode of “Tales from the Crypt”, and an episode of “Jake and the Fatman”, as well as portraying Irene in “Doctor Mordrid”.

The following year, the thespian showed her acting range by playing Susan in “Witchboard 2”, a grisly R-rated horror movie, and portraying a quick-witted FBI agent in “Jason Goes To Hell: The Final Friday”. The mid-to-late 1990s saw Julie appear in four episodes of “Baywatch” portraying various characters, play Jane in the 1997 action blockbuster “Batman and Robin”, and appear in two episodes of the award-winning sci-fi series “Space: Above and Beyond”. Between recurring roles, the talented actress also made cameo appesrances in series such as “Buffy the Vampire Slayer”, “House of Frankenstein”, and “The Strip”.

Julie’s acting career seemed to lose traction after the turn of the century, as between 2000 and 2002 the performer only made brief cameos in a mishmash of projects, with the majority of her uncredited roles passing by unnoticed, including playing a harem girl in “The Scorpion King”, a female club goer in “Layover”, and a fame-hungry groupie in “Rock Star”. Nevertheless, the star didn’t let her change of luck get her down, and instead set to working harder than ever. In 2004, Julie made cameos in “Clubhouse” and “She Spies”, and was credited for portraying a ‘Slutty Woman’ in a 2005 episode of the long-running soap opera “Desperate Housewives”.

2006 saw the celebrity depict a florist in the pilot episode of “In Justice”, a fashion show patron in an episode of “House”, and a barista in “Ghost Whisperer”, to name a few. In 2009, Julie lent her talents to the 16-minute short “Wake Up and Write”, a Deep Blue Sea production which was filmed in sunny Santa Monica, California. From 2010 to 2020, Julie made brief appearances in four series, including “Big Bang” and “Weeds”, played Naran Anie in “The Legends of Nethiah”, and Mary in “Chick Fight”, plus having roles in three independent shorts.

Despite Julie’s acting career fizzling out with time, she has been an extremely successful stuntwoman, with over 90 credits under her belt.

Some of the former sex symbol’s performances include playing Pamela Anderson’s stunt double, co-ordinating stunts on eight episodes of “The Newsroom”, and lending her talents to five episodes of “The Matador”. To date, Julie’s longest-running stunts co-ordinator project has been on 54 episodes of “Jane the Virgin”, closely followed by her work on 36 episodes of “SEAL Team”, which led to an Emmy nomination. Julie began transitioning from an actress to a stuntwoman as far back as 1991, when the producers of “Point Break” asked her to switch characters in order to finish a scene in one shot.

Despite being reluctant to take on a nude role, which saw her go straight from the shower to beating up Keanu’s character, Julie realized that she enjoyed the experience, and began taking stunt work seriously. Julie met her future husband Peewee Piemonte, the famous stunts co-ordinator, on the set of “Jason Goes To Hell” in 1993. The couple, who have no known children, tied the knot in the same year, and began working together on various projects, thus solidifying Julie’s love for stunts. Today, Julie and Peewee are described as “the most successful husband and wife team in the business of stunt co-ordinating”, and enjoy a seemingly blissful marriage which has yet to be sullied by scandals.

The couple often advocate for better conditions in the sector, and it’s said that the key to their fruitful professional and personal relationships is communication, and sharing the same beliefs. In a rare interview, Julie explained that she was drawn to the world of stunts from her days as a gymnast, adding: “Acting is my first love and will always be my first love, but when you can add stunts on top of that, it made me feel like a really authentic actor”. According to the performer, acting was a solo profession, while in stunts, each person is as important as the next.

As of early 2022, Julie’s net worth is estimated at over $1 million, as one of the most respected veterans in the stunts field. As for Peewee, he’s worth an impressive $19 million thanks to his talents as a stunts co-ordinator, actor, and assistant director.