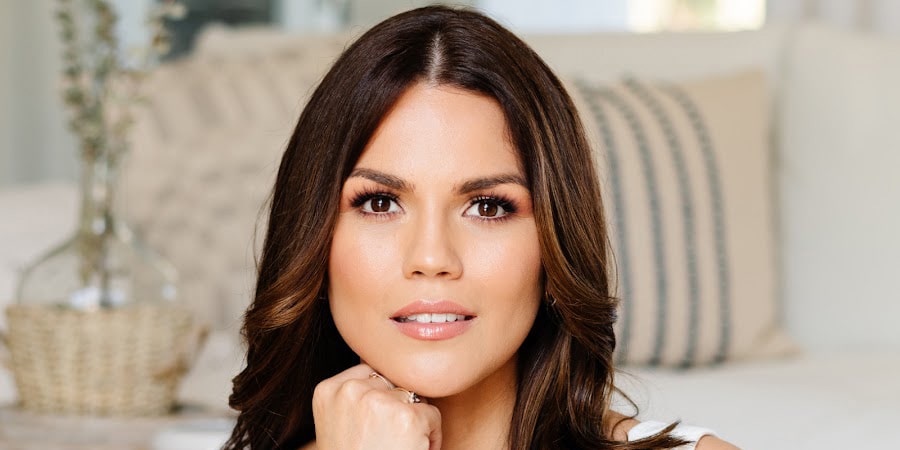 Mexican journalist, television host and reporter Karina Banda, was born into a working-class family on 21 August 1988, in Salamanca, Guanajuato, Mexico. She grew up in Monterrey, Nuevo León, and attended Angels High School. Karina has stated that her childhood was a very happy one, and her parents were always supportive of anything she tried out. According to some sources, she has three siblings; we know for certain that she has at least one brother, who is named Edson Banda.

In 2005, she was accepted into the public university La Autónoma de Nuevo León to study journalism. She graduated in 2011. Karina also attended the University of Texas in Texas, Austin for a year. Two years after leaving there, she studied at a monetary consulting service, Consultoria y Servicios Monterrey.

Karina has also studied acting in Los Angeles, California at Tvi Actors Studio while living there. In interviews, she shared that she has her parents to thank for supporting her through university, but has already paid them back as a way to show her gratitude.

She is best known for working as a host on El Gordo y la Flaca and Univision Deportes.

Who is Carlos Ponce?

Puerto Rican actor, model, musician, and television personality Carlos Armando Ponce Freyre Jr. – professionally known as Carlos Ponce – was born on 4 September 1972, in Santurce, San Juan, Puerto Rico, to Esther Freyre and Carlos Ponce Sr., and grew up with three siblings – Lilly, Francisco and Marivi. His first marriage was in 1996 to Verónica Rubio, and they had two sons and two daughters together – Sebastián Joel Ponce, Giancarlo Ponce, Savanna Ala Ponce, and Siena Natasha Ponce. Verónica and Carlos split in 2010.

Carlos’ acting career began at the tender age of six years of age, with him appearing in Spanish soap operas – mainly those premiering on Telemundo and Televisa. From there, he worked his way onto US television screens. He is best known for appearing in “Spy” as Matthew Wright, “Couples Retreat” as Salvadore, “Deuce Bigalow: European Gigolo” as Rodrigo, and for voicing Santiago Santos in “Maya & Miguel.”

Although Karina is best-known for dazzling as a host on “El Gordo y la Flaca” accompanied by Raul De Molina and Lili Estefan as her co-hosts, her career began many years earlier. When she was 13, she sometimes worked as a radio personality on one of the local Monterrey, Mexico radio stations, which is where her love for presenting was born, and nurtured into the passion it is today.

In 2018, Karina hosted the Sport and Fitness television series “Republica Mundialista Russia”, alongside Montserrat Oliver and Danilo Carrera. The series only lasted for one season, which comprised of 29 episodes.

On 11 June 2021, Karina was announced to be the replacement for Anna Patricia as the presenter of  “Enamorándonos” (Falling in Love), a Latinx matchmaking reality dating show. She confirmed the news on her Instagram account, ‘It’s a YES, YES! I join the family of @enamorandonosusa I am very excited and very grateful that I was chosen as the new presenter, for me it is an HONOR to have this opportunity.’ She thanked her fans for their support, as it was instrumental in promoting her as the candidate for the job. Furthermore, Karina tagged Anna’s account, and wished her success in her future endeavors, while praising her for the work she did as the previous “Falling in Love” presenter. She officially started the job that August; many followers – fans and co-workers – posted comments congratulating Karina on her new job, and expressing their excitement at seeing her on their small screens.

She has also experienced life as an actress; in 2011, she appeared alongside Adam Boggs and Rebecca Berens in “Fracturas del Corazon,” a film written by Leandro Arturo Carrasquero and directed by Leonardo León. In 2016, Karina portrayed Margarita in the Telemundo series, “Case Closed.” directed Ana Maria Polo in the episode about a real-life woman who faces numerous legal battles. She had an affair with her gym coach and it eventually came to light that her daughter was not actually her husband’s child, nor the child of the gym coach.

Her versatility widens even further, as she’s a blogger, focused on several of her favorite topics: fashion, hair, skincare, nails, make-up, kitchen, and home. She also has an eponymous YouTube channel, opened on 25 January 2013, but she only began posting on the channel in 2021 – she posted the channel trailer which received over 13,000 views on 11 March 2021. Karina doesn’t post regularly, but has already earned herself just over 10,000 subscribers.

In her YouTube bio, she announces that along with her channel launch, she also launched her website, www.karinabanda.com, where her blog is housed. ‘… a project made with the heart and born from the illusion of being able to grow and learn together, sharing my tips, tutorials, and advice on lifestyle issues.’ She describes the website and channel as her baby during the pandemic, and thanks her friend Mariela Bagnato for encouraging and motivating her to start the project that she first thought about in February 2020 – with Mariela’s support, she had the channel and website up and running within two months. She goes on to thank her family, friends, fans, and colleagues for their support in the success of the start-up, ‘… this project is for you.’ Karina also promises, ‘Now yes, hold on because here what you will find will be natural, simple, and real.’

Following her time studying acting in California, Karina moved to Miami for her job. She moved back to Miami after her divorce from Douglas, and still resides there with her husband, Carlos.

After two years of dating, she married actor Carlos Ponce on 30 July 2020 in Florida – they met in 2018 at the Global Empowerment Mission Gala at Island Gardens in Miami Beach. Cuban-American model, Lilli Estefan is a mutual friend, and took it upon herself to officially introduce them.  Their first date was on 28 May 2018, after which the pair quickly fell in love. According to some reports, they broke up in 2019 but found their way back to each other before becoming engaged in January 2020. Not only did they keep their reunion lowdown, but they also had a secret wedding ceremony, attended only by Carlos’ twin daughters. They are planning on having another larger, more traditional wedding with family and friends after the pandemic. Karina has said that her husband’s sense of humor is what really attracted her to him, and made her fall in love.

However, she now finds herself having to apologize for her husband’s tendency to laugh at everything.

This is their second marriages – Karina was previously married to Douglas Riggs, an American helicopter pilot. Their wedding ceremony was heavily religious and conducted in the streets of San Miguel de Allende, where they lived together until their divorce. They were married for a very short time, from 2015-2016, but seemed to have parted on good terms as Karina tweeted about being appreciative of Douglas for helping her in her career.

Carlos and Karina do not have children of their own, and haven’t stated whether they are planning on starting a family together. If they do have a child, it will be Karina’s first time being a mother, but she is currently enjoying her time as a new step-mom, and getting to spend time with her four step-children, with whom Karina has a healthy, happy relationship, especially Carlos’ twin girls Siena and Savanna.

Only a few weeks after their wedding, Siena sadly suffered a mental health calamity, and Karina expressed her wish to take that burden away and bear it on her own to protect her stepdaughter from the pain. However, Karina also praised Siena for being intelligent, strong, and admirable for getting herself through that trauma and coming out stronger. She was relieved to share the news that Siena is since much better.

Karina posted a photo of herself and her mother to her Instagram on 10 May 2021 for Mother’s Day, with the caption, ‘MY ACHIEVEMENTS ARE YOUR ACHIEVEMENTS’, adding that the photo was taken on the day she received the keys to her first house. Karina used the post as an opportunity to praise her mom for nourishing her work ethic. ‘I started working at the age of 13, because she taught me to be an independent and hardworking woman.’ She shared that her mother always hoped that Karina would be able to buy herself a house, and she was able to fulfill that goal the previous Thanksgiving Day.

She thanked her mom for her advice and support and declared her eternal, limitless love for her. Concluding the caption with, ‘HAPPY MOTHERS DAY! Congratulations to all those who are moms, and all their moms.’

Karina attracted a lot of criticism in September 2021, after her brother, Edson was a guest on “Enamorándonos.” The backlash really started piling in after he rejected Mariale Jaramillo, a dancer who seemed to have good chemistry with Edson, and even communicated openly and honestly. Karina defended her brother’s decision on social media, insisting that his truthfulness of not feeling a connection with Mariale should be praised as honesty, and is a valuable trait.

In December 2021, Karina announced that she was diagnosed with COVID-19 and was temporarily replaced by Ana Patricia Gámez for the final episodes of “Romancing,” a Univision series she had been presenting. She took to Instagram to update her followers on her condition, saying that she was feeling sick and experiencing common flu symptoms, so decided to put herself on bed rest to recover.

However, the rest didn’t help, and she was forced to consult a doctor from whom she received her diagnosis. After several negative COVID-19 tests, one test came back positive, confirming that her illness was more serious than seasonal flu. She assured fans that she is vaccinated – ‘I have two doses of the Pfizer vaccine and he was about to give me the third dose, but the virus was ahead of me,’ she explained in her post’s caption. She also thanked her followers for being concerned about her health and sending well-wishes. Karina seems to be a strong advocate for vaccinations, as she added that her symptoms were not too serious, which is likely due to the fact that she was already vaccinated against the virus. She ended her post on a hopeful high note, ‘I have faith that I will get out of this quickly.’

She took to Instagram again to advocate for being safe during the festive season – ‘Take good care of yourself and your family, wear masks and avoid hugging and kissing even if it costs us at this time.’ Karina expressed her hopes to be healthy by Christmastime, able to spend the holidays at home with her family, and that her, ‘… personal experience helps prevent more cases or detect some in time.’

Sadly for Karina, her husband spent the festive season working in the Dominican Republic, presenting a Telemundo show entitled, “For Love or Money.”

Karina is 5ft 6ins (1.68m) tall, and naturally has brown hair, but often dyes it blonde or gets blonde highlights added to her natural color.

As of 2021, her net worth is around $500,000. Karina earns her money from hosting and acting, as well as from sponsorship posts on her Instagram, YouTube channel, and blog. The estimated income of a Univision Television reporter is up to $75,804.