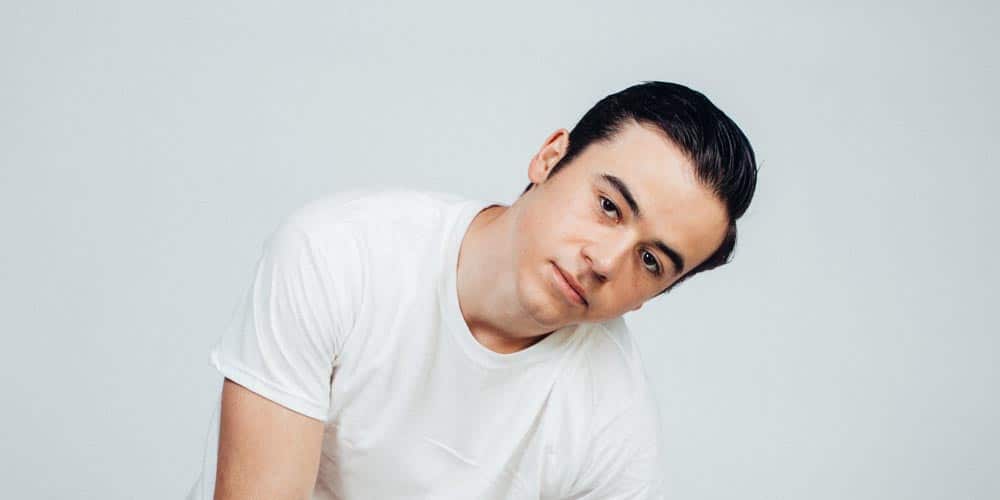 Keean Johnson is an American actor and dancer, perhaps best known for his portrayal of Hugo in “Alita: Battle Angel” and Adam Freeman on “Spooksville”. All you need to know about the young actor is detailed in the biography below, so stay with us.

Keean Manny Johnson was born on 25 October 1996 under the zodiac sign of Scorpio, in Boulder, Colorado USA, to British father Mark Johnson, and an American mother Brenna, who is partly Hispanic. Therefore Keean is of mixed ethnicity, and holds American nationality.

Keean and his younger brother Cade Johnson were raised in Littleton, by the foothills of the Colorado Rockies.

When Keean was five years old, his mother (former cheerleader for the basketball team, Denver Nuggets) took him to dance classes.

Starting from fourth grade, he was homeschooled and studied a mixture of academic and creative subjects; Keean’s mother inspired his love for the arts. According to him, ‘my mum’s big philosophy was, creativity is as important as academia’. Through his mother’s encouragement, he developed many artistic skills such as photography, dancing, singing, and acting.

With his parents’ support, he performed in various theaters around his hometown, and subsequently in New York City.

During one of Keean’s theater performances, he was sighted by casting director Claire Simon, who instantly showed interest in him, encouraged him to move to Los Angeles to study acting, then audition for film and TV roles. As Keean grew into adolescence and his voice started breaking, he took a break from the musical theater, in lieu of an on-screen career.

Keean Johnson’s on-screen career as an actor started in 2012 when he was just 16 years old. Since then, he’s been credited with 16 roles. His film debut was the role as Sam Armstrong in the short film, “Sam Presents”.

Concurrently, between 2013 and 2014, Keean played the role of Adam Freeman in the live-action series “Spooksville”, which premiered on Hub Network in October, cast opposite Katie Douglas, Nick Purcha and Morgan Taylor Campbell. Later that year, he played the main role as Tony in the family drama miniseries, “The Fosters” (2013), followed in 2014 by guest-starring as Angelo ‘A.J’ Sorrento in episode “Yuletide Fortune Tellers” of ‘Switched At Birth”.

Two years later, Keean was cast as Markie Fitzpatrick,  in the comedy drama “Heritage Falls” opposite David Keith and Nancy Stafford. He also landed a TV role in the same year, playing Ozo in the second season of  American teen drama “Guidance”, produced by AwesomenessTV. Later that year, he played the guest role as Finn in a single episode of “Notorious”.

Since 2019, Keean Johnson has held the recurring role of Daniel in HBO’s “Euphoria”, and starred as Junior in “Cut Throat City” (2020).

In the 2021 Hulu’s coming-of-age film “The Ultimate Playlist of Noise”, Keean plays the role of Marcus Lund, an audio-obsessed high school senior about to undergo brain surgery that would make him deaf. So he travels across the country in the quest to record all his favorite sounds in a playlist, when he runs into Wendy (Madeline Brewer), an indie rocker on the run.

Keean Johnson was nominated for two categories of the Young Artist Award in 2013, for his role in “Spooksville”, but lost out.

The 25-year old actor has cited Leonardo DiCaprio, Shia LeBeouf and Tom Hardy as his inspirations.

Keean Manny Johnson is active on social media; his Instagram page (@keeanjohnson) has over 60,000 followers, on which he shares snippets from upcoming projects, and his daily life. He uses his platform as an artist to speak up on societal oppression and racism, and even lent his voice to the ‘Black Lives Matter’ protests of 2020.

In 2018, Keean Johnson started dating 37-year old French actress Sofia Boutella, star of “Climax” Their relationship became public when they attended the “Alita: Battle Angel” premiere together at Regency Village Theatre, Los Angeles. However, it’s uncertain if they’ve broken up or are still together.

Keean Johnson is 5ft 7ins (1.70m) tall and weighs around 132lbs (60kgs). He has short brown hair and brown eyes as well. Keean likes to dress in T-shirts, denim jackets and pants for regular outings, but on the red carpet, you’d find him in a neatly-tailored tuxedo.

In late 2021, the 25-year-old Keean Johnson has a net worth reportedly valued at $3 million, from his decade-long career as an actor and personal projects. Details of property owned by Keean and his family are yet to be revealed.