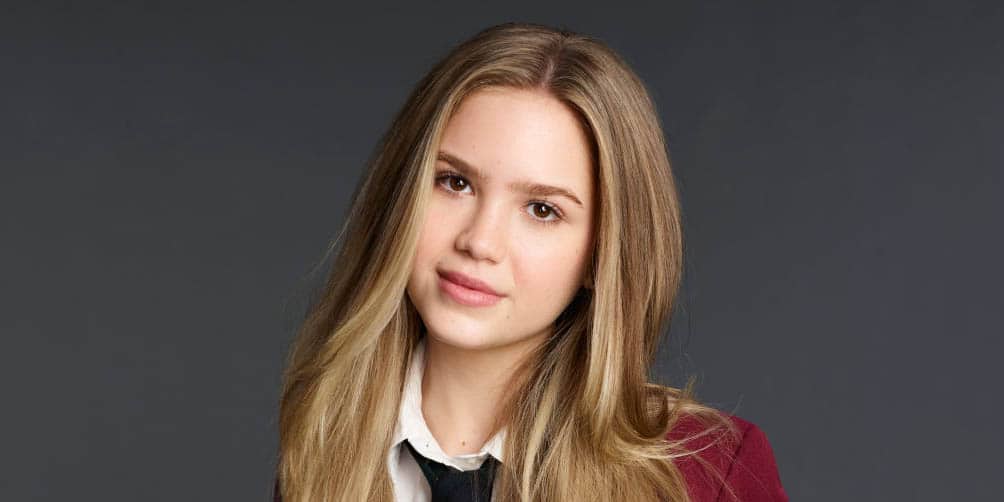 With more than 25 credits to her name, Kyla Kenedy is an established American actress, notable for her protagonist role in the “Raising Izzie” TV film.

Kyla Kenedy White was born under the Aquarius zodiac sign on 4 February 2003, in Charleston, South Carolina, USA, which makes her 18 years old as of 2021. She was raised in her hometown alongside her elder sister who lives with a disability – during her birth, she had an acute brain bleed (intracranial hemorrhage) that ended up affecting most of her capabilities. Kyla revealed that she has a super supportive mother who motivated her constantly, telling her that ‘if you can land a role in a film, you should go after an acting career.’ She has, however, kept her parent’s names under wraps.

White grew up with a strong passion for acting – one of her elementary school teachers noticed her talent and encouraged her parents to consider taking her for auditions. Kyla went to a local high school, where she joined the volleyball team. She matriculated from the school in 2021 and as it seems, she will be focusing on acting as opposed to joining college.

Kyla is a dog lover, and she has two pet dogs named Hana and Cloe.

The Charleston-born star spends most of her spare time reading and traveling, and has visited many US destinations – her dream destination is still Miami, Florida.

Kyla enjoys hanging out with friends and going for late night walks.

She is a physically active sports fanatic, who likes playing golf and tennis.

The “Speechless” star enjoys watching films and series – her favourite actress and actor are Kate Winslet and Jim Carrey respectively, and her favourite films are  “Liar Liar” and “The Eternal Sunshine of the Spotless Mind.”

Kyla began her career in 2011 at the age of eight, when she assumed the role of Fiona in the “Tell-Tale Hearts” episode of the TV crime series “CSI: Crime Scene Investigation.” The following year saw her making her film debut in “The Yellow Wallpaper” thriller, in which she appeared as Sarah Weiland. The Logan Thomas-directed film was an adaptation of Charlotte P. Gilman’s short story, and starred Aric Cushing. In the same year, the South Carolinian actress featured in the film “Rising Izzie”, before assuming the supporting role of Rebecca (2012) in a few episodes of “The New Normal” romantic drama, that starred Georgia King,  Andrew Rannells and Justin Bartha.

Kyla caught the public eye when she appeared in the award-winning AMC TV series entitled “The Walking Dead,” which stars Lauren Cohan, Andrew Lincoln and many others between 2013-2015. In the years that followed, she appeared in the crime drama series “Rizzoli & Isles,” and the “Adam Devine” TV comedy series before voicing Witch Girl in 2015’s animated film, “Doc McStuffins.”

In 2016, she was cast in ABC’s “Speechless” TV series, alongside John Ross Bowie, Minnie Driver and several others. Her role in the production was very easy as she revealed during an interview – it’s about the efforts of a very dedicated mother named Minnie who is willing to do anything to help her special needs son – she featured as his sister, disclosing that she could easily relate the role to her actual life.

She played the role until 2019, then made a guest appearance in the two TV series “Chicago P.D.” and “Chicago Med.”

Kyla’s most recent film appearance was in 2020, when she was featured in “The Phantoms” thriller. The entertainer also recently appeared in NBC’s “My Mayor” sitcom (2021), in which she landed a supporting role. She also voiced Piper in the animated adventure series “If You Give a Mouse a Cookie.”

Kyla has appeared in several print adverts for firms such as Hertz and Macy’s. She is among the most famous personalities who walked Charleston Fashion Week’s catwalk in 2008 and 2009. The “Speechless” superstar also did a dance-off in Chicago with Vincent Ward, a “Walking Dead” co-star, at the Walker Stalker Convention.

She has also made guest appearances in several talk shows including “Red Carpet Report,” “Entertainment Minute,” and “Faith Hollywood TV. ”

Kyla’s praised performance in “Raising Izzie” got her two awards: a Young Artist Award (Best Performance in TV Series) and a MovieGuide Grace Award in 2013. Three years later, she received a Best Actress Award at the Napa Valley Film Festival for the film “Love Is All You Need?” She recently received an Honorary Award (CinEuphoria Merit) for her contribution in “The Walking Dead” series, alongside the show’s cast. Kenedy has been nominated for several other awards, including a 2017 Leading Young Actress Award for her role in the film “Love Is All You Need?”

Kyla has not shed light regarding her love life. Although she hasn’t introduced anyone as her boyfriend, there are rumors spreading on the internet lately concerning her sexual orientation as well as romantic life. Sources reveal that she has been seen on several occasions hanging out off-set with Jack Dylan, who also had a starring role in the TV series “Speeches”, however, neither have confirmed this allegation. Some claim that she might be a lesbian because she hasn’t introduced any boyfriend to the public – nonetheless, she’s kept details pertaining her sexual orientation a secret, and as of 2021 is single and seemingly focused solely on her thriving career.

Most of the people close to Kyla describe her as a kind hearted person, who finds pleasure in supporting charities such as the Atlanta-based Children’s Hospital, and Meals on Wheels.

Kyla is of the white ethnicity; she’s 5ft 6ins (1.67m) tall and weighs approximately 128lbs (58kgs), with hazel eyes and long brown hair. Kyla’s fans noticed in 2019 that her nose looked better than usual, and started spreading rumours on the internet that she had gone for a nose job. As a result, many people started sharing her ‘before and after’ photos on Reddit, discussing these allegations.

Some of her fans explained that she had a medical condition that necessitated the procedure, while others condemned her for undergoing a cosmetic procedure at a young age, just to appear perfect for the Hollywood entertainment industry. The young actress hasn’t shared her comments about the rumors, not confirming whether she went for the surgery or not.

Ever since Kyla started her career as a kid, she has appeared in many projects. Her career is currently at its peak and she has gained both fame and fortune through her acting skills. As of 2021, she is worth approximately $2.5 million as sources reveal.