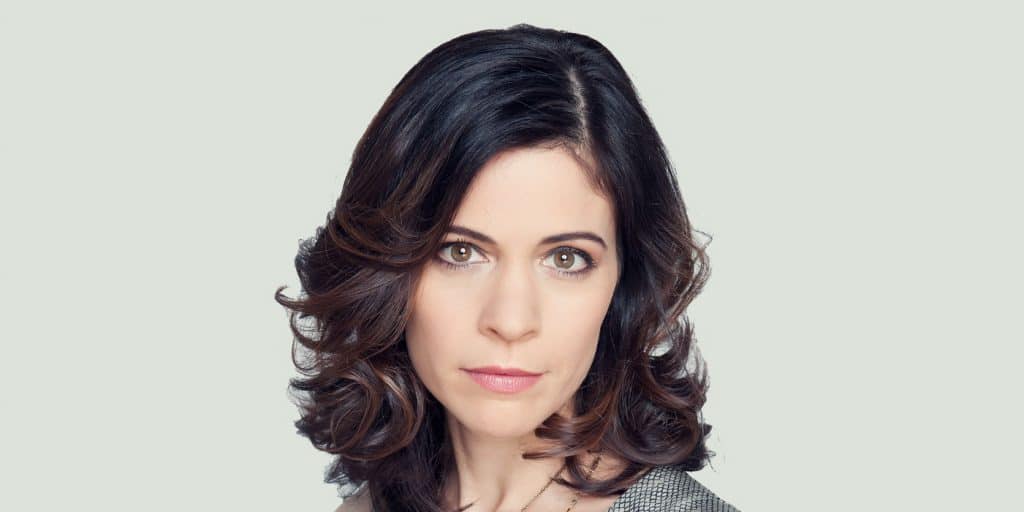 Lauren Stamile is an American actress, who is known to the world through her many recurring television roles, including as Liz Lombardi in the TV series “Off Centre” (2001-2002), then as Agent Pearce in “Burn Notice” (2011-2012), and several other portrayals.

Lauren Stamile was born on 12 September 1976 under the Virgo zodiac sign, in Tulsa, Oklahoma USA. She is the third of five children born to Richard Stamile, a physician, and his wife Terry who was a nurse.

She went to Cascia Hall Preparatory School, and after matriculation enrolled at Northwestern University in Evanston, Illinois, from which she obtained her Bachelor of Fine Arts degree in theater in 1998. Lauren then moved to New York City, feeling that she would have more options there to jump-start her acting career.

Before making her ‘real’ acting debut, Lauren featured in several commercials, including for Old Spice, Summer’s Eve, Volkswagen, JC Penney, and Tassimo, among others. Her debut came in 1999 with a minor role in the TV crime-drama series “Law & Order: Special Victims Unit”, while in 2000 she made her film debut as Mel in the film “Something Sweet”, starring alongside Nick Chinlund and Anne Jackson.

The same year, Lauren co-starred next to Michael Laurence and Diana Demar in the thriller film “Follow Me Outside”.

It was in 2001 that Lauren secured her first major role, as Liz Lombardi in the TV comedy series “Off Centre”, starring in all 29 episodes of the popular series before it was canceled in 2002. She continued her career with a few guest roles in such TV series as “CSI: Miami” and “The West Wing” both in 2003, and “Girlfriends” in 2004, and followed with similar roles in the second half of the decade, making one-time appearances in “Criminal Minds” (2006) and “Heroes” (2007), while she joined the cast of “Grey’s Anatomy” for 12 episodes as Nurse Rose from 2007 to 2008.

Furthermore, from 2009 to 2010 she portrayed Professor Michelle Slater in the Primetime Emmy Award-winning TV comedy series “Community”, starring Joel McHale, Danny Pudi and Gillian Jacobs. She increased her popularity with the role of Lena Simone, one of the main characters in the television romantic mystery-drama movie “Midnight Bayou” in 2009, based on the novel by Nora Roberts, adapted for television by Stephen Tolkin, and co-starring Jerry O’Connell and Isabella Hofmann.

She continued her career in stunning fashion, first as Ann in the drama film “Low Fidelity” in 2011, starring alongside Ed Quinn and Meredith Monroe, and then as Agent Pearce in the Primetime Emmy Award-nominated action crime-drama series “Burn Notice” (2011-2012), with Jeffrey Donovan as the main star. She guest-starred in the crime drama series “The Mentalist” (2013), and also appeared in several episodes of the Primetime Emmy Award-winning thriller drama series “Scandal” (2013-2014), before in 2015 starring in all 10 episodes of the TV thriller crime-drama series “Complications”, created by Matt Nix.

In 2016, Lauren portrayed Susan Weller in the TV drama series “Chicago Fire”, while the next year she guest-starred in the TV procedural crime-drama series “NCIS”.

She had a minor role in the critically acclaimed TV series “American Horror Story” in 2018, and in 2019 appeared as Ellie in a couple of episodes of the TV series “9-1-1”. The same year, she was cast in the award-winning indie horror-comedy film “Bit”, starring Diana Hooper, Nicole Maines, and Zolee Griggs, and most recently, Lauren portrayed Michelle in the sci-fi horror film “Let Us In”, starring Makenzie Moss, O’Neill Monahan, and Eric Callero.

Furthermore, she is set to star alongside Lena Headey and Josh Hutcherson in the television comedy-drama movie “Rita”, which is yet to receive its premiere date.

Lauren has been married to life coach and writer Randy Zamcheck since 24 April 2009; the two attended the same university, however, they didn’t know each other until later in life. She asked for his assistance at some point in her life, which eventually became a long-lasting romance, and in 2007 they became engaged. Since the wedding, the couple has welcomed two children, a son and a daughter, but have kept them away from the public eyes, not even revealing their names.

Lauren Stamile’s net worth has been estimated to be around $3 million as of mid- 2021, earned through her successful career as an actress, during which she’s appeared in more than 60 film and TV titles, all of which have added to her wealth.

The American actress is known for her philanthropic work, and has collaborated with and volunteered for a number of charity organizations, mainly focused on helping underprivileged children.

She is an avid traveler, and in addition to visiting states such as Texas, Florida, and North Carolina, she has also toured Europe, visiting Germany and France among others.

Lauren is an animal lover and has saved a few dogs over the years, adopting them as her own family pets.

She is a gym freak, and trains a few times a week, maintaining her fit figure and condition. She is extremely focused on mental health too, working together with her husband on his material, while also practicing yoga and meditating daily.