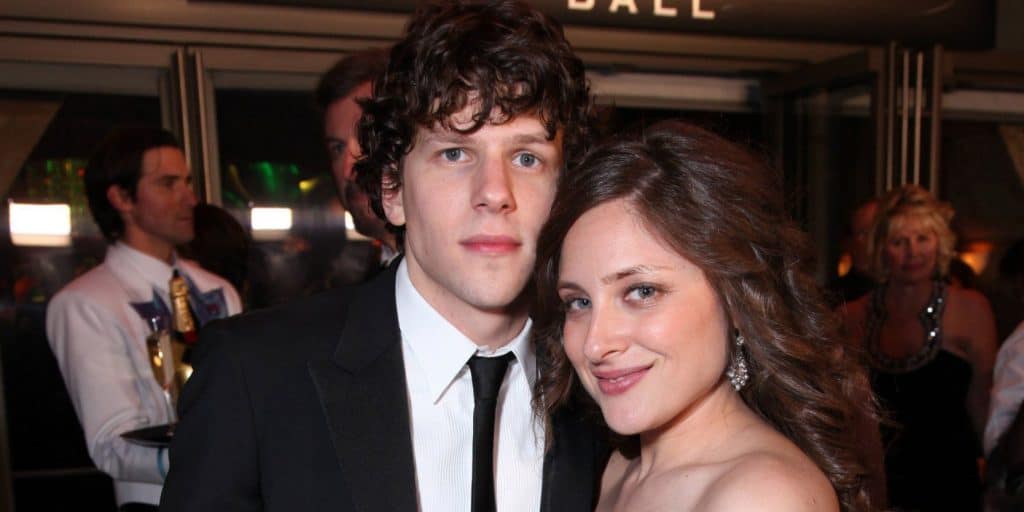 Who is Anna Strout?

Born on May 13th 1983 in New York City, USA, Anna is the wife of A-list actor Jesse Eisenberg, perhaps known best for his roles in “The Social Network” and “Adventureland”. The attractive brunette is 5ft 4in (1.62m) tall and weighs 118lbs (53kgs), with vital statistics of 36-25-38. As far as we know, Anna is an only child, and enjoyed a tranquil childhood with her parents Bob Arnove and Toby Strout, with Bob working as a writer and his partner as a social worker.

Toby, who sadly passed away in 2017, has been praised many times over the years for her positive impact on the community of Bloomington, namely her work as an executive director at Middle Way House, a charity founded in 1971, and dedicated to victims of sexual assault, human trafficking, and domestic violence.

After attending a local high school, Anna graduated with a bachelor’s degree, and soon landed her first job as a set production assistant on “Don’t Say a Word”, the 2001 mystery drama movie starring Michael Douglas and Brittany Murphy. Brought up in an academic household – Toby had graduated from Indiana University with a masters and PhD in Education – it’s perhaps surprising that Anna chose to work in showbiz after her university days.

However, her career choice proved to be life-changing, as in 2002 she worked as an assistant on the set of “The Emperor’s Club”, where she would meet her future husband. Now in 2006, Anna served as the talent and music co-ordinator for “Fire and Ice: The Winter War of Finland and Russia”, an educational TV movie documenting the events that changed the course of history, as Finland’s resistance battled against the Soviet Union in 1939-40. Five years later, Jesse’s wife joined the cast of the documentary “Digital_Man/Digital_World” as an assistant business manager, putting her expertise to good use while liaising with clients, preparing presentations, and writing reports to ensure the project ran smoothly.

Anna’s last known job was as the associate producer for “Light on a Path, Follow”, an eclectic short written and directed by Elliot Montague, and set in rural New England of the 1990s.

As mentioned, Jesse and Anna met on the set of “The Emperor’s Club” when the actor was just 19 years old, and wasted no time in striking up a friendship which would turn into something more. After going strongly for over a decade, the couple shocked their loved ones by breaking up in 2012, the year Jesse was thrust into the limelight after his portrayal of Mark Zuckerberg in “The Social Network”.

Although neither party revealed the cause of their separation, Jesse was probably affected by the unexpected turn of events, as demonstrated by his infamous interview with the Californian journalist Romina Puga, which has since been dubbed “a three-minute insult-fest”, and in which the actor told Romina to “cry after the interview is over”. From 2013 to 2015, Jesse dated the actress Mia Wasikowska of “Alice in Wonderland” fame ,and enjoyed a very public relationship which was eagerly followed by fans and news outlets alike. The popular actors met while starring in “The Double”, an R-rated drama movie which went on to win an award at the Abu Dhabi Film Festival. Maintaining a dignified silence after their split, Anna herself wasn’t linked to anyone, and refused to comment on Jesse’s new love.

Months after his relationship with Mia fizzled out, Jesse surprised the world by rekindling his romance with Anna in December 2015. The couple confirmed the news when spotted together at a basketball game the following month, and less than a year later, Hello Magazine reported that the actor and his partner were expecting their first child. With Jesse and Anna being very private individuals, we still don’t know what their son is named, or if they’re interested in having more children. However, we do know that the playwright and his partner tied the knot in 2017, and haven’t been plagued by infidelity scandals or other public controversies.

Following in her mother’s footsteps, Anna became a volunteer and program producer at Middle Way House before the death of Toby. While non-profit organizations struggled to get by due to a lack of volunteers during the first outbreak of the coronavirus pandemic, the A-list couple selflessly dedicated their time to helping out wherever they could at the charity. The current executive director, Debra Morrow, sang the couple’s praises, adding: “Jesse has even swept and mopped the floors in our transitional housing building. He’s helped out with repairs and maintenance”. As a matter of fact, it wasn’t the first time that the actor gave back to his community.

Other charities supported by Jesse – and possibly Anna – include Keep America Beautiful, Shoe Revolt, and Farm Sanctuary. The thespian, who also lent his talents to the L.A.-based 24 Hour Musicals of 2017 in order to raise funds for the Dramatists Legal Defense Fund, is a staunch supporter of human rights, and regularly supports small businesses.

Due to the gaps in Anna’s curriculum, it’s challenging to calculate her exact net worth, but which is estimated at around $500,000. As for Jesse, he’s said to be worth an impressive $12 million, after shooting to global fame in the early 2010s.

Despite the occasional hiccup in his career, such as his portrayal of Lex Luthor in “Batman. Vs Superman”, most of his projects have been hugely successful, and the multi-talented actor has also written several stage productions since his career debut in the late 1990s. Another factor which contributes to the playwright’s eight-figure fortune is the couple’s frugal lifestyle. Jesse is known to be notoriously frugal, and doesn’t even buy clothes, preferring to keep items from the wardrobe department after shooting a film, which is common practice in Hollywood. Previously, the “Zombieland” star has also spoken about regretting the decision to buy his first home, as he had to foot the pricey maintenance bills, despite rarely being around to enjoy it.