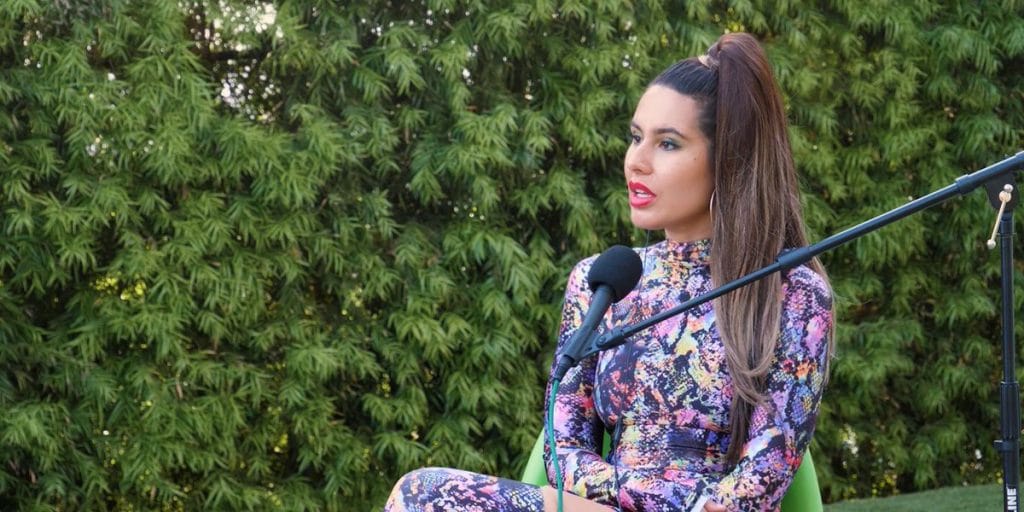 Khalyla Shangra Kuhn was born on 31 October 1984 under the zodiac sign of Scorpio, in Cebu, Philippines. She’s a 37-year-old social media personality, probably best recognized for being the co-host of the podcast “TigerBelly”. She is also known as the wife of the famous actor and comedian Bobby Lee.

How rich is she, as of now? Khalyla Kuhn Net Worth

Khalyla Kuhn spent her early years in her hometown on Cebu, where she was raised by an American father and a Filipino mother, so belongs to a mixed ethnic group, and holds both Filipino and American nationalities There is not much information about her parents, except that her father is a businessman. She has three siblings, and the names of two of them are Khawinda Kuhn and Julianna Kuhn. Regarding her education, Khalyla attended Cebu International School, then upon matriculation, she moved with her family to the United States, where she studied biochemistry.

Before she ventured into the entertainment industry, Khalyla Kuhn spent some time working at the university, where she tutored students in Anatomy, Microbiology, and Physiology. After being involved in a relationship with Bobby Lee, the two launched their own YouTube channel called ‘TigerBelly’, on which they started hosting the podcast of the same title, discussing various interesting topics and interviewing different personalities. The podcast has become very popular over time, since they’ve amassed more than 660,000 subscribers, while their videos have been viewed over 140 million times.

Some of their most popular videos include “Bill Burr is on Bobby’s Radar | TigerBelly 274”, “Theo Von & The Frisbee | TigerBelly 153”, and “Hila and Ethan Klein of H3 | TigerBelly 145”, to name a few. Apart from YouTube, their podcast is available on iTunes, Spotify, and other streaming services.

They also run their second YouTube channel called ‘TigerBellyClips’, on which they share highlight moments from their main channel. They’ve accumulated more than 225,000 subscribers, and over 110 million views in total. Their most viewed videos on the second channel are “Bobby Lee and Bert Kreischer Breakdown The Carlos Mencia and Jay Mohr Situation”, “Joe Rogan Confronts Bobby Lee at The Comedy Store”, and “Bobby can’t watch Asa Akira’s work”, among many others.

Khalyla Kuhn and Bobby Lee met each other through the famous dating app Tinder, initially exchanging text messages before they eventually met and became romantically involved. After dating for a while, the two exchanged their wedding vows at a ceremony held in August 2016. Once they publicly announced their relationship, she became the center of attention, and many of his fans referred to her as a gold-digger, that she used him only to gain popularity, which she denied, saying that she was living a comfortable life before she met Bobby.

Regardless of that, they are still going strong. They don’t have children, and their current residence is in Los Angeles, California.

Who is her husband? Bobby Lee Short Wiki/Bio

Robert ‘Bobby’ Lee Jr. was born on 17 September 1971 under the zodiac sign of Virgo, in San Diego, California USA, but he was raised alongside his younger brother Steve in Poway, California, by their Korean American parents Robert and Jeanie Lee, who were the owners of several clothing stores in both Encinitas and Escondido, California. He had a pretty tough childhood, becoming a drug addict at the age of 12, but becoming sober by the age of 17. He attended Painted Rock Elementary School, and then went to Twin Peaks Middle School and Poway High School, where he was a member of a breakdancing team.

After turning 18, he moved out of his parents’ house, and worked at various odd jobs during the time he was attending Palomar College. However, he didn’t complete his studies as he dropped out.

Bobby Lee started his career in 1994, when he began performing stand-up comedy. After some time, he started doing shows regularly at The Comedy Store in Los Angeles, and eventually made his debut feature film appearance as a Chinese man in the comedy “The Underground Comedy Movie” in 1999. His big break came two years later when he joined the main cast of the Fox comedy sketch show “MADtv”, becoming the first and only Asian cast member. He stayed on the show until it was canceled in 2009, but later returned briefly when the show was revived on The CW in 2016.

Concurrently, he continued to work on other projects – in 2004, he starred as Kenneth Park in Danny Leiner’s buddy stoner comedy film “Harold & Kumar Go To White Castle”, which was both a critical and commercial success; he would later reprise the role in its 2011 sequel, “A Very Harold & Kumar Christmas”. He then took the co-lead role of Aki in the 2007 comedy film “Kickin’ It Old Skool”, next to Jamie Kennedy, and featured as Bobby in the 2008 stoner comedy film “Pineapple Express”, sharing the screen with Seth Rogen, James Franco and Gary Cole. At the time, he also guest-starred in such TV series as “Curb Your Enthusiasm”, “Mind Of Mencia”, and “State Of Romance”, among others.

In 2010, Bobby Lee took the recurring role of Bob Yamamoto in the sports comedy TV series “Cubed”, and featured as Travis in the comedy film “Hard Breakers”, next to Sophie Monk and Cameron Richardson. He then worked again with Seth Rogen on the 2011 sci-fi adventure comedy film “Paul”, in which he played Valet, followed by his portrayal of Mr. Lao in the highly popular political satire comedy film “The Dictator”, starring Sacha Baron Cohen in the lead role. In the same year, he was cast as Park in the comedy TV series “Samurai! Daycare”.

From 2012 to 2013, Bobby starred in the main role of Dr. Yamamoto in the NBC sitcom “Animal Practice”, alongside Justin Kirk and the famous animal actress Crystal the Monkey. After the series was ended, he joined the cast of the Hulu superhero comedy series “The Awesomes”, in which he played Tim / Sumo for all three seasons from 2013 to 2015.

Bobby Lee’s next major appearance came when he was chosen to provide his voice to MC Ferret in the Daytime Emmy Award-nominated PBS Kids educational animated children’s series “Nature Cat”, from 2015 to 2019. While filming it, he was also cast as Truman in the Netflix romantic comedy series “Love” (2016-2018) and played Brian in the Viceland comedy series “What Would Diplo Do?” (2017). He also took the role of Arthur in the ABC sitcom “Splitting Up Together”, from 2018 until it was canceled after two seasons in 2019. Later that year, he became a cast member of the CBS action-drama series “Magnum P.I.”, in which he has since portrayed Jin Jeon. It was followed by his portrayals of Benny in the comedy film “Guest House” (2020) and Derek in the comedy-drama film “How It Ends” (2021). Most recently, he took the main part of Dr. Andre in the Netflix adult animated sci-fi comedy series “Inside Job” (2021) and started playing Jackie Nee in the HBO Max comedy series “And Just Like That…” (2021-present). It’s announced that he will appear as Larry in Eli Roth’s upcoming sci-fi action comedy film “Borderlands”.