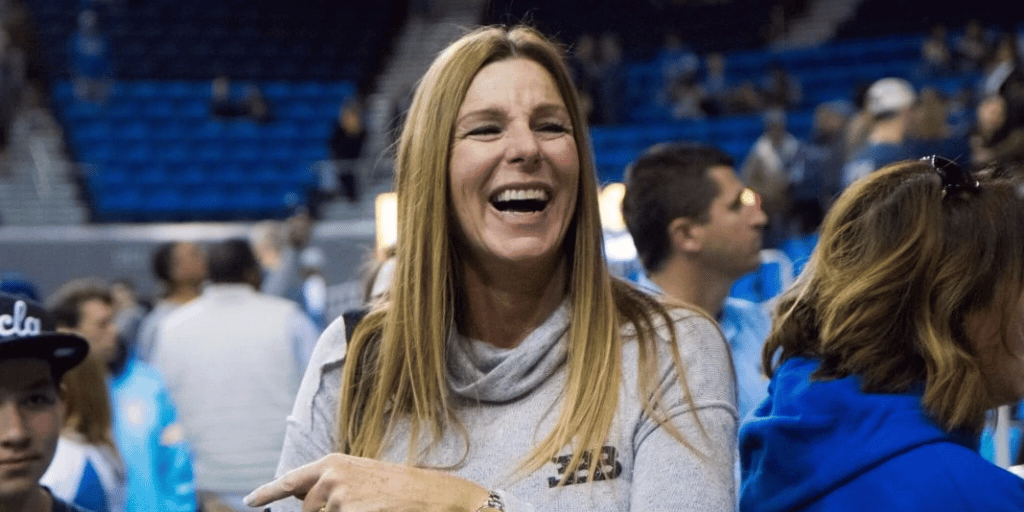 Who is Tina Ball?

Christina Catherine ‘Tina’ Ball (nee Slatinsky) was born in Miami, Florida USA, on 11 December 1967 – her zodiac sign is Sagittarius, and she holds American nationality. She’s a former basketball player for the Cal State Los Angeles Golden Eagles, but also known for being the wife of the former football player LaVar Ball, and the mother of the NBA (National Basketball Association) star Lonzo Ball.

Tina was born to Robert and Catherine Slatinksy, and grew up in Miami. She was a very active child, who started participating in sports at an early age. Aged 15, Tina moved across the country to Alta Loma, California where she enrolled at Alta Loma High School, played basketball for their team, and already made a name for herself, being a four-year varsity winner.

After matriculating in 1985, she enrolled at the California State University, Los Angeles, where she continued her basketball career.

Career as a basketball player and other ventures

Tina was one of the best-performing basketball players in her high school team, and was an All-Baseline League pick as a senior, averaging 15.8 points and 18.2 rebounds per game. She continued with strong stats during her college career, ranking eighth in points (935), eighth in field goals made (541), and fifth in field goal attempts (1165).

Despite her talent for basketball, Tina didn’t play professionally after graduating college, but instead opted for a career in education. She has now worked as the athletic director at Vernon Middle School in Montclair, California for more than 24 years.

Since August 2017, she’s been starring in the Facebook Watch reality TV show “Ball in the Family”, alongside her husband LaVar and their three sons. The series has been met with a warm reception from critics and viewers alike; the premiere episode was watched by more than 26 million people, while the critics have praised the series for its authenticity.

Tina and LaVar first met during their time in college. According to LaVar, he took a liking to Tina the first day at California State: ‘I transferred from Washington State and saw her in the hall. Wow. She knocked me off my feet. I stopped her in the hall and said: ‘I don’t know what we’re going to do together, but we’re gonna do something.’’, he revealed in an interview.

The two married in 1996, and in the following year welcomed their first son, Lonzo. In 1998, Tina gave birth to their second son LiAngelo, while their youngest child, LaMelo Ball, was born in 2001. All three boys have followed in their mother’s footsteps, becoming basketball players – Lonzo is currently a point guard for the Chicago Bulls, LiAngelo plays for the Grand Rapids Drive, while LaMelo is a member of Charlotte Hornets.

On 21 February 2017, Tina suffered a stroke which drastically changed her life. She has since been dealing with aphasia, which affects her ability to speak. As documented on the reality show “Ball in the Family”, Tina has been actively working on improving her health, and to make a full recovery.

‘But she’s strong, she’s getting back. She rehabs five times a week.’, her son Lonzo said in a recent interview he gave for the news outlet “USA Today”.

As of February 2022, her net worth has been estimated at more than $1.5 million.

Anderson ‘Lonzo’ Ball was born in Los Angeles, California, on 27 October 1997 – his zodiac sign is Scorpio, and he holds American nationality. He’s a professional basketball player for the Chicago Bulls of the NBA.

Lonzo and his two younger brothers grew up in suburban Los Angeles.

He started playing basketball at a young age, guided by his parents who both had successful careers in sports. During his time in Chino Hills High School, Lonzo was rewarded with multiple national school player of the year honors, and led his team to an undefeated record and a national championship.

In 2016, he enrolled at the University of California, Los Angeles, subsequently breaking the university’s basketball record for most assists in a year, during his freshman year. He also won the 2016 Wayman Tisadale Award as the top freshman of the US. This led Lonzo to be selected the second overall pick of the 2017 NBA draft, by the Los Angeles Lakers. During the 2017 NBA Summer League in Las Vegas, Nevada he earned the title of the league MVP (Most Valuable Player), averaging 16.3 points and 9.3 assists per game, including two triple-doubles.

Unfortunately, Lonzo had to miss 30 out of 82 games during his rookie NBA year, due to knee and shoulder injuries. On 17 July 2018, he underwent arthroscopic surgery on his knee to repair the injury. However, after he recovered, the focus at the LA Lakers shifted to LeBron James who was signed during the offseason. Lonzo still played all of the first 47 games of the season for the LA Lakers, but ended up injured again, and was advised by his doctors to undergo another operation to treat the injured ankle. In February, he went to Ohio to have his procedure, but as it wasn’t authorized by his team, he was shut down for the rest of the season.

On 6 July 2019, Lonzo signed with the New Orleans Pelicans, making his debut on 22 October, and during his first season with the new team, he averaged 12.7 points, 7.3 assists and 6.7 rebounds. Heading into the next season, the Pelicans coach moved Lonzo to a 3-and-D role, which he had never played before. The risk apparently paid off, as he scored a then career-high and a season-high of 27 points in the 131-126 win against Busks. However, as the season progressed, his assist average dropped to 5.3, and Lonzo became a restricted free agent during the offseason.

In August 2021, he was traded to the Chicago Bulls in a sign-and-trade deal, and ironically in October the same year, he scored a triple-double in a 128-112 win against the Pelicans. In January 2022, it was announced that Lonzo would have to miss up to eight weeks, due to a knee injury.

Aside from basketball, the NBA star has ventured into business, launching his own shoe line in 2017. He is also a hip-hop music enthusiast, writing music in his spare time, and has released several singles, including “Melo Ball 1” and “Super Saiyan” in 2017, and a full-length album “Born 2 Ball”.

Lonzo has participated as a contestant, alongside his father LaVar, in an episode of the Comedy Central show “Lip Sync Battle”. In 2020, we saw him compete in the fourth season of the competition singing reality show “The Masked Singer”, under the name ‘Whatchamacallit’; he was eliminated in the eighth episode.

Lonzo has been in a relationship with Denise Garcia since their time in high school. In March 2021, the two welcomed their daughter, Zoey Christina.

As of February 2022, his net worth has been estimated at more than $12 million.