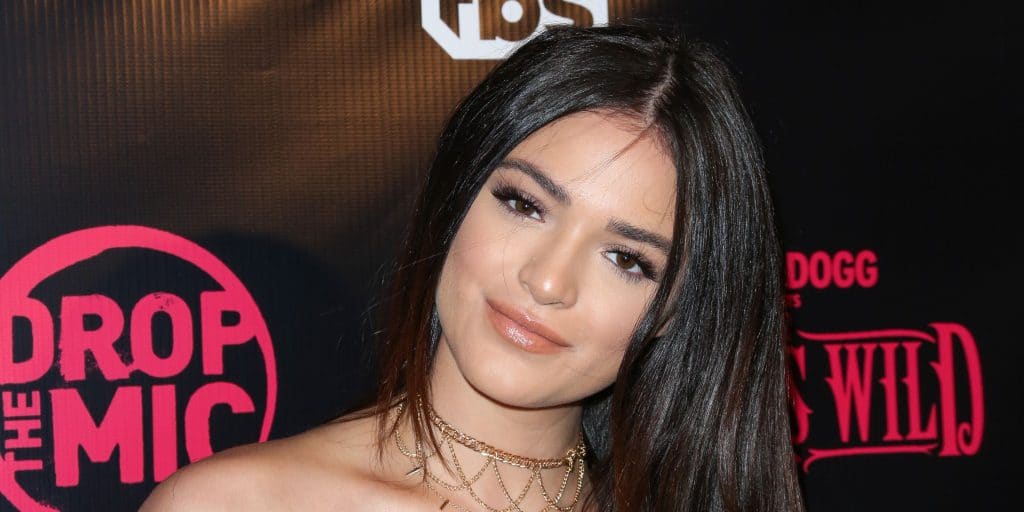 Who is Luna Blaise?

Luna Blaise Boyd was born under the zodiac sign of Libra on 1 October 2001, in Los Angeles, California USA; she holds American nationality, and her ethnicity is of mixed Scottish, Jewish and Mexican descent. She is a singer, and an actress with 14 credits to her name, perhaps known best for her role as Nicole on the American Broadcasting Company (ABC) television series “Fresh Off the Boat”, which brought her the Young Artist Award, Best Performance in a TV Series – Recurring Young Actress (14 – 21).

Luna was raised in Los Angeles by her parents Paul Boyd and Angelyna Martinez; Paul is a feature film, commercial and music videos director from Scotland, who has directed commercials for famous brands such as Revlon, L’Oreal, Dodge, and Jaguar, and he also directed music videos for popular singers such as Bryan Adams, Sting, Tina Turner, and many others. Her mother, Angelyna is an actress and talent manager.

Luna attended a local high school, and upon matriculating in 2019, enrolled at a private university in California, and she’s still a student.

Luna started acting at age of five, doing commercials for brands such as Kentucky Fried Chicken (KFC), McDonald’s, Target, Juicy Couture, and Gap, followed by her acting debut on the big screen, in the movie “Konflooent”, in 2008.

She made her appearance as Chloe in the 2009 movie “Vicious Circle” ,written and directed by her father Paul Boyd, which is a drama about a young artist who comes to New York City to fulfill his dream of creating comic books, where he meets a rebellious teenage singer and they fall in love, although some secrets haven’t been revealed, and the young girl might be in life threatening danger; the movie won two awards.

In the following years, Luna was cast to play Loonz in the movie “The Breakdown”, and in the 2015 movie “Memoria” she portrayed Young Nina, acting alongside James Franco, Thomas Mann, and Sam Dillon in this biographic drama about Ivan Cohen, written and directed by Vladimir de Fontenay and Nina Ljeti.

Luna portrayed Eileen in the short movie “Surviving Theater 9”, before she was cast to play Nicole in the series “Fresh Off the Boat” a comedy drama about the life of a Taiwanese family in the USA during the ’90s, which had 28 award nominations and won six. Luna was nominated for Young Entertainer Award Best Recurring Young Actress 13-15 – Television Series.

Her most recent role as Olive Stone was in the National Broadcasting Company (NBC) series “Manifest”, which is a mystery science-fiction drama starring Josh Dallas, J. R. Ramirez, and Melisa Roxburgh; the series has had four award nominations, and won one.

Luna’s fans will be happy to hear that she’s acting in four movies, entitled “Detach”, We Are Gathered Here Today”, “Deltopia”, and “Aristotle and Dante Discover the Secrets of the Universe”, which are at the moment in the post-production, and should be released soon.

Luna launched her self-titled YouTube channel on 2 July 2016, has gained over 55,000 subscribers, and uploaded her three singles “Secrets”, “Camera Roll”, and “Over You” – all of her videos combined have been viewed over 1.4 million times. She wrote the lyrics for the songs, and independently released all three singles.

There were various rumors about Luna’s love life, and one of them was that she was dating Jacob Sartorius, an American singer and social media star, perhaps known best for his TikTok videos which have over 1.6 billion likes – his account is followed by almost 24 million fans. Luna and Jacob haven’t spoken about these assumptions, but Jacob started dating an actress Millie Bobby Brown, thus the rumors ended.

The new rumors began when Luna was seen at the “Gay & Lesbian Alliance Against Defamation (GLAAD) Media Awards” event with Ricky Garcia, an American actor and singer, perhaps known best for his role as Monks in the movie “Finding ‘Ohana”. However, neither Luna nor Ricky spoke about any relationship, and Ricky was spotted with model Beatrice Vendramin after a while, so it’s assumed that Luna and Ricky are just close friends.

Another rumor about Luna was that she might be a lesbian, since she has some photos on her Instagram featuring her and a certain girl whose name she hasn’t revealed, together on the trip to Paris, France. In the pictures they seem very close to each other, however, Luna hasn’t spoken about her sexual orientation and her relationship with this girl, only once stating: ‘love has no labels – period’.

As of November 2021, Luna seems to be single, and hasn’t been married or engaged.

Besides acting and singing, Luna is a talented dancer – she studied Russian ballet for 10 years; she also likes swimming, and enjoyed this summer on the island of Mykonos, Greece.

She is into traveling, and thanks to her career has visited a couple of US states, and for the pleasure, as we already mentioned she traveled to France, Greece and a few other European countries, however, her favorite travel destination is New York City, and she dreams of visiting Cairo, Egypt.

In her spare time she likes to read books – her favorite writer is Samuel Beckett and his play “Waiting for Godot”.

She also likes to watch movies, and a couple of her favorites are “Schindler’s List”, “Catch Me If You Can”, “The Shape of Water”, and “First They Killed My Father”. The directors of these movies – Steven Spielberg, Guillermo Del Toro, and Angelina Jolie – are Luna’s idols; she wants to direct and produce movies one day, and that is her future occupation, or at least she has her goals set in that direction.