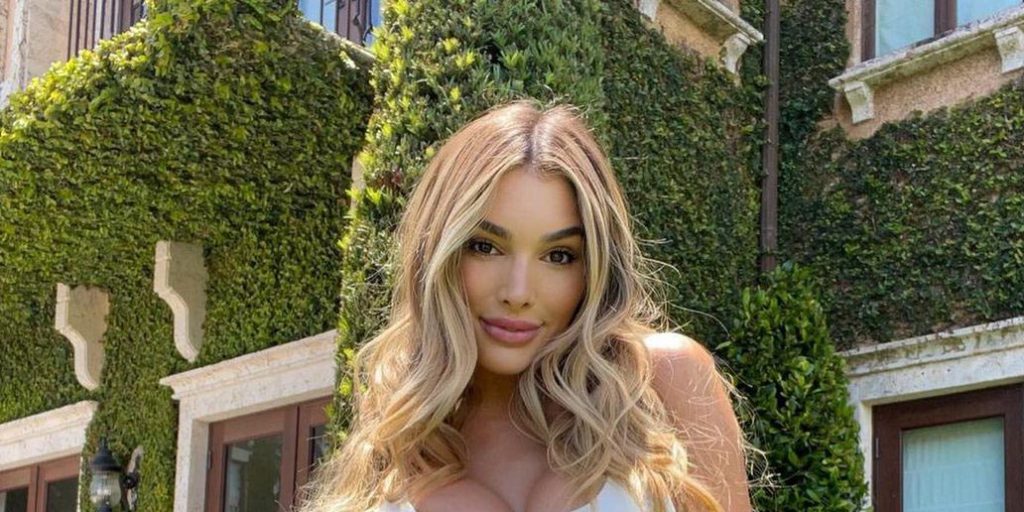 Lyna Perez was born in Miami, Florida, under the Scorpio zodiac sign on 4 November 1992, which makes her 29 years old as of 2021. She hasn’t shared any details regarding her parents, except that they’re American of Caucasian ethnicity, as is she. Ever since she was a child, Perez has had a knack for modelling, and when she was 14 years old, her classmate introduced her to photoshoots, and constantly asked her to accompany her to the beach, where they took photos for their photography projects.

Lyna might have attended a local high school; she hasn’t revealed whether she went to college or not.

The Miami-born model is a fitness fanatic, who revealed that she prefers exercising in a park or at her home, as opposed to going to the gym.

She admitted during an interview that she likes eating, and regrets that her modelling career comes with dietary restrictions; her favourite food is pizza.

Lyna’s friend encouraged her to try out modelling, after going for several photography projects together when she was 14 years old. As a result, she created an Instagram account – at that time, Instagram was steadily becoming a popular platform for aspiring models and influencers, and companies were hiring such personalities to upload sponsored posts on their pages. When she turned 18, she decided to pursue modelling as a full-time job, and became more involved in working out to improve her figure, so sending her photos to independent websites. She launched an official Instagram account, and by 2013 had garnered more than 70,000 followers.

Most of her photos had gone viral and several clothing brands and talent agencies soon started taking notice of her.

In 2015, she began receiving sponsorship offers, and her first contract was with BOUTINE LA, which is a highly regarded and independent bikini brand situated in Los Angeles, California. She was paid handsomely, and also enjoyed unlimited amounts of her favoured clothing items. Subsequently, she began working with Dreamstate, a very famous photographer (who has kept his true name hidden), popular for photographing some of the most popular supermodels, and she learnt a lot from him.

She began a long-term career relationship with Aaron Riveroll in 2016 – Aaron is a famous, skilled photographer who is widely followed on Instagram by over 500,000 fans. She has been co-operating with him up to date, and he shoots most of her pictures.

Rise to Stardom: Partnership with Playboy and Nipple Slip Scandal

2017 saw Perez become very active on Instagram, reaching the million followers milestone. Due to her rising fame, Playboy executives noticed her, and she was selected to feature in their men’s magazine. She was seen in Playboy Mexico’s “Insta Girls” section, which was their Latin-American publication featuring new-age models and influencers who had become famous through their social media platforms.

She participated in several sensual photoshoots, including photographed on a bed with neat satin sheets which showcased her curves perfectly. She developed a more diverse fan-base after working with Playboy.

Lyna started featuring on tabloid websites constantly, as her fame was rising, but in July 2017 she was the subject of controversy following a ‘mishap’ that had happened as she was making a live video on Instagram with the model Juliane Klaren. Her vest top accidentally slipped during the live recording and exposed her left nipple – fans who were watching then sent the clip viral. Although she came out saying that it was an accident, most of her followers saw it as a stunt meant to increase her following on the platform.

In 2018, Fashion Nova, an accessory and clothing brand that deals with luxury items, selected Perez to be one of their brand ambassadors. She was seen wearing their bikinis, lingerie and dresses on Instagram. She also started working with Honey Birdette, a high-end lingerie brand, during the same year; the firm has recently began producing sex toys, and has become very successful. In 2019, she partnered with Bikini Block, which specializes in bikinis, with most of their products are sport-oriented. Interestingly, Bikini Block’s products are designed by women, with all the firm’s shares also owned by females, and since Perez is a self-proclaimed feminist, she came in as the best candidate to market their products.

Perez has used her online fame to expand her influence, as well as engage with millions of avid fans all over the globe. Her favourite social media platform is Instagram, on which she has more than four million followers. She is also active on Twitter with close to 150, 000 fans, but recently deactivated her Facebook page for unknown reasons.

Perez is a very secretive socialite who doesn’t publicly speak about her love life. She hasn’t introduced anyone as her boyfriend on the internet, however, she once shared a picture of herself with a mysterious man on her Instagram page, and there were speculations that he was her boyfriend.

She hasn’t confirmed the rumors yet, and didn’t reveal his name; however, many people stated that the man was Motar2k (his real name wasn’t disclosed), who is fond of donating to the needy and has gained popularity due to his philanthropic efforts.

There are rumors on the internet that Lyna might have gone for a surgical procedure to improve her breasts, ie make them look bigger. She addressed these rumors, saying that she enhanced her breasts at the age of 22. She has no problem revealing this, and has been heard talking about her surgical procedures on a couple of occasions.

Lyna has light brown eyes and long blond hair. She has maintained an hourglass figure as a result of her workout routine and healthy dietary restrictions; she’s 5ft 4ins (1.66m) tall, weighs approximately 120lbs (55kgs) with vital statistics of 34-22-34, and wears dress size 2 (US).

Perez has accumulated her net worth through her contracts with various high-end brands such as Fashion Nova, through her Instagram activities, numerous photoshoots, and a couple of appearances in gossip websites and tabloids.