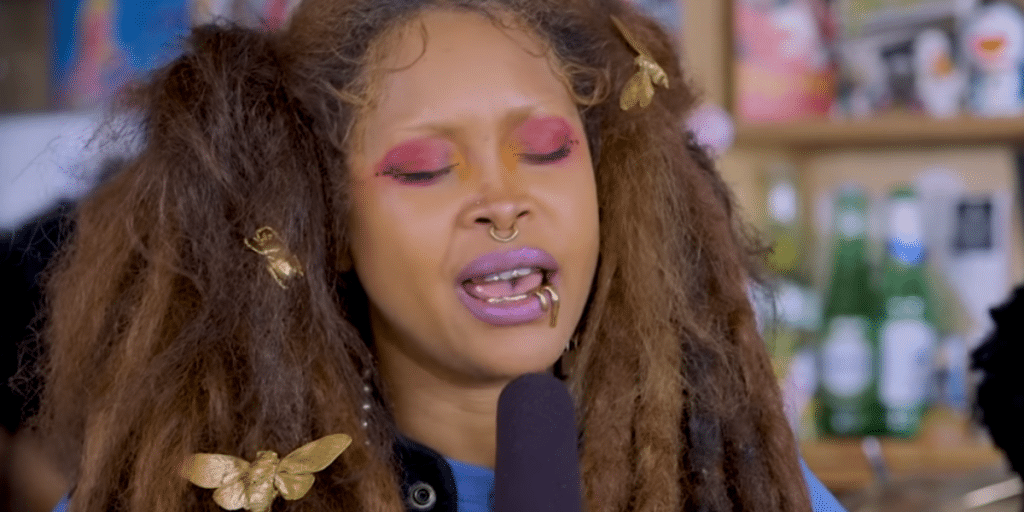 Puma Sabti Curry was born on 5 July 2004 under the zodiac sign of Cancer, in Dallas, Texas USA; she holds American nationality and her ethnicity is African-American. She is a singer, actress, and social media star, perhaps known best as the daughter of famous singer-songwriter Erykah Badu and rapper The D. O. C.

Her father is The D. O. C, her mother’s ex-boyfriend, whom she has dated back in the early 2000s; although her parents broke up, Puma spends quality time with her father, and he often shares photos of their adventures.

Puma attended a local middle school, and is currently a high school student, where she sings in a school choir and is also a member of the drama club.

She is active on social media platforms, such as Instagram, Snapchat, and TikTok, on which she interacts with her fans, and posts various photos and videos featuring her singing, acting and posing in amazing clothing combinations.

Her Instagram account has been followed by nearly 150,000 people, while her TikTok profile has gained over 550,000 followers, and all of her videos combined have amassed over 12 million likes; her fans can find her on Snapchat under the name ‘puma_wright’.

From an early age, Puma has been dreaming of becoming a famous singer just like her mother; she started singing when she was four, and it was clear that she’s inherited her mother’s talent.

She’s posted numerous covers of popular singers on her social media platforms, however, the most viewed and commented by the public was her cover of Alicia Keys’ song “If I Ain’t Got You”, which she posted on her TikTok on 22 April 2021.

Puma announced that she will release her debut album in the near future, and shared a snippet of her song on 19 December 2021 on her TikTok, which provoked a large number of comments by her followers, saying that they can’t wait to hear the whole album.

Speaking of her love life, it seems that she’s in a relationship with, for now, a mysterious boy, who can be seen on her photos posted on her Instagram account; she hasn’t disclosed his name, but it’s clear that she is enjoying skiing with him at Keystone, Colorado.

This young talented singer is 17 years old, she has long, curly, dark brown hair and astonishing green eyes; she weighs around 105lbs (48kgs) and is 5ft 4ins (1.62m) tall.

As of late 2021, her net worth can’t be estimated as there’s no information about her earnings, but her mother’s wealth has been estimated at $10 million, and her father’s at $2 million.

Who is Erykah Badu?

Erykah Badu was born as Erica Abi Wright under the zodiac sign of Pisces on 26 February 1971, in Dallas, Texas USA; she holds American nationality and her ethnicity is African-American. She’s an actress, singer-songwriter and record producer, perhaps known best for her hit songs “Next Lifetime”, “On & On”, “Appletree”, and “Otherside of the Game”, among others.

Erykah was raised in Dallas alongside her brother and sister by their single-mother; she attended Booker T. Washington High School for the Performing and Visual Arts, and upon matriculating in 1989, enrolled at Grambling State University. She didn’t graduate, since she left the college in 1993 to pursue her singing career.

As an actress, she made appearances in the movies “The Cider House Rules”, “Blues Brothers 2000”, and “House of D.”, and has also appeared in two documentaries – “The Black Power Mixtape 1967-1975” and “Before the Music Dies”. Erykah was compared to famous jazz singer Billie Holiday; because of her voice she was named the ‘Queen of neo soul’, which is a music genre that emerged from R&B and soul music.

Some rumors say that the two might be engaged – according to her post on Instagram they were wearing matching rings on their hands, however, they haven’t confirmed this assumption.

The D. O. C was born as Tracy Lynn Curry under the zodiac sign of Gemini on 10 June 1968, in West Dallas; he holds American nationality and his ethnicity is African-American.

He’s a record producer, songwriter and rapper, who’s perhaps known best for his studio albums “No One Can Do It Better”, “Helter Skelter”, and “Deuce”.

He is also known for his collaborations with Dr. Dre, Snoop Dogg, Eazy-E, MC Breed, and N. W. A; he started his music career with a hip-hop group Fila Fresh Crew.

The D. O. C was in a relationship with Puma’s mother for a couple of years, but although they separated, The D. O. C stayed in his daughter’s life, and Erykah and he are now good friends, who are proud of their daughter.