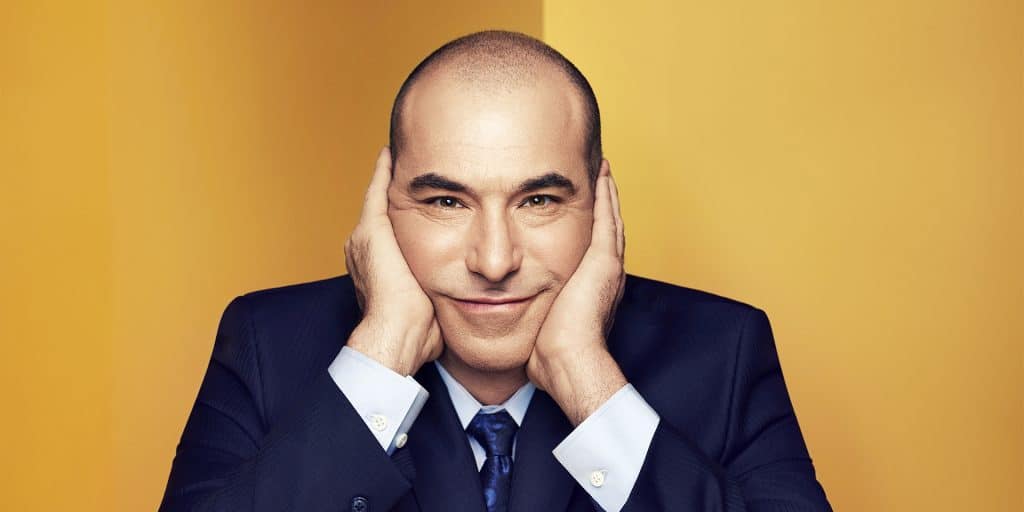 Who is Rick Hoffman?

Richard Edward Hoffman was born in New York City, USA on 12 June 1970 – his zodiac sign is Gemini, and he holds American nationality. He’s an actor with more than 60 credits to his name, while he’s perhaps known best for his portrayal of Louis Litt in the critically acclaimed comedy series “Suits”. It was created by Aaron Korsh, starred Gabriel Macht, Patrick J. Adams and Meghan Markle, and follows the college dropout Mike Ross who has partnered up with Harvey Specter, one of the best attorneys in New York City. The series aired from 2011 to 2019, but won just one of the 10 awards for which it was nominated.

Rick was raised in Roslyn Heights, New York State alongside his brother Jeff, by their Jewish parents Charlie and Gail; nothing else is known about Rick’s family, as he respects their privacy.

He became interested in acting while attending The Wheatley School, and appeared in many plays performed at the school, but also at a local theatre. Rick matriculated in 1988, and then enrolled at the University of Arizona, while he launched his acting career in 1990, with his portrayal of Mugger in the family comedy movie “Just Perfect”.

He graduated with a Bachelor of Arts degree in 1992, and then moved to Los Angeles, California to pursue his career; Rick spent the following four years appearing solely in theatre plays, but also worked as a waiter to financially support himself.

Rick made his debut TV series appearance in the 1996 episode “Ferbus’ Day Out” of the action adventure comedy “Masked Rider”, and the remainder of the ‘90s saw him make a guest appearance in a couple of popular series, such as the comedy “Alright Already”, mystery science fiction drama “The Pretender”, and the action crime comedy “V. I. P.”

He gained recognition in 2000, when cast to star as Freddie Sacker in the drama “The $treet”, created by Darren Star and Jeff Rake, and which also starred Tom Everett Scott and Nina Garbiras; the series follows a group of people who are working at a Wall Street trading company.

In 2001 and 2002, Rick played Terry Loomis in all 22 episodes of the drama “Philly”, and the following a couple of years saw him star in an episode or two of the mystery crime drama “Without a Trace”, another mystery crime drama “The Practice” and the crime comedy drama “Monk”.

Between 2007 and 2009, he starred as Chase Chapman in the romantic mystery comedy “Samantha Who?”, created by Cecelia Ahern and Donald Todd, and which also starred Christina Applegate and Jennifer Esposito. It follows a woman who’s suffering from amnesia, and the series won six awards, including a Primetime Emmy, and was nominated for 18 other awards.

In 2010, Rick appeared in an episode of five series, including the mystery crime dramas “Numb3rs” and “The Mentalist”, and the action crime drama “Dark Blue”. Between 2012 and 2014, he played Louis Litt in the “Suits” spin-off “Suits Webisodes”, while Rick’s most recent role in a TV series has been his portrayal of Doctor Swerlow in the 2021 episodes “Implosion” and “Liberty” of the drama “Billions”.

In 1997, Rick appeared in the action mystery thriller “Conspiracy Theory”, which starred Mel Gibson and Julia Roberts, and a couple of his other movie roles in the ’90s were in the 1997 comedy “The Fanatics”, themystery crime drama “Johnny Skidmarks” and the action crime thriller “Lethal Weapon 4” both in 1998.

In 2003, Rick was cast to play Louis in the mystery drama “I Love Your Work”, written and directed by Adam Goldberg, and which starred Marisa Coughlan, Judy Greer and Shalom Harlow. The movie follows the actor Gray Evans who’s going through a hard time with his wife, is close to a mental breakdown, and has fallen for a young film student.

Rick then had supporting roles in the 2004 action science fiction adventure “The Day After Tomorrow”, which starred Dennis Quaid and Jake Gyllenhaal, and in 2004 the action crime thriller “Cellular” and the drama “Paradise”.

He played ‘Goldy’ Goldman in the 2007 action crime thriller “The Condemned”, written and directed by Scott Wiper, and which starred Steven Austin, Vinnie Jones and Nathan Jones; the film follows nine people who are to be executed for their crimes, but have now been taken to a desolate island where they have to fight to the death, with the last man standing winning his freedom; it won a 2007 Casting Society of America Artios Award nomination for Best Feature Action/Horror Casting (Tom McSweeney).

Rick has since been focused on winning roles in TV series, and has appeared in only a single movie: the 2014 thriller “Locker 13”.

He worked as a military technical advisor on the 2012 science fiction adventure movie “Battleship”.

Rick has been featured in a couple of documentaries, including the 2006 video “Hostel Dissected”, and the 2006 mini-series “30 Even Scarier Movie Moments”.

He has made a guest appearance in various talk-shows, such as “Tom Green’s House Tonight”, “Red Carpet Report”, and “The AM Show”.

Rick is highly secretive when it comes to sharing the details of his love life with his fans, and hasn’t spoken of any women or men whom he has perhaps been with. This is why there are various rumors circulating the internet concerning both his current relationship status, and his sexual orientation.

It’s widely known that Rick has a son who was born in December 2014, but the identity of the boy’s mother remains undisclosed. Some believe that Rick was in a relationship with the woman, while other’s claim that the boy’s adopted, and that Rick is actually gay.

Many of his fans think that being gay is the reason why Rick hasn’t mentioned any women whom he’s dated, but this hasn’t been confirmed.

Rick loves animals, but has revealed that he’s allergic to cats.

He’s passionate about travelling, and his acting career has taken him to various US states, as well as to European, African and Asian countries; Rick’s dream travel destination is Paris in France.

He enjoys being active on Instagram, and is today followed by over a million people, while he’s uploaded more than 200 pictures onto the network; most taken during Rick’s everyday life.

He has his own favorite actors and actresses, some of whom are Bryan Cranston, Jim Carrey and Natalie Portman, while his favorite series is “Breaking Bad”, and his favorite movies “Ace Ventura: Pet Detective – When Nature Calls” and “Leon: The Professional”.

Rick was there at the St George’s Chapel when Prince Harry married Meghan Markle, and the camera caught him with a rather unimpressed look on his face, which has since become a meme, and Rick has been asked on a number of occasions what it was all about, and if the ceremony was that bad.

As is turns out (according to Rick), a man who was sitting next to him had bad breath, thus his ‘weird’ face in the picture.

As of February 2022, his net worth has been estimated at over $1 million.