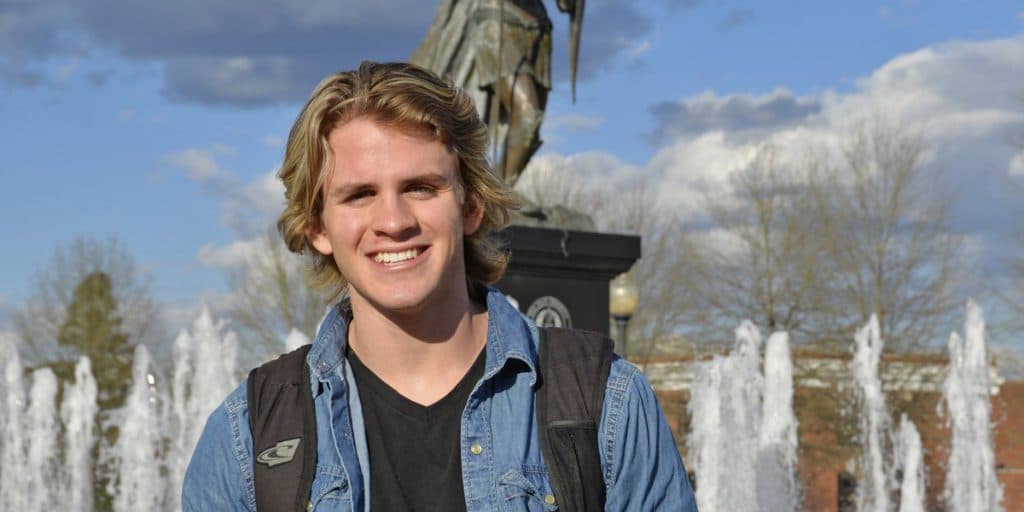 Who is Cole LaBrant?

Cole LaBrant was born in Troy, Alabama USA, on 21 August 1996 – his zodiac sign is Leo, and he holds American nationality. He’s a YouTuber, social media star and an actor, who’s probably known best for his and his wife’s YouTube channel “The LaBrant Fam”, which Cole launched on 24 August 2012 for himself, and renamed it to what it’s called today after marrying. It’s subscribed to be more than 13 million people, and numbers close to five billion views of all their videos combined, most of which feature the LaBrant family talking about their everyday lives, and taking part in various activities together.

Cole was raised in Troy alongside his brothers Luke, Jack, Clay and Tate, and their sister Lily, by their parents Ken and Sheri; not a lot is known about Cole’s family, as he respects their privacy, but it’s known that they are all deeply religious Christians.

Cole grew up being interested in sports, and started playing soccer when he was still attending a local elementary school. His interest only grew stronger once he enrolled at a local high school, however, after learning about the careers which people had launched for themselves on social media networks, he chose to give it a go, as well.

Cole matriculated in 2014, and then didn’t pursue a college degree, but focused on making a name for himself on the internet.

The LaBrant family are mostly popular on YouTube for being very open with their fans, and sharing nearly all the details of their private lives with them. We are going to mention three of their most popular YouTube videos, which have helped them attract many subscribers.

Their #1 video “4 YEAR OLD GIRL AND DADDY DO CUTEST CARPOOL KARAOKE EVER!!!” has been watched over 100 million times since 22 June 2017, and features Cole and his daughter singing together in a car.

Their second most popular video “GETTING STUCK ON A WATERPARK RIDE!!!” has been viewed over 50 million times since 16 September 2017, and shows the LaBrant family having fun at a waterpark.

Number three on the popularity list is “OUR WEDDING VIDEO!!! *Vows to 4 year old daughter*”, watched close to 50 million times since 16 July 2017, and which tells the story of Cole and Savannah’s wedding, and how Cole wrote vows to both Savannah, and her daughter from a former relationship.

Cole launched his career on the internet after he became popular on the now-defunct social media network Vine, which was used for uploading six-second long lip syncing videos; he was a member of the Vine channel Dem White Boyz, and they were a huge internet sensation.

Cole then became popular on Instagram, and he’s today followed by close to five million people, and has uploaded nearly 500 pictures onto the network, most of which feature him spending time with his wife and their children.

He launched his Twitter account in January 2019, and is today followed by close to 10,000 people, although Cole has tweeted only about 20 time, mostly announcing the upload of his new YouTube videos.

Cole is also active on Facebook, and is today followed by more than two million fans, while he tends to update it at least once a week.

He’s a TikTok star too, as his account’s today followed by more than 20 million people, while he’s amassed close to 500 million likes of all his videos combined, mostly featuring himself spending time with his wife and their kids.

Cole has three acting credits. In 2015, he appeared in the episode “Sweet Justice” of the musical comedy series “Sanders Shorts”, which stars Thomas Sanders, Dominic Goldberg and Joan S, and follows Thomas and his friends as they’re trying to entertain their fans; the series has been airing since 2013, and numbers over 2,000 episodes.

Cole voiced Triceratops in the 2017 episode “The Lost Orphans” of the animated series “Sadie and Emmie”, which follows a brave and a cowardly dog, who are trying to save their owners from evil monsters; the series has been airing since 2015, and has won five of the six awards for which it’s been nominated.

Cole’s only other role has been in the 2017 short action film “Jurassic World: Fallen Kingdom – The Trailer Rescue”.

Cole competed in the family adventure game-show “The Amazing Race” in 2016; it features several teams who have to travel around the globe, with the first one to reach their goal winning $1 million.

He has made a guest appearance in several talk-shows, including “Dhar Mann” and “Brent Rivera”.

Cole met his now-wife Savannah in 2016 – she told him during their first date that she has a daughter named Everleigh Rose Soutas from a previous relationship, who was born on 14 December 2012; Cole didn’t seem to mind about this, neither about the fact that Savannah is three years his senior, as she was born on 2 March 1993.

They married in July 2017, in a private ceremony attended by their closest friends and family members, and on 28 December 2018, Savannah gave birth to their daughter Posie Rayne.

On 29 July 2020, their son Zealand Cole was born, while she’s recently revealed on YouTube that she’s pregnant again.

Cole hasn’t spoken of any other women whom he has perhaps been with, and as of November 2021, he’s married to Savannah, and has two children with her, while he’s a step-father to her daughter from a previous relationship.

Cole is physically highly active, and has five to six training sessions at the gym each week; some of his fans believe that he’s working out only because it’s important for his image on the internet.

He’s a fan of tattoos, and has several.

Cole goes to church at least once a week.

He likes to do cosplay together with his wife, and they don’t usually skip on an opportunity to put on a costume and attend a Halloween party.

Summer is his favorite season, as he enjoys sun tanning at the beach, swimming in the ocean and playing beach soccer and volleyball.

Late at night, Cole enjoys watching movies starring his favorite actor and actress, Tom Hanks and Julia Roberts, such as “The Terminal”, “Sleepless in Seattle” and “The Runaway Bride”.

As of November 2021, he and his wife’s net worth has been estimated at over $12 million.