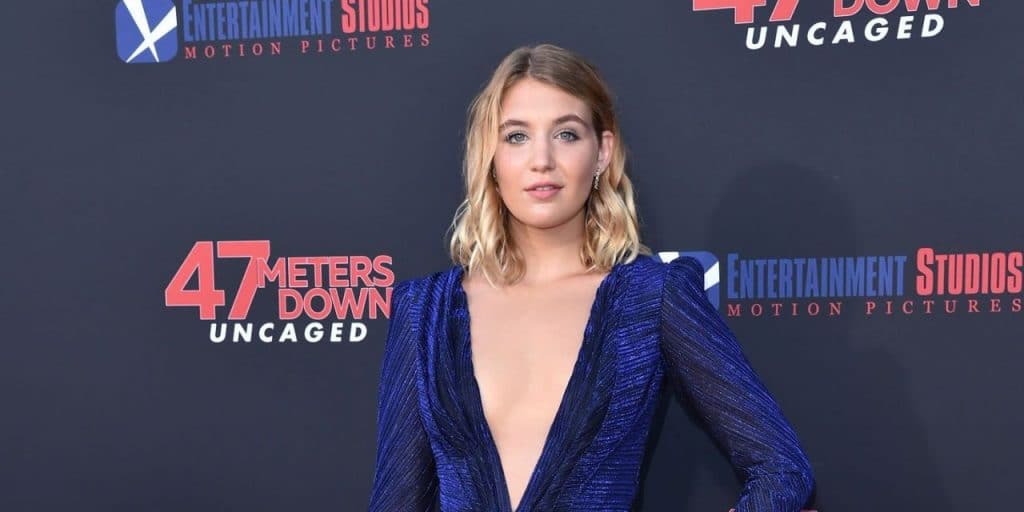 Who is Sophie Nélisse?

Sophie Nélisse was born in Windsor, Quebec, Canada, on 27 March 2000 – her zodiac sign is Aries, and she holds Canadian nationality. She’s an actress, perhaps known best for her roles in critically-acclaimed movies such as “The Book Thief”, “Bohemian Rhapsody” and “Monsieur Lazhar”.

Sophie is of French-Canadian and Puerto Rican descent. She has an older brother named Vincent, and a younger sister named Isabelle, who is also an actress. Sophie grew up in Montreal, Quebec, as she moved there with her family at the age of four. As a teenager, she played gymnastics and participated in national competitions, but quit after being cast in “The Book Thief”, as she wanted to focus on her acting career.

Her mother worked as a high school teacher, before quitting her job in 2013 to act as a talent manager for Sophie and Isabelle. Sophie is currently studying film at university.

Sophie made her TV series debut in 2010, when she appeared in an episode of the French-Canadian legal drama “Mirador”, and then went on to appear in three episodes of the crime drama “Toute la Vérité”.

In the following year, she played the recurring character Zoé in the fourth season of the sitcom “The Parent Family”, which starred Anne Dorval and Joe Scarpellino. In 2012, Sophie had a supporting role in the award-winning drama mini-series “Vertige”, centered on a teenage girl who spent three months in a coma after falling from the rooftop of a skateboarding center.

After a long break from working on TV series, in 2018 she appeared in four episodes of the sports-themed drama about a junior hockey team, entitled “Demain Des Hommes”, which starred Alexandre Bourgeois, Catherine De Léan and Treveor Momesso.

In 2021, Sophie made her debut in an American TV series, playing the role of young Shauna in Showtime’s mystery horror drama “Yellowjackets”. The series was created by Ashley Lyke and Bart Nickerson, and stars Melanie Lynskey, Tawny Cypress and Ella Purnell. It centers on a group of teenagers who miraculously survive a ‘plane crash deep in the Canadian wilderness, and the lives they’ve built 25 years later.

Sophie made her film debut in the 2011 comedy drama “Monsieur Lazhar”, based on an eponymous stage play centered on an Algerian immigrant professor, who must help his students deal with grief after their previous teacher committed suicide in the classroom.

The movie premiered at the Locarno International Film Festival, winning the Audience Award, along with the Variety Piazza Grande Award, and was later nominated for the 84th Oscar for the Best Foreign Film.
In the following year, Sophie played the leading role of Liesel Meminger in the wartime drama “The Book Thief”, directed by Brian Percival and based on the eponymous bestselling novel by Markus Zusak. The film centers on a young girl living in Nazi Germany with her German foster parents, who start stealing books and sharing them with a Jewish refugee.

The casting for the leading actress took several months, and occurred across the world; Sophie was announced for the role on 4 February 2013, while the Australian actor Geoffrey Rush, and the British actress Emily Watson would be playing her foster parents. “The Book Thief” earned high critical acclaim, and was nominated for an Academy Award for the Best Original Score.

In 2014, Sophie played young Joan Fisher in the biographical drama about the chess grandmaster Bobby Fisher, entitled “Pawn Sacrifice”. In the following years, she starred in several critically-acclaimed films, such as “Endorphine”, “Mean Dreams” and “The Great Gilly Hopkins”.

In 2019, Sophie starred in the thriller drama “Close”, written and directed by Vicky Jewson, and which also starred Noomi Rapace, Olivia Jewson and Abdellatif Chaouqi. In the same year, she played the leading role in the adventure horror drama “47 Meters Down: Uncaged”, the sequel to the 2017 horror “47 Meters Down”.

Sophie most recent movie role was in the 2020 mystery comedy drama “The Kid Detective”, in which she played the female lead opposite Adam Brody.

Sophie’s performances in “Monsieur Lazhar” and “The Book Thief” put her on the map as one of the most promising young Canadian actresses.

For her performance in “Monsieur Lazhar”, Sophie was nominated for the 2013 Young Artist Award, and won the 2012 Jutra Award for Best Supporting Actress, along with the 2012 Genie Award in the same category.

For her performance in “The Book Thief”, Sophie was nominated for seven awards, winning the 2014 Young Artist Award for Best Leading Actress in a Feature Film, the 2013 Satellite Award for Breakthrough Performance, and the Spotlight Award at the 2013 Hollywood Film Festival.

From 2017 to 2018, Sophie was in a relationship with the Canadian actor Maxime Gibeault. The two made their first appearance as a couple in a series of photos from their trip in London, England, which Sophie posted on her Instagram.

They were then in an on-and-off relationship for almost two years, before finally parting ways in February 2019.

A few months later, Sophie started dating the photographer and model Clovis Henrard, whom she has been in a relationship with since then. The two had been spotted spending time together in their hometown Montreal, before announcing their relationships on social media.

Sophie hasn’t been married or engaged, and doesn’t have children.

Her favorite movie is “Prisoners”, while her actresses are Kate Winslet, Sarah-Jeanne Labrose and Karine Vanasse.

She’s a very active person, who enjoys outdoor activities such as cycling, hiking and running.

Sophie loves to travel, and has recently been on a trip across Asia, during which she visited Thailand, Vietnam and Indonesia.

She has recently been involved in a UNICEF Canada’s Halloween campaign, which aimed to raise funds for children in impoverished communities in Canada and worldwide.

As of November 2021, her net worth is estimated at already more than $1 million.