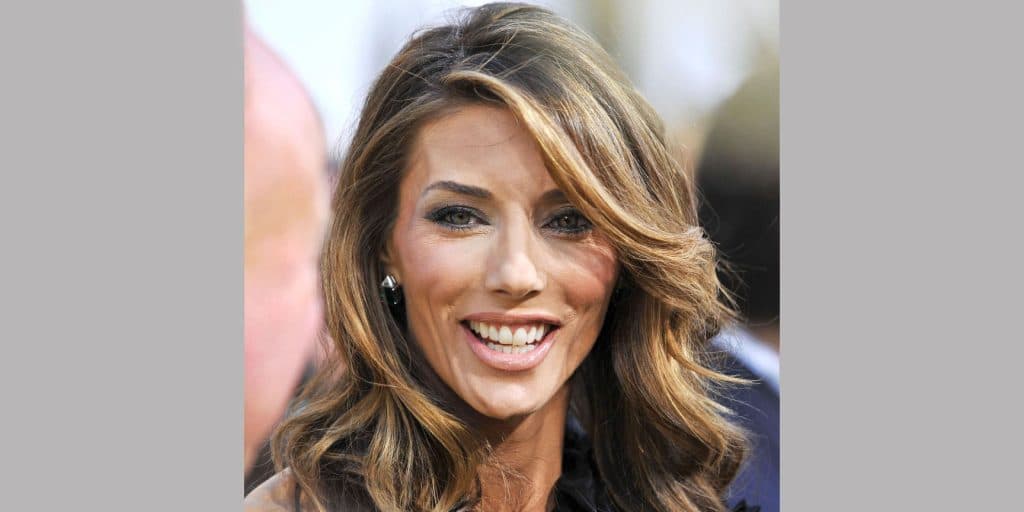 Who is Jennifer Flavin?

Jennifer Flavin Stallone was born on 14 August 1968 under the zodiac sign of Leo, in Los Angeles, California USA. She is a 53-year-old model and currently a businesswoman and entrepreneur, but probably best recognized for being the wife of Hollywood superstar Sylvester Stallone.

How rich is she, as of now? Jennifer Flavin Net Worth

As of late 2021, Jennifer Flavin’s net worth is estimated at over $10 million, acquired through her successful involvement in the beauty and fashion industry. Moreover, it’s assumed that she also enjoys the impressive wealth of her famous husband, Sylvester Stallone, whose fortune is estimated at over $400 million.

Jennifer Flavin spent her early years in West Hills, a neighborhood in the western region of Los Angeles, where she was raised by her father Donald Hugh Flavin, and her mother Shirley Mae Knudsen; her father passed away when she was only 11 years old.

Jennifer Flavin started pursuing her professional career as a model at the age of 19, when she signed with the Elite Modeling Agency. She has modeled for a number of fashion brands and companies, and has also featured in many documentary-style programs, such as “American Gladiator”, “Hollywood Women”, “The Contender”, alongside her husband, and “Good Day Live”, to name a few. Furthermore, she made a brief appearance in the 1990 sports drama film “Rocky V” which starred Sylvester.

Jennifer is also known as a businesswoman and entrepreneur. She is a co-owner of a company called Serious Skin Care established in 2015, that sells cosmetics and beauty treatments through ShopHQ, a home shopping network.

Jennifer Flavin met her future husband Sylvester Stallone at a Beverly Hills restaurant in 1988; they became romantically involved but eventually split. He then went on to date model Janice Dickinson and they became engaged and apparently had a daughter, but later ended their romance after he discovered that he wasn’t her biological father.

Afterwards, he was briefly engaged to model Angie Everhart, before he and Jennifer rekindled their relationship in 1995. They tied the knot on 17 May 1997 at a civil ceremony held at The Dorchester Hotel in London, England, and a chapel ceremony at Blenheim Palace in Oxfordshire. They are now the parents of three daughters – Sophia Roseborn on 27 August 1996, Sistine Rose born on 27 June 1998, who is also an actress and model, while their youngest daughter named Scarlet Rose Stallone, born on 25 May 2002, is also an actress. The family resides in Los Angeles.

Who is her husband? Sylvester Stallone Short Wiki/Bio

Michael Sylvester Gardenzio Stallone was born on 6 July 1946 under the zodiac sign of Cancer, in New York City USA.

He was raised by his father, Francesco ‘Frank’ Stallone Sr., who was a beautician and hairdresser, and his mother Jacqueline ‘Jackie’ Stallone (née Labofish), who worked as a dancer and an astrologer. During his birth, his mother suffered certain complications due to which her obstetricians had to use two pairs of forceps. They accidentally severed a nerve that caused paralysis in parts of Stallone’s face.

Sylvester has a younger brother, Frank Stallone, who is a well-known actor and musician. Sylvester is of Italian and French descent, but holds American nationality. He spent one part of his childhood in his hometown before the family moved to Washington D.C., where his father established a beauty school and his mother ran a women’s gym.

Talking about his education, Stallone attended Notre Dame Academy, after which he went to Lincoln High School in Philadelphia.

He also studied at Charlotte Hall Military Academy before he enrolled into Miami Dade College. From 1965 to 1967, he attended the American College of Switzerland, after which he studied Drama at the University of Miami from 1967 to 1969, however, he dropped out before completing his degree to pursue his professional acting career.

Sylvester Stallone made his acting debut as Stud in the 1970 softcore pornographic romantic film “The Party At Kitty And Stud’s”, which was followed by his performance in an off-Broadway play entitled “Score”, that was later made into the 1974 film of the same title. His breakthrough role came later that year, when he played Stanley Rosiello in the drama film “The Lords Of Flatbush”, alongside Perry King and Henry Winkler. The following year, he took minor roles in such film titles as “Death Race 2000”, “Farewell, My Lovely”, and “Capone”.

While working on the “Rocky” franchise, Sylvester Stallone also continued to work on other projects.

His directing debut was in 1978 when he directed and starred as Cosmo Carboni in the sports drama “Paradise Alley”, after which he didn’t achieve much success with his film titles until he took the role of Vietnam veteran John Rambo, in the critically and commercially successful action film “First Blood”, based on the novel of the same title by David Morrell, directed by Ted Kotcheff, and released in 1982. He reprised the role in its four sequels, entitled “Rambo: First Blood Part II” (1985), “Rambo III” (1988), “Rambo” (2008), and “Rambo: Last Blood” (2019), during which he became one of the highest-paid actors in Hollywood.

In 1986, Sylvester Stallone wrote and featured as Marion Cobretti in the box office success “Cobra”, an action film directed by George P. Cosmatos.

It was followed by his appearance in the co-lead role of Tango in the 1989 buddy cop action comedy film “Tango And Cash”, opposite Kurt Russell.

His next significant role was his portrayal of Gabe Walker in the 1993 action-adventure film “Cliffhanger”, in which he shared the screen with John Lithgow and Michael Rooker, and during the same year, he played John Spartan in the sci-fi action film “Demolition Man”, co-starring Wesley Snipes and Sandra Bullock. In 1994, he starred as Ray Quick in the action thriller film “The Specialist”, next to Sharon Stone and James Woods, and in 1997 he starred along with Robert De Niro in the critically-acclaimed crime drama film “Cop Land”, in which he took the part of Freddy Heflin.

Throughout the next decade, Stallone mostly made appearances in commercial failures. He starred in the role of a villain in the spy action comedy film “Spy Kids 3-D: Game Over”, the third installment of the “Spy Kids” film series and which was a huge box office success. After taking a three-year hiatus, he wrote, directed and portrayed Barney Ross in the 2010 action thriller film “The Expendables”, next to Jet Li and Jason Statham. It spawned two sequels, “The Expendables 2” (2012) and “The Expendables 3” (2014), in both of which he reprised the role. Parallel with that, he starred as Breslin in the 2013 prison action thriller film “Escape Plan” and its sequels, “Escape Plan 2: Hades” (2018) and “Escape Plan: The Extractors” (2019).

Most recently, in 2021 he provided the voice of King Shark in the DC Extended Universe superhero film “The Suicide Squad”. Regarding his upcoming projects, it’s announced that he will appear in such film titles as “Samaritan”, “Guardians of the Galaxy Vol. 3”, “The Expendables 4”, and “Little America”.