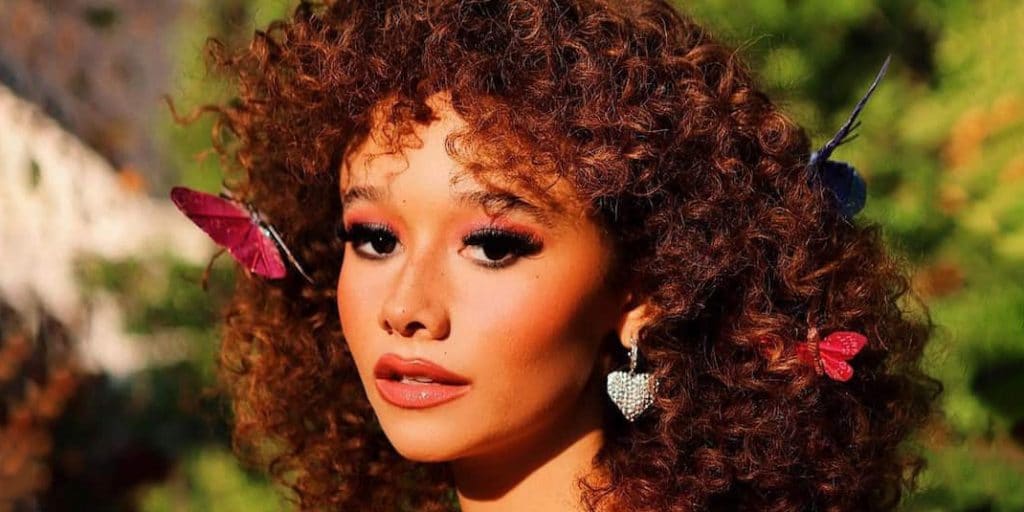 Who is Talia Jackson?

Talia Jackson is an American actress, perhaps best known to the world as Dusty Gable in the television movie “Raised by Wolves” (2017), and as Jade McKellan in the TV series “Family Reunion” (2019-2021), among several other roles that she’s portrayed so far in her career.

Talia Jackson was born on 28 August 2001 under the Virgo zodiac sign, in Madison, Wisconsin USA. She is the daughter of an African-American father Trent Jackson, who was a professional basketball player, and his now ex-wife Kelly Jackson, an international model.

She grew up in her hometown with her younger brother Armani, born in 2003, who is also an actor. Talia moved to Santa Barbara, California, following her parents’ divorce in 2009, and was thrown in to show business from an early age.

Talia’s career started when she was just eight years old, though not as an actress, but as a singer, one of the singers on Andrea Bocelli and David Foster’s tour for two Christmas seasons. Talia would still audition for new roles, though without any major success.

However, in 2012 she made her debut as Alexia in the biopic about Van Vlahakis, the man behind Earth Friendly Products, entitled “A Green Story”, starring Ed O’Ross, Shannon Elizabeth and Billy Zane. The same year, Talia was selected as Stella in short educational video “Disney English: Friends and Family”, and continued to portray Stella in the projects to come, including “Disney English: Move Your Body”, “Let’s Have Fun!”, “Arts and Crafts”, and “When I Grow Up”, among others.

Other than the part of Stella, Talia struggled to secure any role until 2017, when she was cast as Dusty Globe in the pilot episode of the TV comedy series “Raised by Wolves”. Unfortunately, the show wasn’t picked up by any network, so young Talia was thinking about ending her career.

However, luck smiled upon her, as she was selected for the role of Jade McKellan in the Primetime Emmy Award-nominated comedy series “Family Reunion”. She has starred in all 35 episodes alongside other stars, who include Tia Mowry-Hardrict ad Anthony Alabi among others.

The particular role re-ignited her love for acting, and also launched her to stardom. She portrayed Jade in the television movie “A Family Reunion Christmas” in 2019, and also guest-starred as Jade McKellen in the TV series “Game On! A Comedy Crossover Event” in 2020.

She has continued to pursue her dream, and is currently working on several projects, including the thriller film “Awakened”, in which she will co-star alongside Thunderbird Dinwiddie and Frances Turner, then, she is set to appear in the drama film “MVP”, scheduled for release late 2021, which will star Mo McRae Nate Boyer and Dina Shihabi.

Additional to her career as an aspiring actress, Talia has showcased her rich musical talents and has awarded fans with a few singles to date. It was the mandatory Covid-19 lockout that made her write and record music, so 2020 saw the creation of her first song, “Hidden”, followed by the song “5FIVE”, then “You”, which was released in 2021. She has received positive reviews for her efforts, and has promised her fans an album by the end of 2021.

As of late 2021, Talia Jackson’s net worth has been estimated to be around $300,000, earned through her increasingly successful career as an actress, during which she’s appeared in more than 20 film and TV series, all of which have added to her wealth, as have her musical endeavors.

When it comes to her personal life, Talia hasn’t been talking about her romances with her fans, and is keeping that part of her life cleverly hidden from the media. However, in her song “Hidden”, she has sung about a toxic relationship she had with one person and her experiences.

Although secretive about boyfriends, Talia has spoken publicly about her mental health. Diagnosed with anxiety, depression, and obsessive-compulsive disorder (OCD), Talia has said that she was on medication for some time, before she was hospitalized due to a liver and gallbladder infection, caused by anti-depressants that she had been taking. Since then, Talia has been off the prescribed drugs, and is focused more on the spiritual side, trying to treat her illness with meditation and positive thoughts.

Talia is pretty active outdoors, exploring nature and new areas, traveling to various destinations. She has rewarded fans with some of the sexiest pictures in bikinis and crop tops, uploading them onto her official Instagram page.

An avid animal lover, Talia especially enjoys the company of dogs and marine animals, and can often be seen at various pet rescue centers helping to run them in her free time.

To speak further of her work in the community, she has spread awareness of the treacherous Lyme disease, and has worked with the Global Lyme Alliance, helping the philanthropic organization raise money by organizing several fundraising events.

Young Talia has found inspiration in the likes of Chris Hemsworth and Scarlett Johansson, who are her favorite actors.