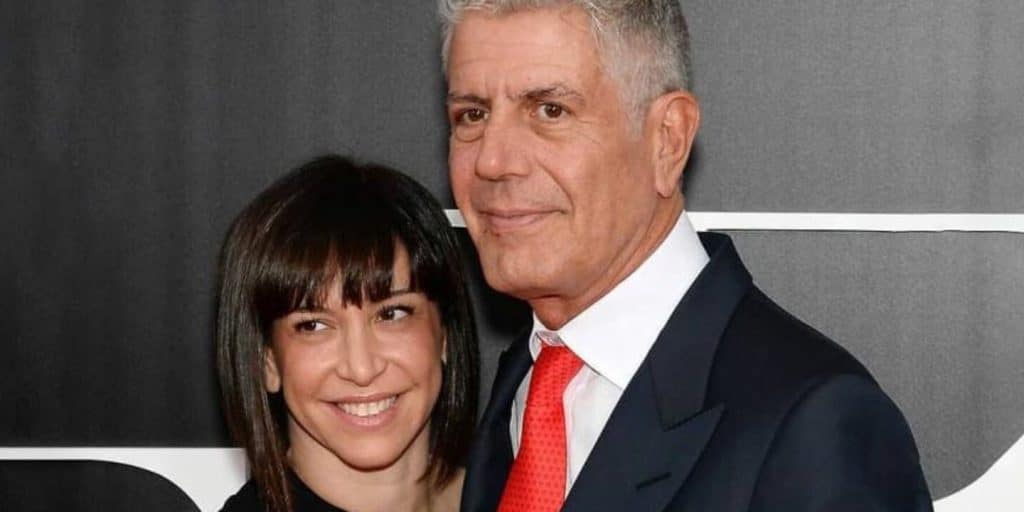 Who is Nancy Putkoski?

Nancy was born under the zodiac sign of Aries on 8 April 1955, in Fort Lee, New Jersey USA; she holds American nationality and her ethnicity is Caucasian. She is only known as the ex-wife of the late celebrity chef, Anthony Bourdain.

The truth about Nancy and her marriage with Anthony

Nancy was raised in Fort Lee, however, there isn’t much information about her childhood, parents, and their occupations; the only things that are known about her are from Anthony’s interviews with various magazines. He talked about her, saying that back in high school she was a ‘bad girl’, hanging out with drug addicts and local troublemakers, but she won him with her fearless and outspoken attitude.

She attended Dwight- Englewood High School, and upon matriculating in 1973, she enrolled at Vassar College, in Poughkeepsie, New York, from which she graduated with a Bachelor’s degree in Liberal Arts in 1976.

The Vassar College at that time was an institution of higher education mostly for women, but since Anthony and Nancy were already in a relationship, and she was a year older than him, he matriculated earlier, so they went to the college together even though he will be one of the few men there.

The two married in 1986, in a simple church ceremony in the presence of their families and friends. Nancy and Anthony shared their interests in traveling, watching Nancy’s favorite series “The Simpsons”, trying new flavors and food, but they also shared drug addiction.

The couple didn’t have children together, however, according to Anthony, they were enough for each other to be happy, but when he started working on television, Nancy wasn’t satisfied with how their lives were starting to change. Anthony told The New Yorker journalist: ‘I felt like the whole world was opening up to me. I’d seen things. I’d smelled things. I desperately wanted more. And she saw the whole thing as a cancer.’

His career was growing, so was their problems in marriage, and Nancy wanted him to choose between his life with her and his profession; on the other side, he thought that she was selfish, and so eventually in 2005, Nancy filed for divorce.

Subsequently, Nancy withdrew completely from the public eye; she doesn’t have any social media accounts, and she didn’t even want to participate in Morgan Neville’s documentary about Anthony. When he died, she didn’t want to give any statement or an interview about him, his death, or their relationship after they divorced.

Nancy keeps her private life a secret, and nowadays no one knows how she looks or what’s happened to her; it’s assumed that this 66 -years-old lady lives a peaceful life, away from the media’s attention.

Who is Anthony Bourdain?

Anthony Michael Bourdain was born under the zodiac sign of Cancer on 25 June 1956, in Manhattan, New York USA; he held American nationality and his ethnicity was of mixed French, Spanish and Jewish descent.

He was a celebrity chef, travel documentarian, writer, and cookbook author, who was perhaps known best for his food and world-travel television series “A Cook’s Tour” which was broadcast on the Food Network channel.

He was raised alongside his younger brother Christopher by their parents, mother Gladys who was a staff editor at The New York Times, and father Pierre who was an executive for Columbia Records; his mother was Jewish, and his father was Catholic, but they weren’t religious.

Anthony attended Dwight-Englewood School, and upon matriculating in 1973, enrolled at Vassar College, but after two years switched to The Culinary Institute of America, in New York City, from which he graduated with a Bachelor’s degree in Culinary Arts in 1978.

While at Vassar College, he worked in a seafood restaurant, which had inspired him to choose cooking as his future career. After graduating, he worked in various restaurant kitchens, such as Sullivan’s, Supper Club, and One-Fifth Avenue, among others, before he became an executive chef at Brasserie Les Halles, a French-brasserie-style restaurant in Manhattan, where he worked from 1998 until 2001.

Anthony published his first culinary mystery book “Bone in the Throat” in 1995, although it wasn’t successful as he’d hoped, he published his second book “Gone Bamboo”, which also sold poorly.

However, in 2015 an eponymous movie was filmed based on the book “Bone in the Throat”, starring John Hannah, Ed Westwick, and Vanessa Kirby.

In 2000, he published his bestseller “Kitchen Confidential: Adventures in the Culinary Underbelly”, and a decade later published his memoir “Medium Raw: A Bloody Valentine to the World of Food and the People Who Cook”; in the following years he wrote several other books, including another bestseller “A Cook’s Tour”, which was related with his travel show.

His career as a television host started in 2002, and for a year he worked for the series “A Cook’s Tour”, and then for the Travel Channel’s culinary program “Anthony Bourdain: No Reservations”, which was nominated for 16 award nominations and won four, including two Primetime Emmys; the series broadcast from 2005 until 2012.

His second television series for the Travel Channel – “The Layover” – was also successful, so were his series “The Taste” and “The Mind of Chef”, however, the most successful was “Anthony Bourdain: Parts Unknown”, which had 43 award nominations and won 28, including 12 Primetime Emmys; Anthony won awards for Outstanding Writing for a Nonfiction Program, and Outstanding Informational Series or Special.

After Anthony divorced Nancy, he met Ottavia Busia, an Italian businesswoman with whom he married on 20 April 2007, but before his second time as a husband, on 9 April 2007 he became a father for the first time, when Ottavia gave birth to their daughter Ariane, who was eleven years old when her father died.

Anthony was in a relationship with an Italian actress Asia Argento after he separated from his then-wife Ottavia.

On 8 June 2018, Anthony was found dead in his hotel room in Le Chambard hotel, in Kayserberg, France; without apparent explanation, he committed suicide by hanging. His body was cremated on 13 June 2018, in France, and his ashes were returned to the US on 15 June 2018.

At the time of his death, his net worth was estimated at $16 million.