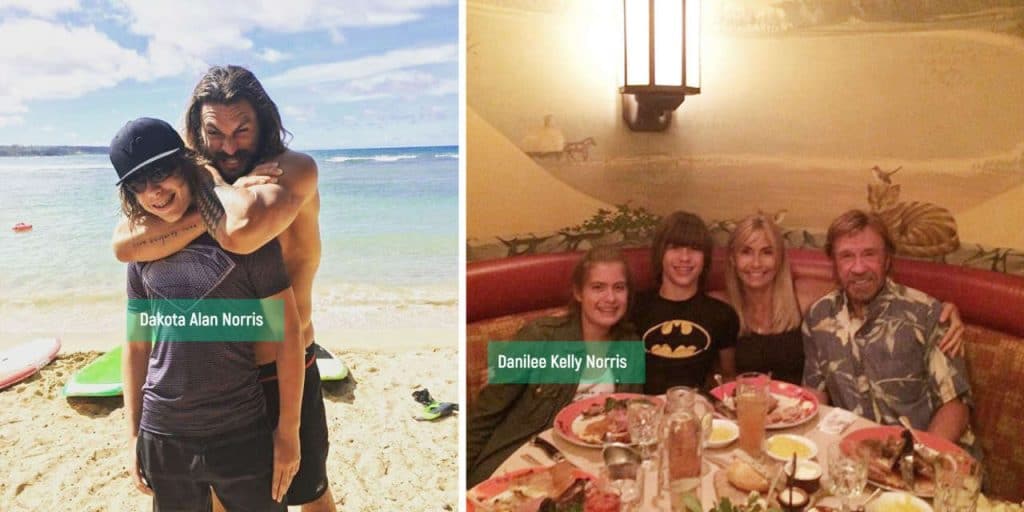 Who is Dakota Alan Norris?

Dakota is an American child celebrity, known to the world only as the son of famous actor and mixed martial artist Chuck Norris.

Dakota Alan Norris was born on 30th August 2001 under the Virgo zodiac sign, in California USA. The son of Chuck Norris and his second wife Gena O’Kelly, he has a twin sister Danilee Kelly Norris, born a month earlier than the due date; fortunately, there were no complications and the twins have remained healthy.

Dakota and Danilee aren’t the only children of Chuck Norris, as he has a failed marriage behind him and two children from it – Chuck was married to Dianne Holechek from 1958 to 1989 and has two children with her, actors Mike and Eric Norris. Moreover, Dakota has a third half-sibling, Dina Norris, who is the daughter of Chuck and his ex-girlfriend, Johanna.

From his mother’s side, Dakota has a half-sister Kelly Tagudin, and a brother Tim.

When it comes to his education, Dakota hasn’t disclosed which schools he attended, and if he has enrolled at any university.

Dakota Alan became interested in martial arts at an early age, and began training under his father’s guidance early on. In a short amount of time, he mastered Chun Kuk Do, and in 2015 received a 2nd-degree black belt under the coach Mr. Derrick Stinson. Since then, he’s improved to a 3rd-degree black belt in mixed martial arts.

Dakota Alan has started his own YouTube channel, and though he doesn’t have that many subscribers, he’s kept his dreams of becoming a popular YouTuber alive. He mainly uploads his and his father’s training sessions in the ring.

As of late 2021, Dakota Alan Norris’s net worth has been estimated to be around $200,000 earned through his involvement in mixed martial arts, and brand endorsements.

When it comes to his personal life, Dakota Alan has been rather tight-lipped and hasn’t shared much information about it. According to sources, he’s single and solely focused on his rising career.

Born Carlos Ray Norris on 10 March 1940, in Ryan, Oklahoma USA to Ray Dee Norris and his wife Wilma, he’s of Cherokee and Irish ancestry, and has two younger brothers, Wieland and Aaron. He lived in Oklahoma until he turned 16-years-old when his parents divorced, and would later live in Prairie Village, Kansas, and Torrance, California with his brothers and mother.

He served in the US Air Force as an Air Policeman from 1958 to ’68, and for some time was stationed in Osan Air Base, South Korea.

While there, after training in Tang Soo Do, and obtaining a black belt in the particular martial art, he got the nickname Chuck from starting the art Chun Kuk Do, which translates to Universal Way. After four years in the US Air Force, he opened a martial arts studio and began participating in martial arts competitions. At first, he was unsuccessful but over the years won several karate championships and titles.

However, despite a successful career as a martial artist, Chuck Norris is best known to the world for his roles in action films.

His acting debut happened in 1972, when he portrayed Bruce Lee’s nemesis in the film “The Way of the Dragon”. Throughout the decade he featured in a number of successful films, including “Good Guys Wear Black” (1978), and “A Force of One” (1979). In 1980 he was Scott James in Eric Carson’s action-drama film “The Octagon”, while in 1984 he started portraying Colonel James Braddock in the franchise “Missing in Action”. The sequel came out the following year, “Missing in Action 2: The Beginning”, and “Braddock: Missing in Action III” was released in 1988.

Other popular roles include the role of Scott in the film “Delta Force” (1986), and its sequel “Delta Force 2: The Columbian Connection” (1990), while from 1993 to 2001, he starred as Cordell Walker in the TV series “Walker, Texas Ranger”. Moreover, he played Booker in the film “The Expendables 2” (2012), one of his last on-screen appearances; his latest appearance was as Sgt. Major Phillips in the action crime-drama film “Hawaii Five-0” (2020).

Chuck Norris is also an author, and has published several books including “Winning Tournament Karate (1975), then “The Secret of Inner Strength: My Story (1987), “The Justice Riders” (2006), and “Black Belt Patriotism: How to Reawaken America” (2008), among others.

According to sources, Chuck Norris’s net worth has been estimated to be around $75 million, as of early 2022, earned through his eponymous career as an actor, and a mixed martial artist.