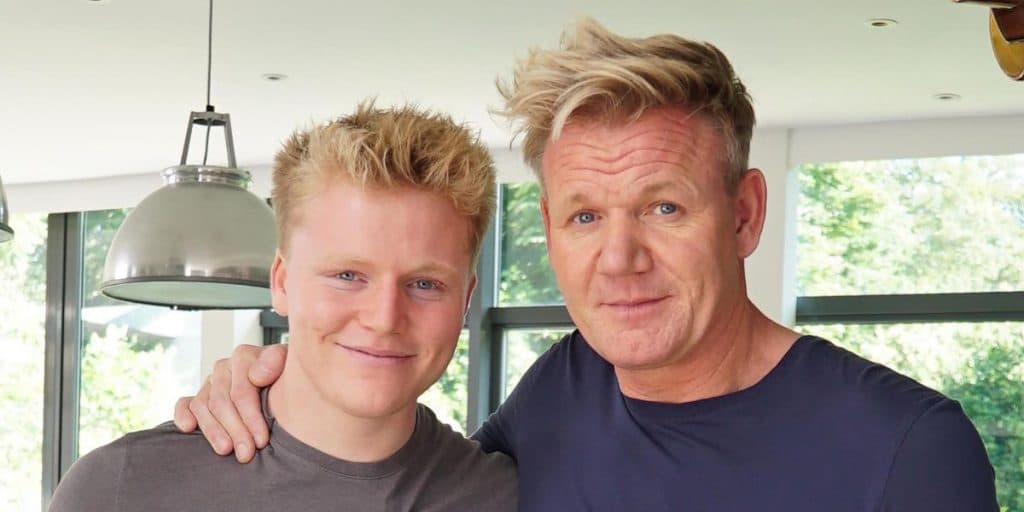 Jack Scott Ramsay was born in England, United Kingdom, on 31 December 1999 – his zodiac sign is Capricorn, and he holds British nationality. He’s a TV personality, perhaps known best for being the son of the British chef Gordon Ramsay, and the author Tana Ramsay.

Jack was an active child, and started participating in sports at a young age. During his high school years, he played rugby and water polo; furthermore, he also trained in Brazilian Jiu-Jitsu.

After matriculating, he enrolled at Exeter University in Devon, England, from which he graduated in 2020. In the same year, Jack joined the Royal Marines, which his father announced in a heartfelt Instagram post.

‘Can’t tell you enough how proud I am of this young man Jack Ramsay you’ve made me feel like the proudest father today congrats on joining Royal Marines what amazing achievement.’, Gordon said.

Jack made his TV debut at the age of five, in an episode of the documentary series about his father entitled “The F Word”. Five years later, he appeared alongside Gordon in two episodes of his hit reality show “Hell’s Kitchen”, in which he puts aspiring young chefs through difficult cooking challenges at his restaurant in Hollywood, California.

Jack’s TV breakthrough came in 2015, when he started appearing regularly in the cooking show hosted by his sister Matilda, entitled “Matilda and the Ramsay Bunch”. The series aired on CBBC network for five seasons, from 14 April 2015, and was filmed in various locations, including in Italy, London, and Los Angeles, California. It follows the Ramsay family during their summer vacations, with each episode featuring Matilda cooking a healthy meal to take out or eat at home. In 2016, she was met with criticism after appearing on “BBC Breakfast”, as some viewers took their complaints to social media, with one user asking ‘Why does my license fee pay for Gordon Ramsay’s kid to get her own show?’. Despite all this, “Matilda and the Ramsay Bunch” had very high viewership, and has become one of the CBBC’s most popular shows.

In 2019, Jack appeared in four episodes of the reality show “Born Famous”, which explores the life of celebrity offspring, and gives them a glimpse of what their life would be like if they were born into a non-celebrity family

Jack is a very private person, and doesn’t like talking publicly about his love life. However, being the son of an A-list celebrity, he often finds it hard to hide his private life from the fans. Two years ago, a photo of him kissing a mysterious girl circulated the Internet. The two were often seen together in the following months, and it was revealed that her name was Martha. They seem to have separated since, and Jack appears to be enjoying his life as a single man.

Jack hasn’t been married or engaged, and doesn’t have children.

In 2018, Jack took part in the London Marathon, along with his sister Holly, participating in memory of their late brother Rocky who passed away in 2016, with the aim of raising money for Great Ormond Street Hospital.

Unlike his siblings who are all very active on social media, and have hundreds of thousands of followers on their Instagram accounts, Jack prefers to stay away from social media, but previously had an account on Instagram, which numbered almost 200,000 followers.

Who is Jack’s father Gordon Ramsay?

Gordon James Ramsay was born in Johnstone, Scotland, on 8 November 1966 – his zodiac sign is Scorpio, and he holds British nationality. He’s an acclaimed chef, restaurateur and a TV host, probably known best for hosting culinary TV shows such as “Hell’s Kitchen”, “MasterChef” and “Kitchen Nightmares”.

Gordon grew up in Stratford, England, alongside his three siblings; their mother was a nurse, while their father worked as a shopkeeper. He has described his childhood as troublesome, as his father struggled with alcoholism, and the family often moved house. At the age of 16, he started working as a dishwasher in a local Indian restaurant, and soon moved out of his parents’ place.

Gordon’s job at the restaurant inspired him to pursue culinary education, and in 1985 he enrolled at North Oxfordshire Technical College. He moved to London soon after graduating, where he worked as a chef at the renowned Harvey’s restaurant, under Marco Pierre White. Gordon left after almost three years, stating that it was too difficult to work with White, who had severe anger management issues.

He then studied French cuisine, and worked in several restaurants in France. Upon his return to London in 1993, he was offered a head chef spot at the three-Michelin-starred restaurant, La Tante Claire. Five years later, Gordon opened his own restaurant in London, simply called Restaurant Gordon Ramsay, which gained its first Michelin star three years later.

His empire rapidly grew, and he opened another London restaurant, and others in Glasgow, Los Angeles and Montreal, Canada.

Gordon made his TV debut in 1997, when he served as a guest judge on the cooking show “Easy Money”. In the following year, he appeared in the documentary “Boiling Point”, and its sequel “Beyond Boiling Point” in 2000. In 2004, he made his TV breakthrough, as he began hosting the reality show “Ramsay’s Kitchen Nightmares”, along with the cooking competition show “Hell’s Kitchen”. He was soon cast to host the American versions of both shows, which skyrocketed Gordon’s popularity, and he became known for his explosive TV persona and harsh criticisms of the contestants.

In the past few months, Gordon has also become one of the most successful creators on the video sharing platform TikTok. His funny videos in which he criticizes aspiring TikTok chefs are amassing millions of views and likes, while his account ‘@gordonramsayofficial’ numbers more than 26.4 million followers and over 400 million total likes.

Ramsay has been married to the author and schoolteacher Cayetana ‘Tana’ Elizabeth Hutcheson since 1996.