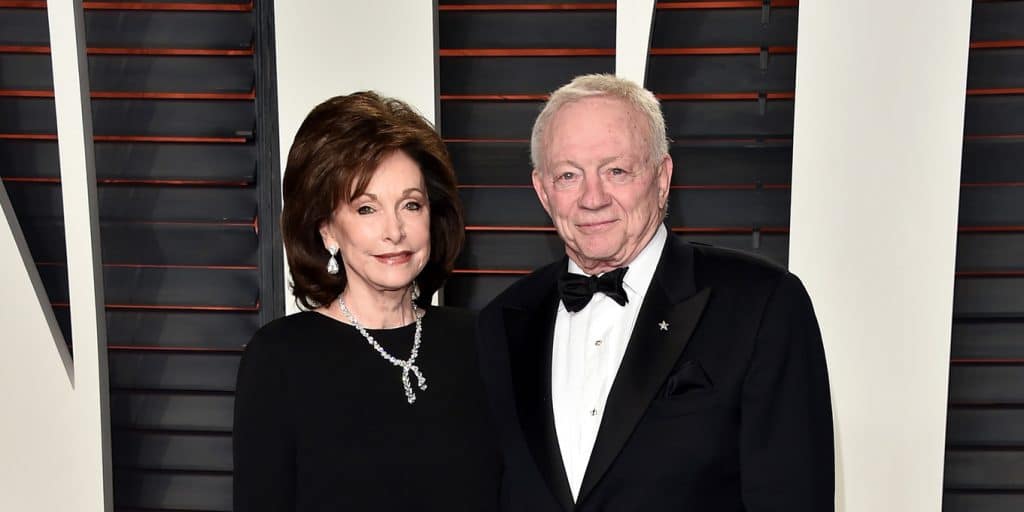 Who is Eugenia Jones?

Eugenia Jones was born as Eugenia Chambers in 1944; the exact date of her birth is unknown, but it is known that she was born in Arkansas, USA, so holds American nationality, and her ethnicity is White. She is perhaps only known as the wife of Jerry Jones, president, general manager, and the owner of the Dallas Cowboys, a professional American Football team, of the National Football League (NFL).

Eugenia was raised in Arkansas by her parents John Ed Chambers and Patricia Sloan Chambers; there is no information about siblings, and so it’s assumed that she’s an only child.

She attended a local high school, and upon matriculating in 1962, she enrolled at the University of Arkansas, from which she graduated with a Bachelor’s degree in Management in 1966.

While she was at college, she participated in pageants, thus she was chosen Miss Arkansas USA.

The untold truth about Eugenia Jones

Although Eugenia is known as the wife of Jerry Jones, she is much more than just a ‘tycoon wife’; this woman is involved in her husband’s business, and serving as a social worker, participating in charity events. Eugenia set up funds for medical students who can’t afford tuition fees and other expenses, and organizes charity dinners to raise money for those in need.

Eugenia is a member of the Cultural Trust Board of Texas, and is known as an art collector – in her collection, she has various interesting artworks, which she exhibits under the name “Dallas Arts Collection”, so the public can enjoy them. She encourages and guides artists to create art, and then promotes their masterpieces at AT & T Stadium formerly Cowboy Stadium, in Arlington, Texas.

She is a member of the executive board of the Meadows School of the Arts, and in 2017, she and her husband gifted $5 million for renovating, and she stated: ‘We are proud to invest in nurturing young artists and connecting them with the broader community, both of which the Meadows School successfully achieves’.

Eugenia hasn’t spoken about her previous relationships, before she married Jerry in 1963; the two met on a blind date, which was arranged by their mutual friends.

Jerry took her to a festival, and tried to win a teddy bear at the fair game, however, no matter how much he tried, he failed; in one moment he told her to wait for him, and he went and bought her the biggest teddy bear, however, he didn’t tell her that he bought it.

They started dating, and he proposed to her after a year, and on 21 July 1964, the two welcomed their first son, Stephen. Two years later, on 26 July 1966, Eugenia gave birth to their daughter Charlotte, and their second son Jones Junior was born on 27 September 1969.

Today, Eugenia is the grandmother of nine grandkids.

During the years, Eugenia and Jerry seemed like a perfect couple, however, some rumors were saying that Jerry was cheating on her, and in 2014, Jerry was accused of sexual assault. The stripper Jana Weckerly, accused Jerry of making her rub his penis, groping her genitals, kissing her without her permission, and then making her watch while another woman gave him oral sex; there were some pictures taken by Jana proving that Jerry was with those women sometime in 2009.

Jones’ attorney said that these allegations are completely false, and that this is an attempt to extort and embarrass Jerry – a lawsuit against him was dismissed.

Eugenia hasn’t spoken publicly about this incident, and she maintained a dignified attitude, so as of December 2021, the two are still in marriage, which has lasted over 50 years.

In her spare time, Eugenia likes to listen to classical music – her favorite composer is Ludwig van Beethoven, and her favorite piece is “Misa Solemnis”.

She likes to spend time with her family, she likes shopping and traveling; her favorite destination is Rome, Italy.

As of December 2021, her net worth has been estimated at over $10 million.

Who is Jerry Jones?

Jerral Wayne ‘Jerry’ Jones was born under the zodiac sign of Libra on 13 October 1942, in Los Angeles, California USA; he holds American nationality and his ethnicity is White. He’s a businessman, known best as the owner, president, and general manager of the Dallas Cowboys.

After his birth, his family moved to North Little Rock, Arkansas USA; his parents Arminta and J. W. Pat Jones were the owners of Pat’s Super Market; Jerry has a sister, Jacquelyn.

He attended North Little Rock High School, where he was a football running back, and upon matriculating in 1960, he enrolled at the University of Arkansas, from which he graduated with a Bachelor’s degree in Business.

After his graduation, his family moved to Springfield, Missouri, and his father started a life insurance company, in which Jerry was an executive vice president; the company was successful, however, the family sold it, bought the 5,500-acre ranch, and started Buena Vista Animal Paradise, which is nowadays known as Wild Animal Safari.

Meanwhile, Jerry borrowed $1 million from the International Brotherhood of Teamsters, a labor union, to start his own business, Shakey’s Pizza Parlor restaurants, but that venture failed; he had several other unsuccessful ventures, before he began an oil and gas exploration business, which proved to be successful.

Jerry purchased the Dallas Cowboys on 25 February 1989 for $140 million – the 2020 National Football League (NFL) season was his 32nd as the owner of the Cowboys. During all these years, he was rewarded with numerous honors and awards, and in 2017 he was inducted into the Pro Football Hall of Fame.

As of December 2021, his net worth has been estimated at over $10 billion.