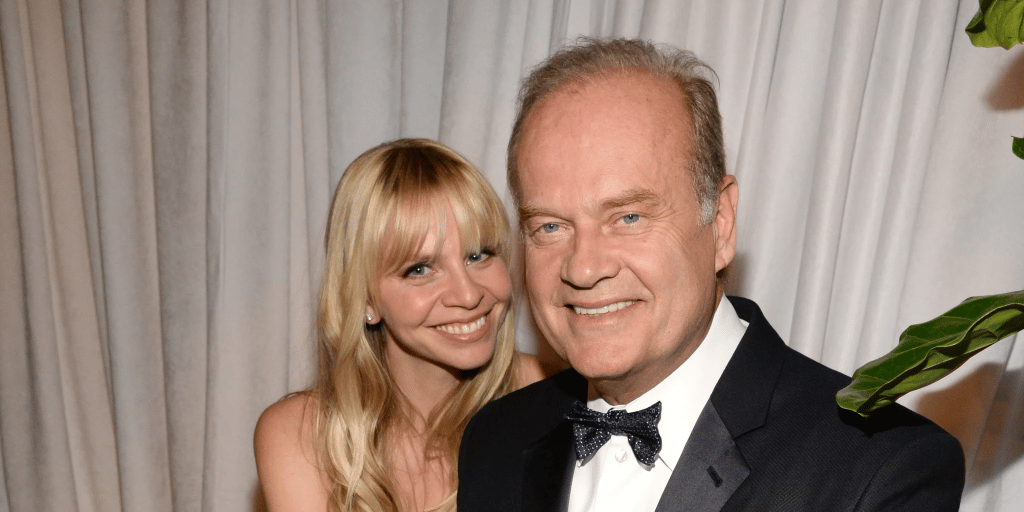 Who is Kayte Walsh?

Kayte Walsh was born in England, on 7 January 1979 – her zodiac sign is Capricorn, and she holds British nationality. She’s a reality TV star and a producer, but perhaps known best for being married to the “Frasier” star, Kelsey Grammer.

Kayte is the eldest daughter of the former English soccer player Alan Walsh, and his wife Susan. Kayte’s father played for Bristol City, Besiktas and Darlington, among others. During his career, he became known for being the early exponent of the stepover soccer trick, known as ‘Walshy Shuffle’, which was later popularized by Cristiano Ronaldo.

Katye has a younger sister named Sophie, and a younger brother Phil, who is also a soccer player, for Dagenham & Redbridge. She matriculated from a local high school in 1997, but didn’t enroll at college, and instead worked odd jobs before she landed a job as a stewardess.

Despite being a daughter of a famed soccer player, Kayte has kept a low profile for most of her life, never appearing in media. That changed suddenly in summer 2010, when paparazzi caught her spending time with the former “Frasier” star, Kelsey Grammer. It was right after the actor filed for divorce from his third wife, former “Playboy” model, Camille Donatacci, which sparked rumors that Kelsey had been cheating on his then-wife, and that his affair is what ultimately caused their separation. After the pictures came out, it took only a few days for the magazine “Daily Mail” to reveal that the woman in photos was in fact, Kayte, who is 25 years Kelsey’s junior.

Kayte soon confirmed that she’s pregnant with Kelsey’s child, which caused even more public outrage. His ex-wife was also one of the main stars of the reality TV show “The Real Housewives of Beverly Hills” at the time, and the scandal became one of the most prominent storylines of the season, with Camille often putting the blame on Kayte for ‘ruining her life’.

While Kayte was still working as a flight attendant, she spent a lot of time in New York City, as she had to stop there frequently during her flights to the US, thus it’s speculated that that’s where the couple first met.

Kayte publicly revealed that she’s pregnant with Kelsey in June 2010, but in October Kelsey reported that she had unfortunately suffered a miscarriage. Amidst the scandal involving Kelsey’s former wife, the two announced their engagement in December 2010.

Kayte and Kelsey married in a private ceremony at The Plaza Hotel in New York City on 25 February 2011, only two weeks after the famous actor finalized his divorce from Camilla. For their first anniversary, the couple celebrated by renewing their vows at the Little Church of the West in Las Vegas, Nevada, but that wasn’t all – a few months later, Kelsey surprised his wife with another romantic act – having her name tattooed on his hip.

They welcomed their first child, a daughter they named Faith Evangeline on 13 July 2012, and two years later, Kayte gave birth to their son Kelsey Gabriel, and in 2016, they had another boy, Auden James.

Prior to landing a job as a flight attendant, in the late 2000’s, Kayte worked as an assistant producer and camerawoman on several British TV shows, which included “Tabatha Takes Over”, “The ½ Hour News Hour”, and “Game Show in My Head”.

After marrying Kelsey, she briefly returned to TV, but this time as an actress and producer. Kayte made her acting debut in the 2011-2012 crime drama series “Boss”, created by Farhad Safinia, and which also starred her husband. In the following year, she was credited as a writer and an executive producer for the short-lived TV show “WhyUGotDumped”, and also produced three episodes of “Betty White’s Off Their Rockers”, a hidden camera comedy series, in which a group of senior citizens guided by the actress Betty White, played pranks on younger people.

Kayte has laid off her TV work since then, living her life away from the media’s spotlight. She resides in Malibu, California with her husband and their three children.

Allen Kelsey Grammer was born in Saint Thomas, Virgin Islands USA, on 21 February 1955 – his zodiac sign is Pisces, and he holds American nationality. He’s an actor, comedian and a producer, perhaps known best for playing the title character, Dr. Frasier Crane, in the NBC sitcom “Frasier”, and its parent series “Cheers”.

Kelsey was born into an artistic family – his father, Frank was a musician and a coffee shop owner, while his mother, Sally was a singer and an actress. He had one sibling, a younger sister, Karen, and was raised by their mother in Pompano Beach, Florida. During his childhood and teenage years, Kelsey suffered a series of family tragedies. His father was killed in a home invasion in 1968, and seven years later, his sister was kidnapped and murdered in Colorado Springs.

Kelsey attended the local private high school in nearby Fort Lauderdale, Florida, and during his time there discovered his talent for singing and acting. He won a scholarship to study drama at the renowned Juilliard School in New York City, however, following his sister’s murder he was unable to attend classes, and was eventually expelled.

This didn’t stop Kelsey from pursuing an acting career, and he started a three-year internship with the Old Globe Theatre in San Diego, California, shortly after leaving Juilliard. In 1981, he made his Broadway debut as Lennox in a modern production of Shakespeare’s “Macbeth”, before taking on the lead role a few months later. In the following years, he appeared in more Broadway plays, including “Othello”, “Sunday in the Park with George”, and Harvey Firesteins’s “La Cage aux Folles”.

In 1984, Kelsey made his debut as Dr. Frasier Crane in the NBC sitcom “Cheers”. Although he was initially cast to appear in only six episodes, the producers liked his performance so much that he instead became a regular in the show. “Cheers” aired from 1982 to 1993, and was one of the most popular TV comedies at the time, along with “Seinfeld”. Kelsey’s appearance in the show marked his TV breakthrough, and he’s had many more notable roles since then.

One of them was the voiceover role of Sideshow Bob in “The Simpsons”, which won Kelsey an Emmy Award for Outstanding Voice-Over Performance. In 1993, he became the main star of the “Cheers” spin-off series “Frasier”, which has become one of the most successful spin-offs in the TV history. Along with staring in the series, Kelsey also directed 30 episodes, and sang the closing theme “Tossed Salads and Scrambled Eggs”. “Frasier” aired until 2004, receiving wide critical acclaim, along with numerous awards – it’s still holding the record for most Emmys won by a comedy series, while Kelsey himself was rewarded with four Primetime Emmys in the Best Actor in a Comedy Series category. As of 2022, Kelsey is set to star in a revival set of “Frasier”, which was announced in 2021.

In 2005, he produced and starred in the American version of the British TV series “The Sketch Show”, however, the show only aired for four episodes. After a series of unsuccessful projects which followed, Kelsey received acclaim for his portrayal of a fictional politician in the Starz crime drama mini-series “Boss”, which aired in 2011 and 2012. It was his first role in a non-comedy TV series, and for his performance, he was rewarded with the 2012 Golden Globe for Best Actor in a Television Series. Since then, Kelsey has made numerous guest appearances in popular sitcoms, such as “30 Rock”, “Unbreakable Kimmy Schmidt”, and “Modern Family”.

Kelsey has been married four times, and has seven children from all his marriages. His first wife was the dance instructor Doreen Alderman, with whom he was married from 1982 to 1990, although they separated in 1984. He married his second wife, Leigh-Anne Csuhany in 1992, but called for the marriage to be annulled after a year, claiming that Leigh was violent and abusive. In 1997, he married the dancer and model Camille Donatacci, after dating for more than a year.

Kelsey is a public endorser of the Republican Party; in the recent years, his political views have sparked controversy, as the famed actor has voiced his support for ‘pro-life’ movements, and skepticism over the scientific consensus on climate change. He has expressed interest in running for US Congress in the near future.

As of January 2022, his net worth has been estimated at more than $80 million.