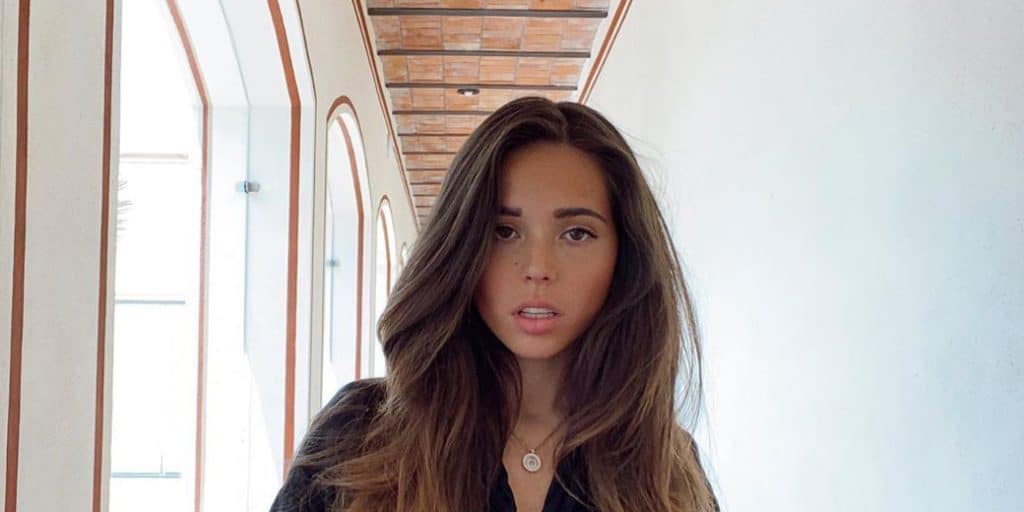 Who is Aneliz Aguilar?

Aneliz Aguilar was born in the USA on 7 April 1998 – her zodiac sign is Aries, she holds American nationality, and is of Mexican descent. She’s a social media star, but who’s perhaps known best for being a daughter of Pepe Aguilar, a famous Mexican-American actor and singer-songwriter.

Aneliz grew up being interested in singing just as her siblings, however, it didn’t take long for her to realize that she might not be as talented as the other members of her family. She became sporting upon enrolling at Oaks Christian School, and took on tennis and soccer, while she occasionally played volleyball with her friends. Aneliz was also into acting, and enjoyed appearing in school plays.

She matriculated in 2016, and because she hasn’t spoken of her further education, most of her fans believe that she hasn’t attended college.

Aneliz is an Instagram star, as she’s today followed by close to a million people, while she’s uploaded over 600 pictures onto the network, most of which have been taken during her everyday life, and thus reveal a lot about Aneliz. She likes to drink coffee and wine, and her favorite food is pasta. She’s a huge lover of animals, and her pet dog can be seen featured in some of her Instagram pictures. Aneliz has also revealed that she’s passionate about travelling, and has been to various US states, as well as to a couple of European countries, including France and Italy.

She launched her Twitter account back in 2013, and had over 100,000 followers prior to deleting it for unknown reasons.

Aneliz has a Facebook profile, but is apparently using it just to keep in touch with her closest friends and family members.

Aneliz is highly secretive when it comes to her love life, and hasn’t spoken of any boys (or girls) whom she has perhaps been with. This is mostly why there are various rumors circulating the internet, concerning her past and present relationships, as well as her sexual orientation.

Some of her fans believe that she’s a lesbian, and that this is why she prefers to keep the details of her love life to herself. A fan has also claimed to have seen Aneliz being rather too close to her female friend at a party, but no evidence has been provided to support these rumors.

There are also those who believe that she’s in a relationship, but doesn’t want her Instagram fans to know about it because of how the relationship might affect her popularity on the internet; this hasn’t been confirmed either.

As of December 2021, Aneliz seems to be single, hasn’t married and doesn’t have children.

Aneliz is physically highly active, and has multiple training sessions at the gym every week, thus her slim figure; she’s apparently only working out because it’s important for her ‘career’ on the internet to stay in shape.

Aneliz is a fashionista, and most of her Instagram pictures feature her wearing new clothes; she’s a shopaholic, as she goes shopping for clothes two to three times every week.

Summer is her favorite season, mostly because she enjoys showing off her body at the beach, but also because she likes to sun tan and swim in the ocean.

Aneliz likes to watch movies late at night, and her favorite actor and actress are Leonardo DiCaprio and Julia Roberts, while a couple of her favorite films include “Titanic”, “Notting Hill” and “Runaway Bride”.

Who is her father Pepe Aguilar?

Jose Antonio ‘Pepe’ Aguilar Jimenez was born in San Antonio, Texas USA, on 7 August 1968 – his zodiac sign is Leo, and he holds both American and Mexican nationality. Since he launched his career as a musician in 1989, Pepe has sold more than 12 million albums, and has won numerous awards, including four Grammys and five Latin Grammys.

Pepe was raised in San Antonio alongside his four siblings, by their mother Flor Silvestre who was a famous Mexican singer and actress, and their Mexican father Jose Pascual Antonio Aguilar Marquez Barraza who was a famous singer, and who sold more than 25 million records.

Pepe was only three years old when he joined his father on stage when performing at New York City’s Madison Square Garden, and he instantly fell in love with music. He became a rock fan during his teenage years, and mostly enjoyed listening to Pink Floyd.

He released his debut single “Pepe Aguilar Con Tambora” in 1989, and his first mariachi album “Recuerdame Bonito” came out in 1992. He became famous in Latin America and Mexico in 1998, when his album “Por Mujeres Como Tu” was released, then on 9 February 1999, Pepe released his new album “Por El Amor De Siemre”.

He received his own star on the Hollywood Walk of Fame on 26 July 2012.

Pepe is today running his own record label Qeuinoccio Records, and also has his own fashion line Pepe Aguilar Linea de Calzado.

His wife and brother were once kidnapped for ransom, while his son Jose Emiliano Aguilar was arrested on 14 March 2017 for human trafficking; according to the police, Jose tried to smuggle four Chinese men into the US in his car’s trunk.