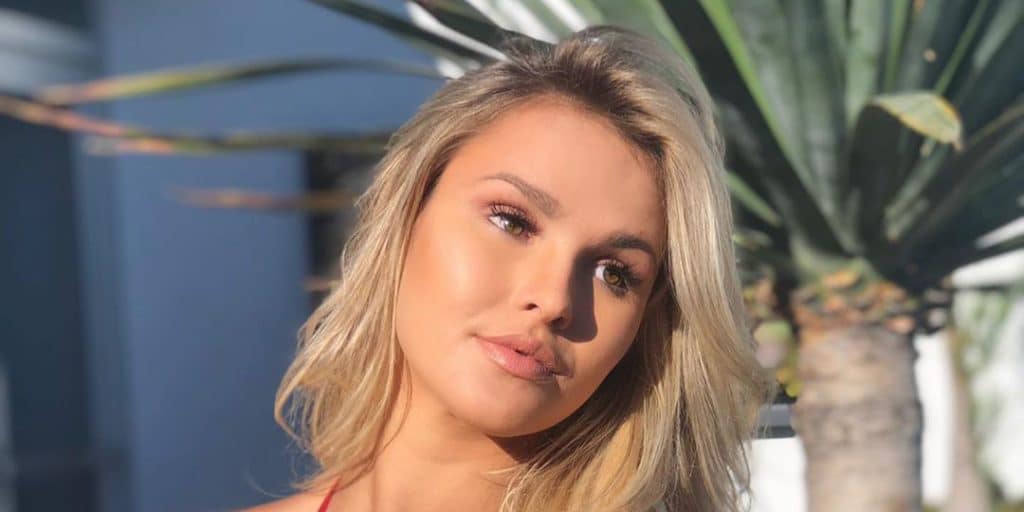 Who is Kinsey Wolanski?

Kinsey Wolanski is an American model, actress and social media sensation, who achieved fame by streaking during the 2019 UEFA Champions League final match between Liverpool and Tottenham Hotspur F.C. Since then, she has amassed millions of fans on social media platforms, and launched both acting and modeling careers.

Kinsey Sue Wolanski was born on 30 August 1996 under the Leo zodiac sign, in Sacramento, Clifornia USA. Of Russian ancestry, she grew up in her hometown alongside her younger brother.

From an early age, Kinsey started showcased an interest in modeling, and while in high school that interest went through the roof, and after gaining support from her parents, Kinsey had a few pictures taken, and sent them to a modeling agency.

Upon matriculation, Kinsey didn’t to enroll into any college, but pursued her professional career as a model. Thanks to her stunning looks, fashion brands and magazines fought for her services, and she was soon appearing in advertisements and magazines. She graced the cover page of the BLVD magazine, and then featured on FHM, Sports Illustrated, and Maxim, among others.

In 2017, she was one of the participants in the Miss Jetset 2017 and finished eighth in the beauty contest.

In her early career, Kinsey would upload pictures of herself in skimpy clothes, preferably bikinis, or topless, which only increased her popularity.

Kinsey was becoming more popular with every new picture, and she achieved around 1.5 million followers on her Instagram page. However, it was once she met her now-ex boyfriend VitalyzdTV that she upped her game, and turned into a star. She started being featured in his YouTube videos, and thanks to his popularity, Kinsey’s fame also began increasing. In 2019, she performed a stunt when she ran out on the football field in a bikini.

Players and fans were stunned by her action, as she was soon caught and escorted off the field, then spent six hours in jail, but it certainly helped grow her career.

She gained over three million followers on Instagram and other social media platforms, but perhaps unfortunately those accounts have since been deactivated, although Kinsey’s name has been resounding ever since. She has been able to launch her acting career, improve her modeling work, but also become a YouTube star, a fitness instructor, and a real estate investor.

Kinsey launched her YouTube channel in 2017, and now has around 200,000 subscribers.

Her videos encompass a number of topics, from pranks to real-life situations and struggles. She’s attracted more than 17 million views – some of her most popular videos include “Sugar Daddy in Public Prank with Tanner Fox!!!”, uploaded in early 2021 but which has more than nine million views, then “Weird Workouts In the Gym Prank!!!”, with over two million views, and “Crazy Thailand Trip With Dan Bilzerian and His Girls!!!”, watched just over a million times.

In addition to modeling, Kinsey always looked up to the actors and wanted to become one.

Her dream came true in 2019, when she appeared in the horror film “Slasher Party”. Since then, she’s appeared in a couple more projects, including the comedy film written and directed by Charles Arthur Berg entitled “Ass Clowns: Constipated”, and is working on the comedy film “Best Sheep”, which is currently in pre-production.

Kinsey has been training in the gym for years now, and has combined her love for modeling and working out into one, KinseyFit, a clothing line launched in 2021 intended for those who are looking to close the gap between quality and affordability.

By accessing the webshop you can buy various leggings, biker shorts, jackets, training bras, and other athletic wares.

Kinsey has outdone herself since running out onto the football field in 2019. In January 2020, she interrupted the Men’s Slalom at the FIS Ski World Cup, paying tribute to the tragically deceased Kobe Bryant by racing out from the crowd half-naked, and posing with a poster that read “RIP Kobe”.

When it comes to her personal life, Kinsey has rarely talked about it.

She was in a relationship with VitalyzdTV from 2018 to 2020 when they broke up for unknown reasons; neither of them has talked about their split. Since then, Kinsey has kept to herself, and hasn’t talked much about her personal aspirations. According to sources, she is single and focused on her career.

As of late 2021, Kinsey Wolanski’s net worth has been estimated to be around $3 million, earned through her career as a model, actress, and social media star.

This prominent model has blonde hair and hazel eyes.

Kinsey is known for her outgoing personality, and always wanting to try something new. Unfortunately, in early 2021 she broke her collarbone in an accident while snowboarding, through being a fan of extreme sports. To speak more of her activities, she spends a lot of time in the gym, or is almost always out hiking or surfing.

She loves to travel, and has visited all continents except Antarctica.

She is an avid animal lover and has said that horses are her favorite animals.