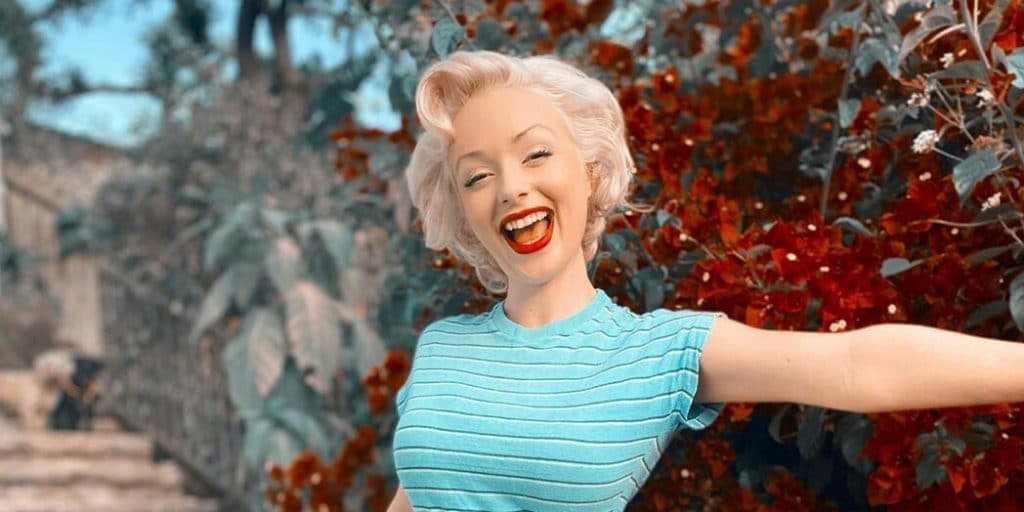 Who is Jasmine Chiswell?

Jasmine was born in Glasgow, Scotland, on 9 December 1993 – her zodiac sign is Sagittarius, and she holds both British and American nationality. She’s a social media star, YouTuber, actress and film director, but who’s perhaps known best for her TikTok account, which is today followed by close to 15 million people, and numbers nearly 700 million views of all her videos combined. Jasmine today uploads diverse content, but she initially attracted attention for a single thing: for looking very similar to the late American actress, model and singer Marilyn Monroe.

Jasmine was raised in Glasgow alongside her two brothers by their parents, about whom nothing’s known, as she respects their privacy.

She grew up being interested in a number of activities, including dancing, playing soccer and acting with her school’s drama club. Jasmine studied at a local high school in Scotland, and dreamed of becoming a doctor during her four years there. Her parents distorted her focus by divorcing, and she then failed some of her most important high school exams, meaning that she had to give up on pursuing medicine. As she’s shared in one of her TikTok videos, Jasmine believed that at that point her life wasn’t worth living.

She created her social media accounts only for fun, but the videos in which she dressed up and behaved as Marilyn Monroe attracted a lot of attention, and made her famous. After Jasmine began making money online, she chose to make a career out of her popularity on the internet.

Jasmine launched her YouTube channel on 26 January 2013, and it’s today subscribed to by close to 500,000 people, and numbers nearly 100 million views of all her videos combined. Most of her former videos featured her dancing and singing while being dressed as Marilyn Monroe, however, Jasmine’s today more focused on uploading videos which show her spending time with her son; we’re going to mention three of her most popular YouTube videos, which have helped her attract many subscribers.

Jasmine’s second most watched video “Wearing Sweatpants For The First Time In 5 Years! 😲 #shorts” has been viewed close to 10 million times since 19 January 2021 – the title’s quite self-explanatory.

Jasmine is today mostly focused on running her TikTok account, but is still highly popular on a couple of other social media networks.

She’s followed by close to 1.5 million people on Instagram, and has uploaded over 600 pictures onto the network, most of the recent ones featuring her and her baby boy. Jasmine has revealed many things about herself in her Instagram pictures, including that she’s a fashionista, and is keeping up with all of the latest fashion trends by reading the most popular fashion magazines, such as “Vogue” and “Cosmopolitan”; she’s also a shopaholic, as she goes shopping for clothes every week.

Jasmine has a Facebook page, as well, and it’s today followed by nearly 10,000 fans.

In 2014, Jasmine produced and directed the short horror mystery movie “It’s Not Real”, which follows Tip and Luke who have been invited to check out a haunted castle.

She worked as a script supervisor on the 2018 short movie “Sepia”, written and directed by Vicente Almuna, who also starred in it alongside Emad Alaeddin and Ben Leland Earl. The movie follows a man who’s been denied entrance into his own country, and now has to cross the desert to reach his home; it won three of the four awards for which it was nominated.

Jasmine has recently worked as a second assistant director and portrayed Party Girl in the short drama film “The Other Night”; the movie has been completed, but is yet to be released. Written and directed by Sommer Garcia, it also stars Samantha Labrecque and Cristiano Queiroz.

Prior to meeting her husband and while she was still living in Scotland, Jasmine was in a long-term relationship with a non-celebrity British man, but they broke up not long before she moved to Los Angeles, California. After a couple of months in Los Angeles, Jasmine started using dating apps, but her first couple of dates weren’t good; she has shared in one of her TikTok videos that none of those men wanted to really meet her, and weren’t ready for a serious relationship and commitment.

She matched with her now-husband Maverick McNeilly on the dating app Bumble, and they chatted for several weeks before finally going out on a date. Maverick took Jasmine to the beach, and they became inseparable after only that single date. The two moved in together after a couple of dates, and in less than a year married in a private ceremony, attended by only a couple of their closest friends and family members.

Maverick is today working as a music producer.

In January 2022, Jasmine gave birth to their son, but his name and exact birthdate remain undisclosed.

Jasmine hasn’t spoken of any other men whom she’s perhaps been with, and as of February 2022, she’s married to Maverick McNeilly, and they have a son together.

Jasmine and her husband are actually living in Marilyn Monroe’s old Hollywood home.

She’s physically highly active, and has multiple training sessions at the gym every week, thus her slim figure. Jasmine is also following a strict diet, meaning that she avoids eating fast food and anything with sugar in it, and often gives her fans advice on working out and dieting.

She likes to listen to music while doing household chores – her two favorite singers are Rihanna and Beyonce.

Jasmine enjoys watching movies with her husband in the evenings, and her favorite actor and actress are Will Smith and Julia Roberts, while a couple of her favorite films include “Bad Boys”, “Independence Day” and “The Runaway Bride”.

As of February 2022, Jasmine’s net worth has been estimated at over $3 million.