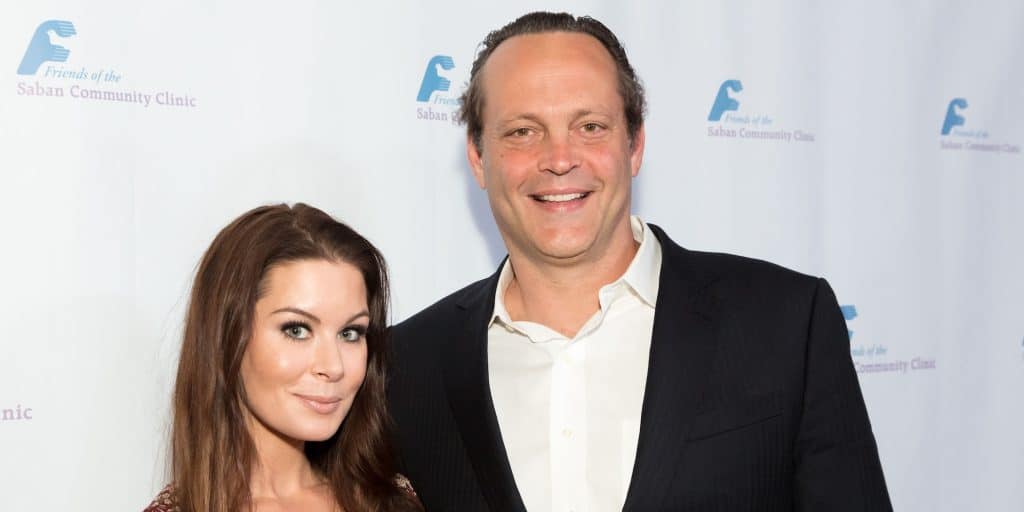 Who is Kyla Weber?

Kyla Weber was born in Okotoks, Alberta Canada, on 1 July 1979 – her zodiac sign is Cancer, and she holds Canadian nationality. She’s a real estate agent, but known to the general public for being the wife of the American actor and comedian, Vince Vaughn.

Kyla was born to Marcia and Ken Weber, and grew up in Calgary, Canada. Not a lot is known about her early life or where she attended school, as she prefers to keep that information private.

Kyla graduated college in 2001 with a degree in business, and soon started working as a realtor. She initially worked for a local company called Coco Homes – Cimarron Living for a few years, before moving to the USA. There, she continued her career as a realtor, but later started focusing more on pursing a career in visual arts.

Kyla and Vince reportedly met in 2008 at a wedding, after being introduced by a mutual friend. According to Vince, the two immediately hit it off, and they became engaged on Valentine’s Day the following year. It was reported that Vince proposed to his soon-to-be-wife with a diamond ring valued at over $100,000.

The couple tied the knot in a private ceremony on 2 January 2010, held at the historic Armour House at Lake Forest Academy in Illinois. After Kyla and Vince married, they became the subject of media’s attention, and were frequently followed by paparazzi, in addition to appearing together on various red carpet events.

Vincent Anthony ‘Vince’ Vaughn was born in Minneapolis, Minnesota USA, on 28 March 1970 – his zodiac sign is Aries, and he holds American nationality. He’s an actor, comedian and a filmmaker, who rose to stardom with his role in the 1996 comedy drama movie “Swingers”.

Vince was born into an affluent family; his mother, Sharon, is a successful real estate agent, who was once named one of the top money managers in the US by “Bloomberg” magazine, while his father, Vernon, worked as a salesman for a toy company. Vince comes from a diverse ethnic background, having Lebanese, Italian, German, Irish and English ancestry.

He spent most of childhood in Buffalo Groove, Illinois, and was a very active child, who participated in many sports such as football and wrestling. He later moved to nearby Lake Forest, where he attended Lake Forest High School, from which he matriculated in 1988. During his time there, Vince was introduced to musical theatre, and decided to become an actor.

In 1988, he was cast to appear in a national TV commercial for Chevrolet, and subsequently moved to Los Angeles, California, to pursue more acting opportunities. In the following year, he appeared in several episodes of the war drama series “China Beach”, along with three CBS “Schoolbreak Specials”.

Vince made his film debut in the 1993 biographical drama “Ruby”, in which he played the role of the Notre Dame football tailback, Jamie O’Hara. He achieved wide recognition in 1996, with his role in the comedy drama film “Swingers”, directed by Doug Liman. The movie followed a group of single, unemployed Hollywood actors during the 1990s swing revival. It was both a critical and commercial success, and has been included in several year-end best movies lists.

As his popularity grew, in 1997 Vince was cast to star in Steven Spielberg’s blockbuster “The Lost World: Jurassic Park”, which gave him even more exposure, and opened the door for Vince to star in other high budget Hollywood movies. In the following years, he appeared in numerous films, including “Return to Paradise” (1998), “The Cell” (2001) and “Old School” (2003).

In 2004, he starred alongside Ben Stiller in two hit comedies, “Dodgeball” and “Starsky & Hutch”, and was subsequently labeled as one of the members of ‘Hollywood Frat Pack’, a group of actors who frequently co-star in comedy movies. One of the most notable roles for Vince was in the 2006 comedy film “Wedding Crashers”, directed by David Dobkin, and which also starred Owen Wilson, Christopher Walken and Rachel McAdams.

The film centers on two divorce mediators, who frequently crash weddings in hopes of meeting women. It was a huge box-office success, grossing more than $200 million worldwide, against a $40 million budget, and helped revive the popularity of adult-oriented comedies. In the same year, Vince starred alongside his then-girlfriend, Jennifer Aniston, in the comedy drama “The Break-Up”.

In 2007, Vince took a short break from comedy, appearing Sean Penn’s critically acclaimed drama “Into the Wild”, based on the real-life story of the adventurer Christopher McCandless.

In the following years he had starring roles in comedy movies “Couples Retreat” (2009) and “The Dilemma” (2011), and also worked as a producer for the reboot of the CBS sitcom “The Brady Bunch”, which originally aired in 1974.

More recently, in 2016, Vince starred alongside Colin Farrell, in the second season of the HBO critically acclaimed crime drama series “True Detective”, while in 2020, he starred in the horror-comedy movie “Freaky”, in which he played the roles of a serial killer and a teenage girl who switch bodies.

Prior to marrying Kyla, from 2005 through 2006 Vince was in a relationship with the “Friends” star, Jennifer Aniston,. At the time, their relationship was a subject of many tabloid magazines, which eventually led to their breakup.

In late 2006, Vince filed a lawsuit against three magazines for falsely claiming that he had been unfaithful to Jennifer. They separated in November the same year, but stayed on friendly terms.

Vince politically aligns himself with the Libertarian Party, and has expressed his opposition to gun control laws.

He has been training Brazilian Jiu-Jitsu as of 2016, and received his blue belt in February 2018.

As of February 2022, his net worth has been estimated at more than $70 million.