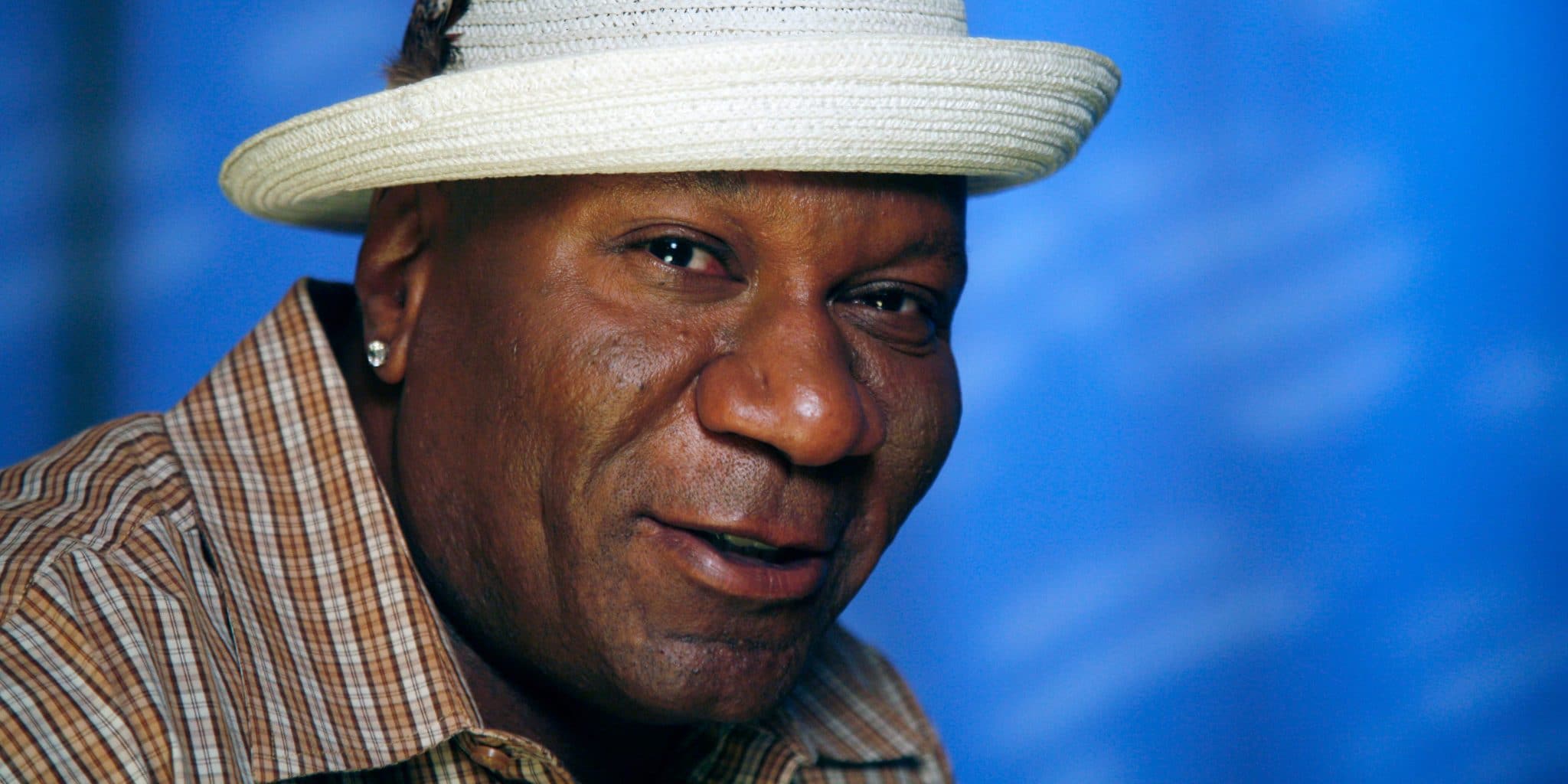 Who is Ving Rhames?

Irving Ramesses ‘Ving’ Rhames was born in Harlem, New York City USA, on 12 May 1959 – his zodiac sign is Taurus, and he holds American nationality. He’s an actor, film script writer and producer, who has appeared in more than 130 movies and TV series, while he’s probably still known best for his portrayal of Marsellus Wallace, in the 1994 crime movie “Pulp Fiction”. It was written and directed by Quentin Tarantino, starred John Travolta, Uma Thurman and Bruce Willis, and follows the lives of a gangster and his wife, a boxer and two mob hitmen; the movie won 71 awards, including an Oscar for Best Writing, Screenplay Written Directly for the Screen for Quentin Tarantino, while it was nominated for 75 other awards.

Ving was raised alongside his brother Junior Rhames in Harlem, by their parents Reather and Ernest; not a lot is known about Ving’s family, as he respects their privacy.

He became interested in acting while still attending a local elementary school, mostly because his drama teacher cast him to appear in several school plays. Upon enrolling at New York’s High School of Performing Arts, Ving became a member of its drama club, and started thinking about launching an acting career; he was also into sports during his four years there, focusing mostly on football.

Upon matriculating in 1977, Ving enrolled at SUNY Purchase, and it was there that he was given his nickname ‘Ving’ by the American actor, film writer and producer Stanley Tucci Jr. Ving eventually switched to the prestigious Juilliard School, from which he graduated with a Bachelor of Fine Arts degree in 1983.

Ving made his debut film appearance in the 1984 drama “Go Tell It on the Mountain”, while a couple of his following roles were in the 1986 romantic drama “Native Son”, the 1988 biographical drama “Patty Hearst” and the 1989 action crime drama “Casualties of War”.

He gained recognition in 1990, when cast to play George in the mystery horror drama “Jacob’s Ladder”, directed by Adrian Lyne, and which starred Tim Robbins, Elizabeth Pena and Danny Aiello. It follows a Vietnam War veteran whose child has just died; the movie won three of the four awards for which it was nominated.

In 1996, he was cast to play Luther in the action adventure thriller “Mission: Impossible”, directed by Brian De Palma, and which starred Tom Cruise, Jon Voight and Emmanuelle Beart. The movie follows an American agent who’s been accused of disloyalty, and won three of the 20 awards for which it was nominated.

A couple of Ving’s other notable performances by the end of the ‘90s were in the 1997 historical action drama “Rosewood” and the action crime thriller “Con Air”, then the 1998 crime comedy drama “Out of Sight”.

In 2002, Ving voiced Cobra Bubbles in the animated adventure comedy “Lilo & Stitch”, written and directed by Chris Sanders and Dean DeBlois, and which starred Daveigh Chase, Chris Sanders and Tia Carrere. It tells the story of a young girl who has adopted a dog which is actually a dangerous alien; the movie won 11 of the 39 awards for which it was nominated, including an Oscar nomination for Best Animated Feature. Ving was then invited to appear in a couple of award-winning movies – the 2004 action horror “Dawn of the Dead”, the 2006 musical crime drama “Idlewild”, and the 2007 romantic comedy “I Now Pronounce You Chuck & Larry”.

He was cast to play one of the main characters, Conrad, in the 2014 biographical crime drama “Jamesy Boy”, directed by Trevor White, and which also starred Spencer Rocco Lofranco and Mary-Louise Parker. It follows a young gang member who has been sent to jail, and has there befriended a murderer.

Ving made his debut TV series appearance in the 1985 episode “Go Tell It on the Mountain” of the romantic comedy drama “American Playhouse”, and gained recognition in the following year, when cast to play Czaja Carnek in the romantic drama “Another World”.

It was created by Irna Phillips and William J. Bell, starred Victoria Wyndham and Constance Ford, and follows the people living in Bay City; the series was a huge hit, winning 43 of the 120 awards for which it was nominated, including a Primetime Emmy nomination.

By the end of the ‘80s, Ving made a guest appearance in an episode of various series such as the action crime drama “Miami Vice”, the action war drama “Tour of Duty”, and the mystery crime drama “Spenser: For Hire”.

He then became focused on appearing in movies, and has since had roles in only a couple of TV series. He appeared in the 1991 episode “Murder in Oakland” of the drama “Screenplay”, and in the 1995 episode “Olde Tyme Religion” of the crime drama “New York Undercover”.

In 2001, he appeared in three episodes of the action drama “UC: Undercover”, playing Quito Real, and a couple of his notable performances in the 2000s were in the animated adventure comedy “The Adventures of Jimmy Neutron, Boy Genius” (voice role), the crime drama “The System”, and the historical documentary “Freedom: A History of Us”.

Ving’s most recent TV series role has been his portrayal of the main character Dr. Jorge Villanueva, in all the 10 episodes of the 2013 drama “Monday Mornings”. It was created by David E. Kelley, also starred Jamie Bamber and Jennifer Finnigan, and follows both personal and professional lives of five surgeons; the series was nominated for two awards.

He received special thanks for the 1998 short documentary video “Inside ‘Out of Sight’”.

He has eight producing credits, which include the 2005 action crime film “Back in the Day”, the 2007 historical film “Ascension Day” and the 2010 fantasy thriller movie “King of the Avenue”.

Ving has made a guest appearance in numerous talk-shows, such as “The Tony Danza Show”, “Last Night with Conan O’Brien” and “Up Close with Carrie Keagan”.

Some of his other wins include a 1994 Awards Circuit Community Award for Best Cast Ensemble, for “Pulp Fiction”, a 2001 Locarno International Film Festival Special Mention for “Baby Boy”, and a 2006 DVD Exclusive Award for Best Actor, for his performance in “Animal”.

Ving has married twice. On 4 July 1994, he married the non-celebrity American woman Valerie Scott – the two divorced on 9 February 1999, for unknown reasons; there are rumors circulating the internet, claiming that they split because of jealousy issues, but this hasn’t been confirmed.

Ving hasn’t mentioned any other women whom he has perhaps been with, and as of November 2021, he’s married to his second wife Deborah Reed, and has two children with her.

Ving was physically highly active when he was younger, and had five to six training sessions at the gym every week; he still works out nowadays, but only once or twice a week.

Ving likes to travel, and his acting career has made it possible for him to travel all around the world; he has been to nearly all of the US states, and various European, African and Asian countries. His dream travel destination is Lyon in France.

Uma Thurman and Ving Rhames on the set of Pulp Fiction, 1994

Ving is a philanthropist, and has donated money to many charity organization, while mostly to those which work with underprivileged children.

He has his own favorite actors and actresses, some of whom are Al Pacino, Robert De Niro and Scarlett Johansson; a couple of Ving’s favorite movies include the franchise “The Godfather”, “Scent of a Woman” and “Lost in Translation”.

As of November 2021, his net worth has been estimated at over $25 million.