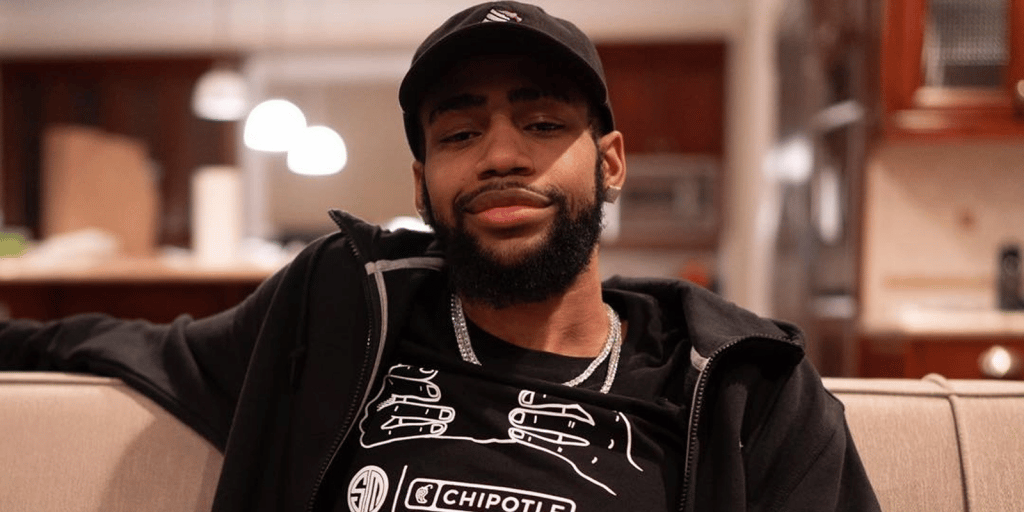 What happened to TSM Daequan? Dead? Net Worth, Girlfriend

Daequan Loco – better known online as TSM Daequan – was born under the zodiac sign of Taurus on 12 May 1994, the exact birthplace of Daequan is unknown but somewhere in Florida USA; he holds American nationality and his ethnicity is African-American. He’s a YouTuber, Twitch streamer, and professional Fortnite player, who rose to prominence as a member of the Team SoloMid, and since then has uses the abbreviation ‘TSM’ beside his name.

Daequan was raised in Florida; although there were some rumors that he was adopted, he was raised by his biological parents, however, he prefers to keep his private life a secret thus he hasn’t disclosed any information regarding their names and occupations. He also hasn’t talked about any siblings, so it’s assumed that he’s his parent’s only child.

He attended a local high school, where he played basketball, and with his team won the Florida State Championship. Upon matriculating in 2012, he didn’t enroll at college since he didn’t get his scholarship because of his on-court altercations, and his parents couldn’t financially help him.

Daequan worked various jobs, saving up money to buy himself a computer to full fill his dream of eventually becoming a professional gamer.

On 15 November 2017, Daequan launched his eponymous YouTube channel, which is today subscribed to by over five million people; his videos have amassed nearly 700 million views.

In February 2018, he became a member of TSM, and in March of the same year set a World Record for most eliminations in a Fortnite Game, 39 in a game by himself in a Teams of 20 matches, however, in April 2018, a YouTuber Teegzy set a new World record of 45 eliminations.

On 10 May 2018, Daequan alongside Ali ‘Myth’ Kabbani, the founder of the team, and another Fortnite player Hamlinz, moved into their own house in Los Angeles, California.

During his professional gaming career, Daequan has played numerous games at a competitive level, such as GunZ, Smite, Black Desert Online, and Destiny 1 PvP, among others. He talked about his membership in TSM saying:

‘I really feel blessed that TSM is an organization that I could join. It’s important to me that Reginald was also an eSports player so he can understand what it’s like for us and relate. Being a part of this organization is beyond words and I am grateful to each and every one of you that has been a part of it and I can’t wait to see what the future holds for us. We have an amazing team with genuine personalities and I hope to build lasting relationships between all of us and that we are able to grow not only our businesses and channels but as people as well and go on to do great things in the future.

I have no doubt in my mind that we won’t be 100% successful in all that we encounter!’

Daequan’s videos are mostly related to Fortnite. He’s known for his hilarious quotes, and is one of the best and funniest Fortnite players, helping him to reach great heights of popularity.

His most viewed video is “40 KILLS ALONE? | WORLD RECORD | MOST KILLS EVER IN FORTNITE HISTORY – (Fortnite Battle Royale)” uploaded on 10 May 2018, has been viewed over 21.5 million times.

Daequan’s second most viewed video “HEAVY SHOTGUN + HAND CANNON IS INSANE! | DEAGLE IS SO FUN – (Fortnite Battle Royale)” was uploaded on 20 Jul 2018, and has amassed nearly eight million views, and over 150,000 likes.

There were various rumors both concerning Daequan’s love life and his sexual orientation, however, it’s widely known about his relationship with his girlfriend, Exie, who is living with him in the house in Los Angeles. There isn’t much known about her, except that she’s from Russia, likes video games, cats, traveling, and food.

The two started dating in 2018, and Daequan revealed that she’s helping him prepare content for his channel, since she’s a gamer, too.

On 21 November 2019, Daequan tweeted: ‘My girl has life-threatening health issues now, and it’s lowkey destroying my mental state, man. We go to so many doctors & hospitals & specialists, and they have no idea what to even say to us anymore.‘

In March 2020, he tweeted that Exie is getting her medical treatment in a foreign country and that she’s getting better.

On 6 September 2021, on the YouTube channel More NRG Thoom House, was uploaded the video entitled “Daequan and Hamlinz introduce NRG Exie”, and in the video, they were talking about Exie and the stuff that they like about her.

She was in the video also, talking about how much she enjoys living with Daequan and the rest of the guys in the house.

As of February 2022, Daequan is still in a relationship with Exie, he hasn’t been married or engaged, and doesn’t have children.

Daequan is also active on social media platforms Instagram, Twitter, and Twitch; his Instagram account has been followed by nearly 4.5 million people, while his Twitter has gained nearly two million followers. His Twitch profile has over four million followers, and all of his videos combined have been viewed over 50 million times.

What happened to him and is he dead?

Dequan once talked about him suffering from depression, because when he was younger he was affected by unknown sickness which caused him to stay home for three and a half years at. In May 2019, he shared with his fans that his illness was back, ‘The worst type of stomach problems are the ones where you don’t know what the cause is so you’re just always in pain/nauseated and don’t know how to make it go away, sorry for the lack lately.. it’s highkey driving me insane Hopefully we figure it out soon, I’m trying’, he tweeted.

On 23 July 2019, he tweeted that he’s feeling better and that he’s hoping that soon he will be back, however, on 13 September 2019, he promised that he will upload a video and talk about what happened to him. He was supposed to return to streaming in January 2020 but didn’t and so started rumors about him being dead, which were false.

As of February 2022, Daequan has returned to streaming and posted on his Instagram on 26 January 2022: ‘I’ll be live at Twitch.tv/DaequanWoco. See you there lets talk. Miss ya. Hope all of you have been doing okay and staying safe.’

He is now streaming daily, and an army of his followers is thrilled that their favorite Twitch streamer is back.

As of early 2022, his net worth has been estimated at $2 million, while he has a minimum income from his YouTube channel of $35,000 per month.

How rich is Trisha Paytas’ husband Moses Hacmon? Net Worth